Hello Chaps!  You may or may not know that Sunday 8th September is Pre-Raphaelite Brotherhood Day (or #PRBDay for Tweeters) and there will be all manner of shenanigans this year as it is also 25th Anniversary of the Pre-Raphaelite Society here in Great Britain!  Goodness, cake all round!  Anyway, last year there was a poll of people's favourite Pre-Raphaelite painting on Twitter, but I though it might be fun to have a little vote on here.  Obviously, I want to hold a Fanny Vote. 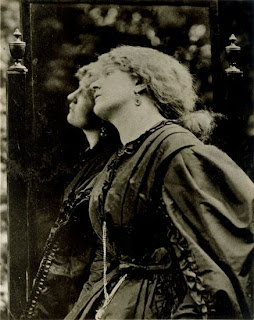 Over the next few days I will be posting up some pictures of Fanny Cornforth and I'd like you to either post your vote here, on the Stunner's Boudoir page on Facebook, or by email (stonellwalker@googlemail.com) and on Sunday 8th September I shall reveal your favourite images of Madam Cornforth!  Such larks!

Okay, today we shall start with the oil and watercolour paintings of Fanny.  Here are a few suggestions but feel free to shout out some more.  Any you suggest that aren't illustrated here I'll pop up on the Stunner's Boudoir!

Actually, there aren't that many oil paintings of Fanny as her reign as Rossetti's sole muse was sadly very short.  She appeared first as the fallen woman in Found...

The figures were finished, but the rest of the canvas was neglected as Rossetti fell out of love with the subject.  After all, why should the prostitute feel any shame when the woman who modelled for her didn't seem to.  Is this a more realistic portrait then?

Ah, the Kissed Mouth!  There is a girl who is fond of a kiss and fond of a guinea.  While this is often thought to be a 'portrait', it really isn't, it's another part that she played in Rossetti's mind.  Here we have Fanny as the luxurious, sexual equal, constantly waiting to be embraced.

I think possibly my favourite oil painting of Fanny is the rare oil portrait...


It has the look of a fire-lit portrait, as if he painted her one evening as they sat by the fireside and she thought about the future.  I love her expression, distracted, hidden, absorbed.  She looks like she is already worrying about her lover but he is too blind to see it, even as he paints her.


Despite my love of the little circle portrait, it doesn't mean that I don't love his other major oils of Fanny between 1860 and 1865.  Fazio's Mistress is such a 'senior' work, by which I mean it looks like there is no doubt in Rossetti's eye that this was what he imagined and wanted.  Fanny inhabits a role of certainty, binding her hair into plaits as surely as she binds her lover to her.  All is luxury and excess, all is fantasy and warmth.

I didn't realise that Woman Combing her Hair is often known as Fazio's Mistress as well.  I link it more readily with Lady Lilith in my mind, but all are images of women preparing their hair for the male gaze.  I love the colour of Fanny's hair in the watercolour of her combing her hair, so rich and gingery, clashing with the red at her neck.  It is a picture of excess, but has a tension rather than the relax of luxury.  She seems to have almost too much hair, trapped under her elbow and catching in the comb.  The woman seems to shy back but is trapped in the small space, cluttered by bric-a-brac and her own physical opulence.


Talking of opulence, this is a painting I would merrily steal.  It is one of my favourites yet I often overlook it when talking of Fanny's career as it is tucked away in the period of the Rossetti marriage.  At first glance it is a traditional waiting maiden, one of Rossetti's many women who seem to exist to loiter.  Look closer and the flush on her cheek and chest is almost indecent.  She is all pink and blush, feeling the excitement grow as the cord her lover is following tightens.  The green glass around her highlights that rosy tint, and all of her is blood and heat.  Look at the roses on her dress and how they reflect the one caught in her hair.  Exquisite!


Last but not least is the painting it is impossible to reproduce.  The Blue Bower is a riot of blue and green, sharp and fresh, and I've never seen Fanny's skin look so clear and pale, like china.  The use of flowers in the canvas drives me to plant up my garden with cornflowers and passion flowers and it is at once cheeky and classy.  Plus she has one of the most delicious hairclips I have ever seen.  This is Fanny's swan-song from Rossetti's eye, neglected back to a 'practice muse' after this, but it is a hell of a finale.

Right then, I need you to vote for your favourite oil, either on this page, on the Stunner's Boudoir on Facebook (I will have a link to this post and you can leave comments below it) or you can email me direct with your vote or if you have any other suggestions.  Tomorrow will be pencil and pen drawings and Wednesday will be chalks, and you have until Saturday 7th September to cast your vote in all three categories.  Your favourite pictures will be revealed on PRB Day on the 8th!

For Fanny's sake, get voting!
Posted by Kirsty Stonell Walker at 13:23