You might have guessed by now I love to research the lives of little-known women and equally love to read about other people's work to uncover the lives of those who have been neglected by historians.  Often the story of the search is as fascinating as what is uncovered.  That was absolutely the case with Nigel Daly's The Lost Pre-Raphaelite and I have the delight in recommending a new book to you today that delivers just such a dual narrative - Barely Clare: The Little-Known Life of Clare Mackail by Tim McGee... 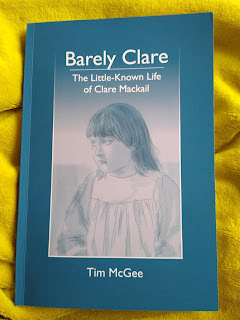 
I really loved this book for a couple of reasons.  Firstly, it's easy to read and an absolute joy.  I read it in one sitting because you are being told a story and you really care about what happens.  Also, that story is brilliantly set up with the premise that everyone thinks Clare had a boring life or is surprised that she even existed.  It's the sort of set up you know will be merrily knocked down by the end. Also, the text is interspersed with what other biographers have said about Clare, if they have bothered to mention her at all.  It's not good.  One even refers to her as 'simple'.  Lawks.

Clare Mackail obviously did not have an extraordinary life, well maybe not 'obviously' as it is possible for a woman of enormous talent and accomplishment to be utterly overlooked, but what she managed to achieve (or at least what Tim found, more may yet come to light) is still extremely interesting.  I especially loved her involvement with the Holst family and the performance of his music.  Also, the sections about Ralph Vaughan Williams are fascinating.  She moved in important circles and was involved in British music to a level that should get a mention when histories are being written.  Her turn to spiritualism and alternative worship is also a genuinely enthralling side of the Second World War that I have never considered or really been aware of and now feel I want to know more. That's the mark of a great book as far as I'm concerned.

The problem with researching little-known women is that there can often be little known, which sounds obvious but people only tend to remember or note down what (or who) they consider to be important.  Tim has done a brilliant job finding the threads and creating a picture of a life with them.  The story of his own travels and discoveries is marvellous - I especially loved his journey to find the house Clare lived in, which not only tells you about the place and the house, but everything you need to know about the author, who is exactly the sort of person you'd want to go on an adventure to find a lost house with.


Even if we weren't all in lockdown, you definitely would have time to read this, and as we are all in need of smashing things to read right now, I have no hesitation in recommending this joyous little book to you.  It won't break the bank, it will tell you loads of things you will not have known before and will add extra layers to things you do know. I'm sure you can get the book through your normal channels but here are the links to Amazon UK and USA as well.
Posted by Kirsty Stonell Walker at 12:51 No comments: