Review: The Beginning of the World

Good Morning, on this fine Sunday morning!  It seems appropriate that I'm reviewing a book about Mr God this morning, but fear not (should you fear such things, not sure why) this is a Pre-Raphaelite work of loveliness.  Today I am reviewing The Beginning of the World by Edward Burne-Jones. 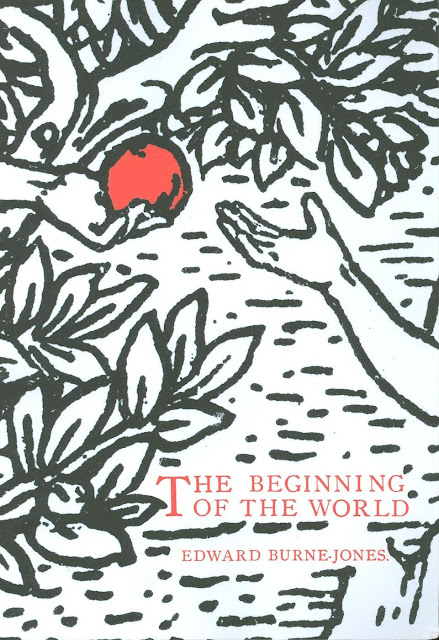 People who know me will know I own far too many Bibles.  It's true, in our house we have double-figures of religious texts, and every time an elderly relative dies, I tend to get their Bible and book of Common Prayer. I love them, especially the ones with illustrations and so when I was sent this book to review I was delighted.  The idea was that the Kelmscott Press would print a Bible (can you image how amazing that would be?) and so Edward Burne-Jones started work on some designs that would illustrate it.  Sadly both he and Morris died before the book could be completed, so Georgiana published what had been created in 1902.
In this reproduction of the 1902 edition, the publishers have left in Georgiana's introduction which states that the illustrations were made for 'Mr Mackail's Biblia Innocentium' due to be published by the Kelmscott Press, and containing 200 pictures.  However only 25 were produced (from Genesis) and so Georgiana gathered them with the appropriate text passages.

It's not a long book, only 23 pages long, and illustrated in black and white woodcuts throughout but it is charming and elegant in its interpretation of the scenes at the beginning of the Bible.  Each little image is filled with detail, scales on the devilish serpent, apples on the trees and all of it is filled with Burne-Jones brilliance.
The text covers the story from the Creation to Cain and Abel.  As a side note, there are twins who live round here called Cain and Mabel.  That, my friends, is a work of genius and I salute those parents. Anyway, Burne-Jones' illustrations are as beautiful as you would imagine.  Look at the last ones of the ill-fated brothers...

If you are a fan of Burne-Jones' figures then you'll love this, as all of them are elegant and perfect, like they always are.  I like that he never shies away from violence, and never trivialises it, but lends it a sort of shocking beauty.  I find this to be true of his other work, such as the Perseus story, but look at the figures of the brothers above.  Look at the way that Abel reaches for his brother's legs in pleading, but Cain's hand presses his brother's head down, with the other arm raised in preparation to strike.

The book is priced £12.99, which may seem a lot for such a slight book, but it is a chance to see a good reproduction of the work, in A4 sized pages.  The publishers Pallas Athene have taken trouble to present this work (and many others) in an attractive, accessible way.  More Burne-Jones in our lives is always a good thing...

To buy this from Amazon go here (UK) or here (US)

To see what else the good people at Pallas Athene have in store go here.
Posted by Kirsty Stonell Walker at 14:35