I'm still hiding from the inordinately hot weather (Fan, fan!  Swoon, swoon!) and so the second post of this weekend is about saving a beautiful painting from being lost from public view.  It's something we can do from indoors, so it is a winner in my book.

You lot obviously know how much I love the Watts Gallery in Surrey.  Where else can you see a giant Tennyson?  And their refurbishment has made them such a splendid, world class museum, the perfect home for the beautiful collection.  Anyway, they are presently trying to raise money to save a full-length portrait of Countess Cork by G F Watts from being sold into a private collection, and therefore not publicly accessible.

The painting was commissioned around 1860, when Watts was executing some of his most lush and elegant society portraits.  Despite having a lot of his later portraits, the Gallery don't have an example of his work from 1860 and this is such a splendid piece it would be marvellous to bring it home to the Gallery. 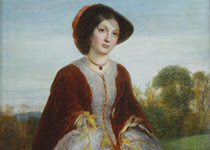 The Countess, Lady Emily Charlotte de Burgh is shown at her Somerset estate, aged around 32 years old.  In her hand is a peacock fan, an early aesthetic motif.  I think the truly astonishing part of the work has to be the foaming lace at the cuffs, painted in such a way that you can almost feel how soft and translucent those waves are, against the rich darkness of her velvet dress.  I think it's interesting that she had had four of her seven children by this point, but not a son yet (Charles came along in 1861 and Robert in 1864).  It's interesting to wonder, as the exact date of the painting is not known, whether it might be painted to celebrate the birth of the son and heir in 1861.  It is such a lavish, such a beautiful portrait, it feels like it was created for a special reason.

The Countess is being shown at the Watts for a limited time, so you have the chance to go and see her in all her finery before donating if you wish, but it would be lovely to help such a wonderful gallery to purchase this work so we can all enjoy it forever.

To read about the Watts campaign to raise money for the Countess, go here.

To give money to the Watts Gallery's Fund for Countess Cork, please go here.


Posted by Kirsty Stonell Walker at 08:07