Hello again and apologies for the brief break in service.  I have been busy at work on my book about Pre-Raphaelite women, due out at in the Autumn (and available for pre-order here (UK) and (USA), but whilst doing research and the suchlike, I started wondering about a word that kept being bandied about.  That word is 'Mistress'...


Language has power and it is up to us to see when more is being said than the mere words spoken or written.  This is definitely the case with the word 'Fat' (see this post) and 'Old' (see this post) which carry with them value judgments, but how about the word 'Mistress'?  What do we mean when we call a woman someone's mistress?


On the one hand, in a very basic way, 'mistress' is just the female version of 'master'.  This posh lady on a horse is married to the man who owns the house, I'm guessing, but just her very regal presence on her equally regal horse makes her the boss of the moat.  Look how the various birds look at her with birdy respect.  She is in charge of everything, well, until her husband gets home.


Moving on, the word 'mistress' is often said in a possessive sense, as in 'my mistress' (or in the case above 'mistress mine'). It's difficult sometimes to define exactly how this is meant - a servant might refer to his mistress but then it means something different to when a man says it.  When the man in the above painting asks the question 'o mistress mine, where are you roaming?' is he asking as he equal or her inferior?  Is the inference one of respect or possession?  Also, being called a man's mistress is a very loaded term...


So, I'm writing my mini-biographies of 50 Pre-Raphaelite women and one word that comes up quite a bit is 'mistress'.  For women like Lillie Langtry, it refers to her relationships with married men, although half the time she too is married, so what is the equivalent term for chaps who have affairs with married women?  Also, with women like Lillie, many of the men she was having affairs with weren't married so they definitely count as the male equivalent of 'mistress' - 'masters'?  no, that has the connotation of being the superior partner in a relationship that definitely isn't one of equality.


This is probably what most people think of when they think of Victorian mistresses.  This young lady is a 'kept woman', in her own luxurious little house in St John's Wood, where her rich gentleman acquaintance can pop in for a tickle on her ivories.  He is married, she is not, least of all to him.  He is wealthy, she is not, and everything she now possesses is courtesy of her chap with the implication that he can remove it as swiftly as he bestowed it. If she is his mistress, he very definitely is her master.


Look at this woman: he's given her a bunch of flowers, what more does she want? There is a definite sense that women, when provided with nice furniture and a very pleasant tea-service should be available for naughtiness.  There is an unspoken (but very loudly hinted at) commercial transaction going on.  She is what we think of as a mistress, a sort of luxury item that rich men have.  Do poor men not have mistresses?  Is that a word that also then has socio-economic implications (get me with the big words)? Therefore, is 'mistress' the sort of word you use for a rich man's poppet, when if she was involved with a poor man, you'd call her a rude name?  A bit like 'mad' and 'eccentric', it's what people say when they'd like to insult you but you're too rich, so they can't.


The reason I started my meandering through all this was because of Emma Hill.  Reading the many different accounts of her and Ford Madox Brown's relationship, she is repeatedly described as his 'mistress'.  Admittedly, a couple of months ago, I didn't know very much about Emma and Brown so assumed, because of the 'mistress' tag, that Brown was still married when he started shacking up with Emma.  However, he had been widowed and Emma was his model who declared her love for him.  They were both free and single so why is she is his 'mistress'?


Type in 'mistress' in Bridgeman Art Library and lo and behold you get Jane Morris.  Undoubtedly, she did have an extra-marital affair but the 'marital' was on her side, so why is she 'mistress'?  Such is the link between sex and inspiration in the narrative of Pre-Raphaelite art, that we seem to use the words 'muse' and 'mistress' interchangeably.  The women are seen as the lesser-partners in all this, what they bring to the party is sex and nothing more.  It's not just about being married/unmarried, but also the status of men both in and out of wedlock.  'Mistress', once a term simply denoting the woman in charge of something, has now become irreversibly linked to sex, and not only that but relationships, like that of Emma and Brown, are made implicitly about sex and with the understanding that it isn't a partnership.


Is it too loaded a word for us to use now?  Leaving aside the rights and wrongs with messing about with married men, what does it say about our use of language that we have changed the meaning of a word to say something derogatory about women?  Even if we seem to be able to apply the term, without prejudice, to a woman in the past, once into the 19th century it becomes synonymous with sexually-available, bought woman, and not the coy-romance of the gentleman in the picture above who is sighing like a furnace 'with a woeful ballad made to his mistress' eyebrow'. In those terms, she is mistress of his heart, and possibly that window seat. It seems we have become quick to downplay not only women's role in relationships but the strength and meaning of those relationships.  It could be argued that there is a moral implication against the man who has a mistress that is not present in, for example, 'boyfriend and girlfriend'. Mind you, once you get past a certain age, it's hard to describe your partner as your 'boyfriend' if he has grey hair.  We need better words.

Now, what is the word for a single man having an affair with a married woman?  Okay, we all need to behave ourselves until we have this sorted out...

I love the National Portrait Gallery.  I don't think I have ever been to an exhibition there that I didn't adore or that they didn't do exceptionally well.  I still have really fond memories of the Millais Portraits exhibition they did many years ago.  They also do really good catalogues.  Anyway, enough of this swooning - to business! or rather, here is my review of the Victorian Giants exhibition that opened yesterday and runs until 20th May... 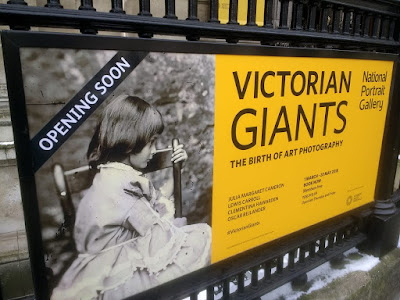 I was lucky enough to be invited to the press review and so spent time on Wednesday up in snowy London seeing how you could bring together the careers of Julia Margaret Cameron, Lewis Carroll, Oscar Rejlander and Clementina Hawarden, all pioneers in 'art photography' in the middle of the 19th century.  As we have discussed before, I have come across the work of all of them, but only written about Cameron, Carroll and Rejlander.  My knowledge of Hawarden was limited to 'she was a bit posh and did girls in sunlit rooms, like an arty Victorian version of Flowers in the Attic'.  I was delighted to learn more...


Short-lived Scottish aristo, Lady Clementina Hawarden didn't (in my mind, anyhow) seem to have a great deal in common with, for example, Lewis Carroll, but the genius of this exhibition is that they  not only show who bought whose photographs, but also put images together so you end up going 'Oh, I see...'


There are rather a lot of 'oh, I see' moments in the show, not only with what they show, but also if you bring your own knowledge to bear on what you see.  Hawarden's captive girls, caught by privilege and isolated by their gender, are clearly reflected in images of captive princesses, offered up as sacrifice.

The very dignified image of Lord Elcho and his little poppet of a son reminded me of that weird image of Tennyson looking very wary with Hallam on his knee, taken by Lewis Carroll.  They couldn't be more different in tone even though it is essentially the same image.  You begin to learn about the person behind the camera by what they think is okay to show in front of it.  I really think Carroll lacked the ability to distinguish emotional responses in his subjects because there are moments where you wonder why he chose that picture, that expression or response from his subject, but that also is what makes him an interesting chap, if a little controversial.


If you were hoping for a discussion about Carroll's motivation in his photography of children, this is not the exhibition for you, but then I'm guessing we're all grown ups and don't need that.  In fact, I found the NPG have done much to reintegrate Carroll's work into the mainstream and when seen in the context of others, he doesn't seem so weird. So when you take this...
in the same breath as this...


It just seems part of the same 'poverty as art' theme, whilst being equal parts conscience-raising and distasteful is not sexual.  Even when Carroll is being a bit 'dodgy', seen within the context of what others were doing, it loses some of its impact, for example...

It's all about context and what the others were doing at the same time.  I suppose, if I had a criticism, then Hawarden, with her beautiful girl-butterflies trapped in one room, shows the least range and doesn't participate in the sharing of subjects to the same extent the others do.  It's wonderful to see Lewis Carroll's images of Tennyson beside Rejlander's and Cameron's, not to mention the sharing of John Herschel and Charles Darwin between photographers.  When grouped like that you can enjoy the precision of Carroll, the dream-like qualities of Cameron and Rejlander's depth and wit.  Actually for me, Oscar Rejlander came out of this as a bit of a star.  Carroll lacks humour in his work but Rejlander has it in buckets, often straying into absurdity but always very well done.  He can also match Cameron for sheer beauty which made the part of the gallery with their photographs together an utter delight.


So in conclusion, this is gorgeous.  The way all four photographers moved in and out of each others lives is fascinating and Oscar Rejlander should be a national Swede-y hero for what he has brought to our photography heritage.  Boobs, for one thing.


Since the NPG acquired the Rejlander album last year, this exhibition has always been on the cards and in a way I wish they had done a one-man show but it is a wonderful blend of the familiar and the obscure, the great and the nude of Victorian society and I can't recommend it enough.  I'll end on my favourite image, which looks like a 1940s movie poster...


Victorian Giants: The Birth of Art Photography is on until May and further information can be found here.
Posted by Kirsty Stonell Walker at 08:35 3 comments: