Fanny Falls For A Modern World

There was a moment about three years ago that changed my life.  Actually, there were a couple and they happened almost simultaneously.  It was the Autumn of 2010 and I was going into hospital to have some plastic surgery and not feeling particularly cheery about the prospect.  One morning, there in my inbox was an email from an artist called Karen Jones and she had sent me an invitation to the opening of her exhibition entitled 'Muse'...

It doesn't take a genius to recognise Fanny Cornforth in this beautiful image.  Karen had been involved in a project where five Essex artists had produced works inspired by five Essex museum collections.  Karen had taken Rossetti's pencil sketch of Fanny as her inspiration as it belonged to the Beecroft Art Gallery.  It's clear to see how her work followed...

Beyond the Frame sought to look past the singular image to the story beyond, and for Karen, the story was of Fanny at Southend.  Filled with bittersweetness, a life of regrets and tiny victories, Fanny looks out from the pier and tries to piece together her identity from what her lover has made of her.  The picture of Fanny on the pier, above, contains elements of Found, Fair Rosamund, Belcolore, Lady Lilith, and Bocca Baciata.


In a way this is a reflection of how we, the viewer, construct Fanny from Rossetti's images and how Fanny herself seemed to play up to the part assigned to her by her lover.  Fanny is seen as both Jenny, fond of a kiss and fond of a guinea, and Ophelia, a lost love, wasted by her beloved's fickleness.

Plunging into the sea, Fanny is surrounded by pansies or violets, which translates as either (or both) faithfulness and loving thoughts.

In a graceful swoon, Fanny sinks to the depth of the ocean, the debris of her life floating away.  The letters they exchange drift from her grasp, the vases she stole tumble from her, and her hair and beads spread out.

My favourite of the images has to be The Shore which is accompanied by a passage from 'Jenny': 'Our learned London children know, Poor Jenny, all your mirth and woe; Have seen your lifted silken skirt, Advertise dainties through the dirt.'  The beautiful red of her hair contrasts with the dark sky, and the white foam of the sea acts as a counterpoint to the idea of Jenny displaying herself in the dirty streets of the city. 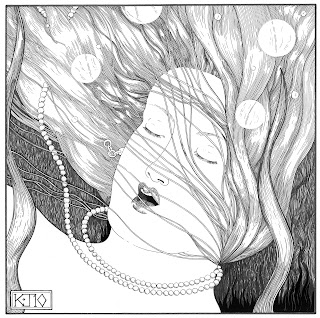 What I love about Karen's work around Fanny is how she shows Fanny resisting the stereotypes, how the detritus of Fanny's persona are so loosely attached that the sea and wind can strip them from her.  In the image of her on the pier, Fanny stands before the Margate Steam Packet poster, next to the word 'Venus'.  As she stands, weaving the beads through her fingers, aping her pose when she was Rossetti's only muse, she holds what might be a marigold flower (symbolising jealousy and grief).  She also holds what looks remarkably like a flower designed by William Morris, possibly linking her jealousy with the triangle between Rossetti and William and Jane Morris.

I went to the exhibition at the Beecroft and had my breath taken from me as Karen's work was so very beautiful.  Her tribute to Fanny, her understanding of the person behind the myth of a muse made me quite emotional as I have spent so many years striving for people to see Fanny as more than the jolly tart, a foolish interlude between the two great loves of Rossetti's life.  What I find in Karen's work is a reflection of my own conviction that Fanny is a great goddess, a figure of power and beauty who is nobody's interlude.  For me, Fanny will always be the main event.

To see more of Karen's work, please visit her website and stare in delight and wonder.
Posted by Kirsty Stonell Walker at 21:05