Lowry's Love of a Stunner

You'd be right to say that I'm not really very excited by the current exhibition of L S Lowry's work, entitled 'Lowry and the Painting of Modern Life', showing in Manchester until October.  However, I am interested in Mr Lowry... 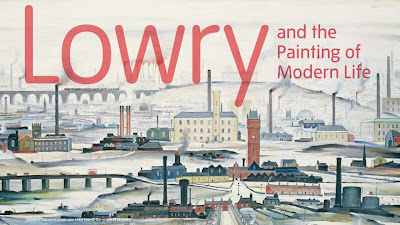 Despite my ambivalence to matchstick men and industrial landscapes, I have followed the press coverage of the exhibition with interest because of L S Lowry's dark and shameful secret.  He loved Pre-Raphaelite art. Shocking.  What's a nice modern artist like Lowry doing with a bluff old Victorian like Rossetti?

If you think about Lowry's age and where he came from, then his love of the Pre-Raphaelites is less amazing. Born in 1887, he grew up among the ideas of William Morris and Edward Burne-Jones, artists who were held in esteem at the evening art class he attended.  He visited the 1911 Pre-Raphaelite exhibition in Manchester and then another smaller one of just Rossetti and Ford Madox Brown's portraits in 1920, together with the Brown murals in the Town Hall.  He claimed, possibly apocryphally, that as a small boy he was taken to see Brown paint them (he would have been 5 years old at the time). That was it for him.  His love for Brown and Rossetti never wavered for the rest of his life.

Of course, Lowry's work was more than just those matchstick figures and factories and a look at some of his portraits shows a softer, more 'Victorian' sensibility to some of his work.  Lowry's desire to purchase his own Rossetti picture came after a stay in a house owned by a friend of the Agnew family (art dealers connected to the Pre-Raphaelites).  There he saw a drawing of Elizabeth Siddal.  Ironically, Lowry never really liked the pictures Rossetti did of his wife, preferring other, more fleshy goddesses...

Lowry bought his first Rossetti picture in 1953.  Although this was a possible study for Sibylla Palmifera, it isn't Alexa Wilding (who sat for the final picture) but Fanny Cornforth.  Lowry wasn't keen on her 'goitrous neck' but felt the drawing had 'a lot of vitality' and hung her for a while in his bedroom.  It was after I read that I began to really like Lowry...

Lowry followed up his initial Rossetti purchase with two more, two years later.  He purchased The Laurel, a portrait of Agnes Manetti or Ada Vernon from the mid 1860s.  He purchased it as Portrait of a Lady Seated Holding a Flower and apparently he liked the hands but felt the mouth was rather hard.  The rather more enigmatic Portrait of a Lady was a less successful picture, and reminded him of Fuseli (he didn't like Fuseli).  He ended up hiding it under his bed as he did not like it enough to see it on a regular basis.  I would argue that it was again Fanny, but it isn't a very good image of her, the eyes are uneven and she is doing something undignified with her right hand.  Possibly best she went under the bed.

Lowry's possession of Rossetti ladies gained momentum in the 1960s as he was establishing himself as a successful artist.  He purchased this image of Alexa Wilding in 1960...

I hadn't noticed that her pose is a reverse of Reverie.  Lowry hung this image downstairs in his house, on more 'public' show, over his sideboard.  It certainly paved the way for one of the most important purchases of his collection...

My apologies if the version of Proserpine isn't the right version, it's a nightmare trying to sort one from another.  Lowry bought this oil in November 1964 and he considered it one of Rossetti finest painting, second only to Astarte Syriaca which he had admired in Manchester (as have I, it's stunning).  He hung her on the stairs, but then moved her, propping her against his wardrobe because he didn't like passing her, possibly feeling it to be unlucky.  Interesting note: the copy of Proserpine currently up for auction was bought by a friend of Lowry's after they admired the artist's copy.

Not everything he purchased was displayed.  Morning Music and the Head of a Girl were bought but hung briefly, if at all.  They, like others, ended up under his bed.  One of the problems may have been that Lowry often didn't go to the sales himself but had an agent bidding for him.  I wonder how much he felt conflicted about his love of such unfashionable art.  Head of a Girl is rather lovely, I would guess a possible image of Alexa, but he didn't let her see the light for long.

The figure of Delia is identified as Fanny Cornforth, rather than Lizzie Siddal (who famously posed for the sketch, arguably used for Beata Beatrix) and it is obviously a different figure, chomping on her hair while her husband charges on in.  Lowry liked the figure of the old woman, stretching between different instruments, attempting to become a one-woman band.  Whatever she's playing doesn't seem to be disturbing the cat...

One of his favourite pictures which always hung downstairs was this sketch of Annie Miller.  He hung her opposite his armchair so he would see her often.  It was the 'uninhibited passion' of Rossetti that attracted him and he felt this was most vividly displayed in his pictures of women.  The way he described them seems very odd, if you take into account how much he liked them: 'They're very queer creatures and I like him for it...What he puts into the individual is all him, not the individual, they're probably very ordinary people'.  In 1961 he said 'I don't like his women at all, but they fascinate me, like a snake.  That's why I always buy Rossetti whenever I can.  His women are really rather horrible'.

I would say that Lowry's overwhelming love affair was split between two women.  The focus of his collecting includes images of Alexa, while he admired the oils that included her that he saw in Manchester (possibly from the collection of Frederic Leyland, Alexa's biggest fan) and she definitely fits the bill of his 'horrible woman' in the subjects she portrayed.  She was Rossetti's cool, detached goddess, an evil that would ignore you as your punishment, more concerned with her own perfection.  The same could not be said of Lowry's other favourite...


For Lowry, Jane Morris seems to be the perfect Stunner.  Despite his admitted 'revulsion' at the images, he had a fondness for her as he experienced her through the more 'portrait' aspects of Rossetti's art.  He hung this sketch in his bedroom with his Burne-Jones sketch of a woman, and always felt that there was more emotion in Jane's face than in Burne-Jones' model.

I always had a weakness for Rossetti chalks and it appears I'm in good company.  Lowry bought both of these from The Stone Gallery in Newcastle upon Tyne and remained fond of them until the end of his life.  Both hung in his bedroom and he found them alluring and fascinating.  Considering Lowry's very complex relationship to Rossetti's work it seems unsurprising that he would be drawn to the artist's most 'complex' muse, a punishing, reflective, sorrowful goddess, who needs you but you are unable to reach.

Lowry said that although he admired the work of Ford Madox Brown above all artists, definitely above Rossetti, he liked Rossetti on a personal level and felt a connection to the man and his art.  It is impossible to see a direct link between Lowry's images of the industrial landscape of the North West of England and a painting such as Proserpine but then I read and enjoy many books that I would have no intention of writing myself.  Maybe Lowry felt that Rossetti alone could make those images, that there was a special interplay between muse and artist that would be pointless to reproduce, so he had no interest in painting in either the style or the subject.  In the end, Lowry claimed that Rossetti was the only artist whose work he really wanted to own (despite his collection of many other works).  Maybe that seeming conflict between Lowry's work and Rossetti's was one of the allures that drew him to collect.