Review: Portrait of a Muse

As the nights grow longer, I always like having a whopper of a book to read. Better still, I received a chunky biography of Frances Graham, daughter of Pre-Raphaelite patron William Graham and model for Edward Burne-Jones. Hers was a name that was familiar, so I was eager to learn more... 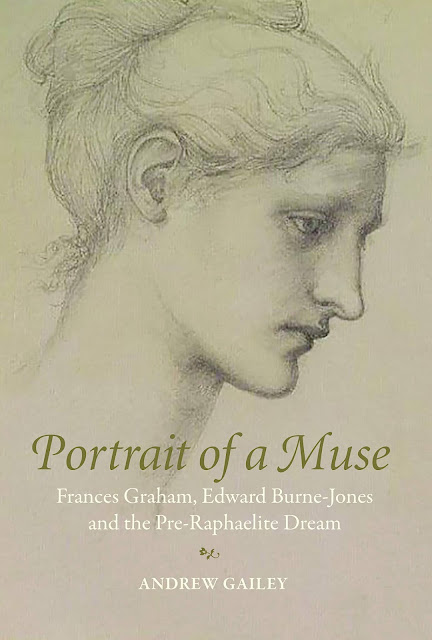 Frances Graham, later Lady Horner, seems to have lived a pretty full life.  Not only that, she wrote her own autobiography.  As someone who routinely writes about women of this era, I can't imagine the utter luxury of writing about someone who recorded their own version of events! The best I've ever got was Julia Margaret Cameron's extreme brief Annals.  Mind you, the fact that Frances wrote and published her own memories as Time Remembered (1933) should tell you the level of privilege you are looking at.  This is the story of a woman of comparative wealth and position, not to mention a fair amount of influence.  From her early years as her father's right-hand girl in the art world, to her life as a free-spirited wife and later a mother and grandmother, this is quite a story.  Not only that, it tells the story of how Pre-Raphaelite art travelled from the 19th to the 20th century in taste and some of the many reasons it fell from grace, an aspect which I found fascinating.

The beginning of this book is very much concerned with Edward Burne-Jones' relationship with Frances and it is not comfortable reading. 'You haunt me everywhere ... I haven't a corner of my life or my thoughts where you are not,' he wrote to her, and Andrew Gailey, author of this biography, declares Burne-Jones the love of her life.  Despite the technicality that the age of consent was much lower during Frances' teenage years (thereby excusing Burne-Jones of any hint of paedophilia) and Burne-Jones other dalliances, I still found his attention and her attitude towards him more troublesome than I expected.  Small things, like finding visits to Burne-Jones' home much 'nicer' when Georgie was not home, and her peers (and no doubt his) knowing that Frances Graham had 'Burne-Jones at her feet', does give one pause.

'Physical congress with one's muse is hardly possible, because her role is to penetrate the mind rather than to have her body penetrated.  Dante never laid a hand on Beatrice, nor Petrarch on Laura. Gustav Klimt's "life-long companion," Emilie Floge, the younger sister of his sister-in-law, almost certainly died a virgin.' (note 89, p.388)

Deary me, I want to unpack that, not least because actually in the text, Gailey shows many examples of artists and muses that get very physical indeed.  I suppose the tension is that how much of a claim do we believe if the artist and muse never have sex, which is terribly basic and also impossible to prove either way.  I'm completely fine with an artist and his model never seeing each other naked - no-one can fail to see that Rossetti was inspired by Alexa Wilding - but it is hard to argue that Burne-Jones was all consumed by Frances, beyond all others, without any hint of anything else.  Also, that claim is very problematic for other reasons because you are referring to something that is a one-way street, and often something that says more about the artist than the muse. There has been some very interesting discussions surrounding 'muse-hood' in the wake of things like the 'Pre-Raphaelite Sisters' exhibition.  How much can we claim that inspiration is a two-way street, and can it ever be influenced or controlled by the subject of the obsession?  Also, with Frances and Burne-Jones, we are talking about a very young woman (if we are not comfortable using the word 'child').  Burne-Jones's attitude to Frances and her recorded response is a very salutary lesson in grooming, for want of a better word.  The attention the older artist lavishes on the girl is inappropriate, but I would not say that she is the only beneficiary of this attention.  That's a very busy Golden Staircase, after all.

The Golden Stairs is possibly the most famous of Burne-Jones's paintings of his daughter's friends, and Frances Graham is there at the bottom of the stairs with the cymbals.  The painting is often seen as melancholic, with the girls descending from their pinnacle of wonderfulness (and youth) before going out into the big wide world and marriage. Frances was one of those girls who marriages that Burne-Jones bewailed, along with his own daughter and others of her friends.  The narrative then moves Frances into the privileged group of the Souls (who you might know from this post).  Her freedom within this group is both enviable and surprising - despite phrases like 'incarceration that is motherhood' (okay then) and her marriage to John 'Jack' Horner, Frances seems to have spent a large amount of time away from her family, some of it on a boat with another chap.  Marvellous.

Actually, I found the passages about Frances' attitude towards her daughters Katherine and Cecily even more bothersome than the Burne-Jones business, although he does crop up again.  There is an interesting claim at the beginning of Chapter 28 - 'Frances proved a more enthusiastic mother than many of her generation.' Now, I don't know if that is a shocking indictment of the horrible upbringing of children born in the 1880s and 90s, or a rather rose-tinted view of how Frances got on, I'm not sure but I didn't see any great triumphs of parenthood.  However, Frances' attitude towards her daughters is difficult to read.  Her praise of the pretty one, Cecily, as opposed to Katherine, the clever one, is trouble waiting to happen.  Again, Frances gives us a narrative of this, so it is difficult to feel this is purely authorial judgement.  Indeed, Gailey seems to want to excuse her of some of the more cringe-worthy comments and behaviour.  It is possible that she is no worse than her contemporaries but heavens, you can see the issues of the children signposted loudly through the attitude of the parents.  Also, a reappearance of Burne-Jones left me speechless - on hearing that John Singer Sargent had painted Cecily, he raged, stating Cecily 'is mine - who was made to fulfil a dream of mine and who is my vindication.' Lordy.

As Frances grows older she doesn't seem to develop insight or any sense of irony.  At the perceived loss of her looks to age, she bemoaned how 'men both married and single, no longer quite young, delight in the society of girls.' Now, come on Frances, wasn't that exactly what you benefited from as a youth? Personally, I loved the chapters where Frances is annoyed by the younger generation, including her own children.  An aspect that struck me was, as she grew older, how Frances' behaviour contrasted with Georgie Burne-Jones - when it came to the Boer War, Georgie's loudly anti-war attitude won her no friends, however Frances is portrayed as a 'political muse', getting involved and raising money for the war.  More tragic yet is the First World War and the devastation delivered to her children's generation.  I found that I was reading about a woman overtaken by events, age and an era that vanished, but possibly that is the fate of all of us as we age.

I have to admit that, to my surprise, I did not like Frances Graham after reading this book.  That is possibly not a concern for you, dear readers, and not at all necessary, but I found it a bit of a novelty to actively dislike the subject of a book quite so much.  The margins of the book are littered with notes such as 'For goodness sake' and 'Really??!!' at some of Frances' comments and remembrances.  That said I think it is to the utter credit of the author that I continued reading and enjoying the story.  This is a hefty romp of a book through fascinating country, filled with the most interesting people.  It is traditionally written and obviously meticulously researched to the point that you feel you are being told it by the people involved rather than through a third party.  Oddly, I was reminded rather of young people today who are horrifically embarrassed by what they have written on social media five years beforehand, in that because all the people in this book are 'important' all things they ever said or wrote was remembered and recorded, both good and utterly appalling.  There is no escaping embarrassing and cringe-worthy comments.  Also, someone should have had a definite word with Burne-Jones, that's for sure.  He does not come out of this well.

If you need a good read this autumn, this is a must.  It's satisfyingly weighty, engagingly written and beautifully illustrated, so gives you a lovely reason to stay safely at home. Portrait of a Muse: Frances Graham, Edward Burne-Jones and the Pre-Raphaelite Dream by Andrew Gailey is published by Wilmington Square Books and available from all good booksellers in November.