Pre-Raphaelite Women (with an emphasis on the 'men')

That sound, my gentle readers, is the repeated bang of my head against the desk.  I should have seen it coming, yet I was still rather surprised when, at the end of a marvellous talk on Pre-Raphaelite women recently (given by someone else, hence the 'marvellous') the first question was 'why do they all look like men?' Sigh.

When the National Portrait Gallery launched the publicity for their new exhibition Pre-Raphaelite Sisters, the first comment on social media was, and I quote...

Gosh, how original, thought I, but after a quite extensive period of eye rolling I felt I should put some thought into an answer of why people keep saying this.  So, do they all look like blokes?

Let's start with this...

I never get tired of seeing this image and the face in Ophelia may well be my favourite of all Pre-Raphaelite women, which is a bold claim, but as 'portraits that aren't actually portraits' go, it's photographic and astonishing.  I can't say that I get a strong masculine vibe from this.  How about this one...?

I've heard grown men come over all unnecessary while talking about this striking portrait and George Saucy-Pants Boyce had it next to Bocca Baciata, so we can guess his thoughts about it.  It's a strong portrait but it would be stretching it to argue it's a masculine portrait.

The lovely Ellen Terry washing her hands is not at all bloke-y.  It's absolute perfection in its delicacy. So let's cut the chase.  It's Jane Morris, isn't it? 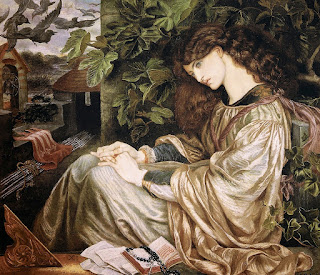 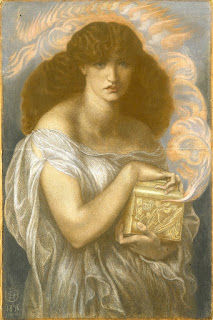 It massively is, I can tell.  With her broad shoulders, defined jaw line and obvious physical presence, it is usually Jane, as portrayed by Rossetti, that comes in for the flack.  It would be easy to say 'well, that is just how Rossetti chose to show her...' but actually, she did pretty much resemble his images of her.


Coming in a close second, it's Holman Hunt's over-paints of Annie Miller with his wife Fanny/Edith (they both look very much alike) that get a bit of abuse but again, the Waugh girls did look a bit like their painted selves...


Before we start unpacking all that, I might just add that of course, conversely, Edward Burne-Jones gets criticised for making his male figures too feminine, as Willie Bridgman MP complained (read about it in this post) and Pre-Raphaelitism is not short of 'man-damsels' flopping about looking sexy...

While we're on the subject, from the outset Pre-Raphaelite art was definitely up for a bit of cross-dressing, but with girls dressed as boys, as in...


But you know, it's Shakespeare, it's all good.

So, if the painted images of the women look like them (as much as any picture that isn't a portrait is going to, see also this post) then what people are actually objecting to is that women who look like that feature in pictures and here we are into much murkier territory.  Who exactly gets to say what a woman looks like?  Why can't a woman have a strong jaw, big eyebrows, be tall, have broad shoulders?  If a woman has those things, who are you to say that she isn't a woman, and a damn fine looking woman at that?

It boils down to the commentator firstly finding that an image does not fit in their narrow category of 'woman' and secondly objecting to that woman being glorified in art.  This is partly an exclamation of 'I don't fancy you therefore you don't deserve a picture'. I have occasionally thought 'Good heavens, I would extremely saucy things to you' while looking at certain paintings, but have never thought the opposite.  I mean really, whether or not someone was a suitable subject for a painting 150 years ago is somewhat of a moot point.  Rossetti doesn't care if you fancy Jane Morris; He fancied Jane Morris, so you can shut your face. Also, he's dead, so he really doesn't care.

Also, what are people looking for in a female image? Someone who is one cough away from an open grave?  Gosh, that woman in Fading Away is so hot, she looks like a proper woman and everything with her deathly pallor and prominent bones.

Look at the walking stick on this girl! I like my women to not be able to escape quickly. That's a proper woman.

Look, if you are in the business of telling women what they can and can't look like then Pre-Raphaelite art is not for you.  The Pre-Raphaelite artists purposefully set out to paint women they found attractive, not really giving a jot for what society thought.  They treasured red-hair as the rest of society found it unlucky, they sought out women in their circle to play the Virgin Mary, suffering all manner of abuse for it.  Holman Hunt went off to the Holy Land to find Jewish models to play the Holy family and was not thanked for it.  Women in Pre-Raphaelite art are, for the most part, strong, healthy, lusty looking lasses and through their challenge to the prevailing aesthetic that narrow little band of what is acceptable for womankind widened a few inches.

No-one gets to say a damn word about the appearance of a woman, especially, and I cannot emphasize this enough, if that word is a negative matter of opinion.  The moment we start saying what a woman looks like, everything is dangerous ground.  If a person is a woman, then that is what a woman looks like.  If a woman looks strong, thoughtful, drought and famine resistant then that is what a woman looks like, as is every variation therein. I get very nervous when women are required to look thin, sickly and passive as that does not speak well of the men in our society. That is not to say that thin, sickly women are not what women look like either, because some women are that and therefore it is still what women look like and that still isn't a man.

Proscribing what a woman should look like tends to be part and parcel in with what should come out of her mouth or what should go through her mind. A society that sneers at any woman who does not look like the narrow ideal should worry us all - if you let a damaging opinion go by just because it doesn't affect you personally then tomorrow it might be you that gets sneered at, which by the way means that nothing you think/do/feel is valid or listened to. We are better than this, and if we really aren't then we should aspire to be or learn to think before decreeing what a gender is or is not.

So when you hear 'but they all look like men!' please answer and inform, not just for those women but for all women.
Posted by Kirsty Stonell Walker at 14:34 1 comment:

National Poetry Day 2019: On a Portrait

Happy National Poetry Day to you all.  I am in the midst of book-writing and so I bring you a poem by Julia Margaret Cameron on the beauty of a portrait...

On a Portrait
September 1875

Oh, mystery of Beauty! Who can tell
Thy mighty influence? Who can best descry
How secret, swift, and subtle is the spell
Wherein the music of thy voice doth lie?

Here we have eyes so full of fervent love,
That but for lids behind which sorrow’s touch
Doth press and linger, one could almost prove
That Earth had loved her favourite over much.

A mouth where silence seems to gather strength
From lips so gently closed, that almost say,
“Ask not my story, lest you hear at length
Of sorrows where sweet hope has lost its way.”

And yet the head is borne so proudly high,
The soft round cheek so splendidly in its bloom,
True courage rises thro’ the brilliant eye,
And great resolve comes flashing thro’ the gloom.

Oh, noble painter! More than genius goes
To search the key-note of those melodies,
To find the depths of all those tragic woes,
Tune thy song right and paint rare harmonies.

Genius and love have each fulfilled their part,
And both unite with force and equal grace,
Whilst all that we love best in classic art
Is stamped for ever on the immortal face.

Posted by Kirsty Stonell Walker at 14:00 No comments: