I love painting that are so resplendent in detail that new narratives sneak out and get you when you least expect it.  Even the most familiar picture can be re-read in a different way if you think about a detail in a new light.  And it's fun!

One of the most famous Pre-Raphaelite pictures, certainly the most famous done by William Holman Hunt, this will be a very familiar painting to you.  Conceived to hang together with The Light of the World, it is the moral and spiritual awakening of a woman whose morals are in dire need of a good awakening.  She rises from the lap of her seducer when she hears Jesus at the door and is saved (or not, depending on how you read the repainting of her expression).  The room in which she stands is overflowing with meaning, from the discarded glove (oh dear), the cat toying with the bird (oh deary me) to the unraveling wool (lawks, that's not ending well) all spelling doom for the woman if she doesn't see the error of her ways and embrace Mr Jesus and the way of the open window.  All that is hammered home by the imagery of the frame, marigolds and bells representing sorrow and warning... 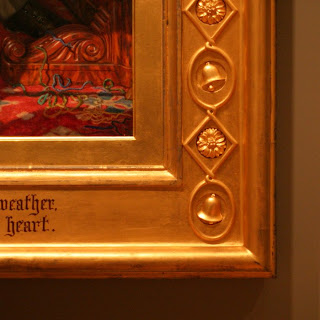 Oh she is doomed!  She is saved!  She is doomed and saved (Soomed? Daved?) But what of the man?
In all of the interpretation, the man is rarely mentioned beyond his role in the downfall of our petticoated prossie here.  The reason I started thinking about him is because of this...

On the piano is a piece of music entitled 'Oft in the Stilly Night', from the 'knuckle-biting' section of the music shop.  It is a poem by Thomas Moore set to music and appropriately speaks of regrets.  The traditional reading of the picture is that the woman is so touched by the words that she has an epiphany that her life is ruining her.  Here are some lyrics: Oft, in the stilly night,Ere slumber's chain has bound me,Fond memory brings the light,Of other days around me'.So far so good, the poem says that at night the poet remembers happier, simpler times.  Like the woman in John Roddam Spencer Stanhope's twin works Thoughts of the Past and Robins of Modern Times, the woman is thinking back to her childhood before/when it all went horribly wrong...


Well, Oft in the Stilly Night reminds the awakened woman of her care-free childhood, and her predicament and loss is brought home to her.  Or is it?  Look at the next lines of the song...

The smiles, the tears,
Of boyhood's years,
The words of love then spoken;
The eyes that shone, Now dimm'd and gone,
The cheerful hearts now broken!

The song is about a man who remembers his past at night, his happy past that draws attention to how miserable his current state is.  What if the person we should be looking at is the man, not the woman?

Should we consider his feelings in all this?  He appears to be the archetypal cad, just short of a moustache-twist to make him complete.  He is literally keeping her down (in his lap) but she has literally broken free of him and seen the light.  Literally.  A lot of this is literal, which is odd for such a symbolic image.  If the music applies to him, what are we being told?

The second verse of the poem is less cosy and smiley than the first and brings home a slightly more disturbing feeling than the rose-tinted start.  The narrator speaks of remembering his friends who have all fallen 'like leaves in wintry weather', although it is arguably vague if they are dead or if they have just left him, fallen away from him.  I'm going to assume dead, it's more fun.   He continues that he has been feeling as if he is alone in a banqueting hall, 'Whose lights are fled,Whose garlands dead, And all but he departed!'  The imagery of a banqueting hall with garlands is quite lavish and bacchanalian,but it seems our chap has hung on too long, stayed there far beyond what is appropriate, what is good for him. He has become the last loser at the party which ended twenty years ago (rather like Simon Pegg's character in The World's End).

Maybe, just maybe the Conscience that needs awakening is our chap, sitting at his piano.  Bear with me.  He has his mistress, he has his shag-pad in St John's Wood, but isn't it time he actually started behaving responsibly and less soul-destroying?  He is about to be left by his semi-naked squeeze, he is playing on while his own personal Titanic sinks but it isn't an act of bravery, more one of oblivion or sheer bloody denial.  Is he suddenly aware that he is alone in his banqueting hall?  The term for sleep in the song is 'slumber's chain' which doesn't have a comforting ring if you ask me.  He is 'bound' by slumbers chain, unable to escape from all the rosy memories of the past, an odd juxtaposition of the good memories and the terrible claustrophobia of the night.  Even if the woman had a look of horror on her face, I think that the creature who is damned in the picture is the man, and he knows it.  And he'll be thinking about it at night.  Alone.

It may not be what the artist intended but I bet you won't look at the picture the same again.  All together now... 'Oft, in the stilly night, Ere slumber's chain has bound me...'
Posted by Kirsty Stonell Walker at 21:14