Time, Death and Many, Many Judgements

Hello again, and I hope you all had a very happy Christmas.  We are resting in the strange week between Christmas and New Year and I never know quite what to do with myself during this period as I find it a little disturbing.  I'm not sure why, but I've always found New Year a bit depressing, a bit panicking, so it's often an early night on 31st December before I become maudlin.  It's odd because I'm the sort of person who makes some fairly rational resolutions and sticks to them, but for some reason New Year makes me feel the passing of time very strongly and I don't like it one little bit.  It makes me feel a bit like this...

Oh, dear me, I've come over all allegorical, it must be the gin.  This a good George Frederick Watts image, all monumental and drape-y.  Time, a handsome young man, strides ever forward with his scythe, but his constant companion is Death, who has gathered flowers in her dress.  Behind them, Judgement in a flame orange gown holds up a golden scale.  It's an interesting twist that 'Father Time' is for once a very well-placed young gentleman, not old and bearded as we are more used to seeing in 'New Year' images, and he is striding forward, unstoppable.  It's a more dizzying prospect for us mortals to think that Time isn't stopping, he is young, fit and healthy and pays us no heed at all in his never-ending motion.  Death looks more care-filled, with her lap of posies, but she has gathered buds, blossoms and fading flowers to her, cut at random.  She does have the decency to look a bit sorry about the fact that she will harvest us, no matter our age, bud or bloom.

The figure of Judgement is interesting.  I'm used to seeing Judgement blindfolded, but this time her face is hidden by her arm, so she does not see us and we do not see her, just her scales, the ever-present judgement that will apply to each of us.  There is a definite feeling of forward motion as we stand before the image, as if at any point they will reach us and we will be harvested and then judged, Watts obviously feeling that our most important judgement happening after we are dead.

This point has a special resonance with me.  The beautiful Watts painting I show you above is not by Watts.  It's a copy by Cecil Edwin Schott.  Cecil Schott worked as a studio assistant for Watts in the 1870s, due to the recommendation of Rossetti who thought the young man showed promise as an artist.  Cecil was the eldest son of John Bernard Schott, Fanny Cornforth's second husband, and it was Fanny who introduced the aspiring young artist to Rossetti.  Cecil worked for Watts for many years, his skill developed in the studio until he emigrated to South Africa and dropped from the records, sadly.  The reason I chose this picture this morning is that the notion that judgement is waiting for you after death has been on my mind as I work on Stunner.  Imagine for a moment that in a hundred years time people you have never met will confidently say of you 'Oh, yes, I know for a fact that [insert your name here] was an illiterate, sluttish monster...'.  In a way it strikes me that Judgement sometimes isn't blind due to impartiality, but also out of ignorance.  People cast judgement upon others blindly because they do not care to look for the truth.

As we approach the new year, I hope we will spend 2012 searching for truth, beauty and a fair share of sniggery giggles together.  Happy New Year and as my Grandmother used to say 'May the moon vomit gold into your goblin sack!' 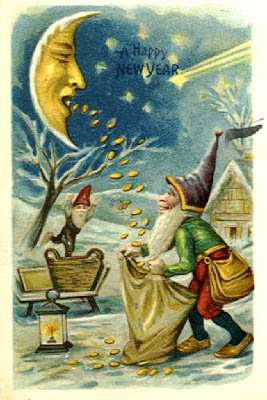