Today, I am melancholic.  Look at my sad face, it's pitiful.  The reason I'm all teary is that it is the 150th anniversary of Prince Albert's death.  The picture for today is therefore  The Four Seasons: Winter by Eloise Harriet Stannard. 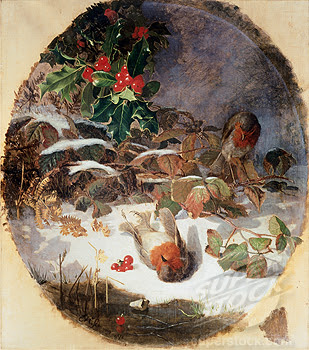 I'm not sure why I didn't know before, but I didn't realise that Prince Albert died this close to Christmas, the ultimate Victorian invention.  In fact, there were a good number of 'dead in the snow' pictures to chose from for today's post.  There seems to be a special genre for 'poor and dead in the snow' and I wonder if the added pathos of Christmas, 'the happiest time of year', brings an added dimension of misery to the images.  What could be a greater contrast to the archetypal jolly Christmas feast than a miserable dead robin.  It's enough to put you off your brandy butter...

Turning to our picture above, there is an irony in the dead robin in the snow, as you'd think Winter was the robin's best season.  The other robin dips its little robin-y head in grief, before no doubt shedding little robin-y tears.  Or maybe pinching the dead robin's berries.  What?  He's not going to need them....

Winter seems to throw up a party of fears for our Nineteenth Century cousins.  The Poor could easily be freezing to death, often with bundles of sticks on their backs.  The Old are exposing themselves to harsh weather to go to church.  Everyone is risking illness and potential death to step outside in the snow. Under such conditions who is in the mood to celebrate?  Blimey, who can risk it?  It could be argued that the Victorians partied hard because life was so fragile and if the husband of the Queen, arguably the most privileged man in the country could be just snuffed out, then a dual existence of celebration and fear becomes the norm.

Unlike Queen Victoria, I won't spend the rest of my life mourning Albert and avoiding the public, I'll be cheerier tomorrow.  In the meantime, be kind to robins and keep warm.

I'll see you tomorrow.
Posted by Kirsty Stonell Walker at 13:17