I ought to do some sort of countdown in order of preference now we're so close to the end of Blogvent.  Oh well, I think I'm down to some of my favourites, including this little treasure...

The complete title for this little picture is For Snow Comes Thick at Christmas Tide and We Can Neither Walk Nor Ride The Hawk and Hound at Home Must Bide.  Brief and to the point then.
Brewtnall was one of those artists whose work I knew but I didn't realise it was by him.  I especially knew his fairy-tale scenes like Sleeping Beauty... 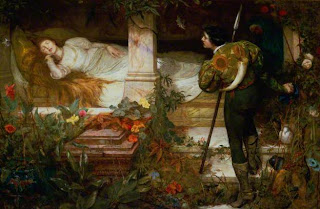 ...but thought it was possibly by someone like Arthur Hughes.  Looking at Brewtnall's work, it is very detailed and gorgeously toned. Looking at For Snow Comes Thick, our reclining gentleman looks at his hawk as both of them are housebound due to snow.  Why do you need to have your hawk in the house?  It's like that damn bird in Millais Isabella, sat on the dining room chair.  Now, call me fussy, but I'd be concerned for hygiene.  There is a reason why my chickens don't live in the house.
Anyhow, our bored chap is looking rather fine in his golden striped clothes and pale blue hose (so much more flattering than white) (unless they were white but he is now so cold he has gone blue).  There is a general feeling of opulence in the room, with the tapestry, the gorgeous plant pot and the discarded lute.  Despite living in such richness, our handsome gent is filled with sorrow due to the inclemency of the weather and his inability to kill stuff.  Oh woe, woe is me.
To start with, I couldn't work out where the hound was, but I believe he is hiding behind the plant pot, possibly keeping a low profile, or maybe he's eaten too many mince pies.  It's a very interesting image, compared with traditional images of winter inconvenience.  I'm more used to seeing pegged-out peasants in the snow, but here is a perverse yet honest picture, especially for modern times.  These days, you and I are less likely to snuff it in the snow with our bundle of sticks, but come the heavy snow, there may come a moment when you think 'I'm fed up of being inside...'  This picture isn't about the dramatic horror of Winter, it's about being trapped in the house with your equally bored hawk.  After being in the house with your relatives for a period of enforced jollity, which of us doesn't think 'Blimey, I think I need to go out and kill something...'
Mind you, the hawk is thinking 'Well, I'm nice and warm, I don't know what your moaning about, human...'

See you tomorrow.
Posted by Kirsty Stonell Walker at 09:50