I promise I’ll be better today.  I am abstaining from mince pies while I type this, so it should be coherent.  I will also try and be a little more pleasant and Christmas-y, no more temptresses with frosty nipples.  Today, I bring you The Mistletoe Bough by William Loudan. 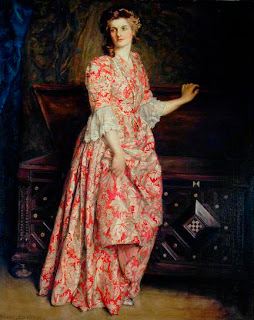 I need that dress please.  Anyway, this is an illustration for a very popular 1884 poem by Thomas Haynes Bayley, based on a ghost story that is connected to a number of stately homes in Britain (and no doubt elsewhere too).  The story goes that the lovely young lady decides that the best thing to do after her wedding breakfast is to have a game of hide-and-seek, and off she trots to secrete herself inside a giant chest.  Once inside, she finds she is unable to escape.  Years later, they open the chest and find a skeleton.  Happy Christmas!
My problems with this story are as follows:  Apparently they searched for weeks: ‘They sought her that night, they sought her next day,/ They sought her in vain when a week passed away. / In the highest, the lowest, the loneliest spot…’ However, not in the chest about the right size for a person to hide in.  The poem explains that it had ‘long laid hid’ in the attics, so that’s why they didn’t find her.  Hmmm.  It all sounds a little like a public information film from the 1970s.  Also, on my wedding day, it didn’t occur to me to play hide-and-seek, and I got married on HMS Warrior 1860, so it would have been an excellent place to play hide-and-seek.  Mind you, I wore a corset so tight that getting into a chest would have been damn near impossible, let alone getting out.  Maybe that’s what did for The Mistletoe Bough Bride; incapable of bending properly she remained trapped in the chest like a tipped sheep, unable to get up.

If you Google ‘The Mistletoe Bough’ there are a few paintings of the poem, but I must admit this is my favourite because of the lovely rich colours.  Her gorgeous dress is nicely off-set by the deep wood of her soon-to-be coffin, and the peacock-richness of the drapes beyond.  The detail on the chest is splendid, the way the light catches the carving and the little buttons and chess-boards of presumably ivory.

She is a very pretty girl, who is very pink of cheek.  Possibly this alludes to the fact that she asks her new husband to be the one who finds her first.  Now, you know I’m not one to point out smutty interpretations unnecessarily, but maybe what the poem is about is the dangers of lust.  There is holly also hung around castle, but the poem and its refrain concentrate on the mistletoe, which is commonly associated with kissing, and with youthly passions, possibly bordering on folly.  It could be argued that the poem is more than a ghost story, it’s a warning to young lovers that if you want to arrange some impromptu hanky-panky then it will more than likely result in suffocation and misery.

So remember, by all means kiss your beloved under the mistletoe, but if you want to play naughty hide-and-seek, take a mobile phone or whisper to your lover where you are hiding.  I would hate to lose any of you….
Posted by Kirsty Stonell Walker at 14:44