It's the shortest day which means that after today I'll be looking at seed catalogues and looking forward to longer, warmer days.  I'm not a huge fan of summer but there is something about the present darkness and the damp that makes me long for long summer days. Anyway, let's crack on with today's dog so we can all go back to bed and hibernate...

Dog on the table! He's a cheeky little chap, isn't he? This is Marco, Queen Victoria's little Pomeranian, pictured in the Queen's sitting room at Windsor Castle. This wonderful painting is part of the Royal Collection and you can see why it was beloved by the Queen. Victoria had bought little Marco in Florence in 1888, along with the beautiful Gina, possibly from the same litter... 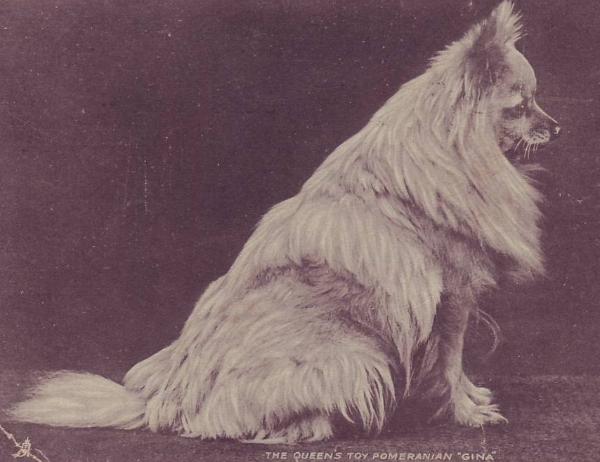 It was reported in the papers that Queen Victoria had fallen for little Pomeranians, which reminded her of dogs kept by Queen Charlotte, her grandmother.  Of all her Poms, she loved Marco the best and both Marco and Gina won many prizes in dog shows as well as starting a fashion for the little dogs. At one point Queen Vic owned 35 of the little fluff balls! When she died, one of her Poms, Turi, was by her bedside. There is a lovely article on Royal Poms here.

Obviously in Marco's five years of Royal life, he had not learned any table manners.  He is standing on a letter (let's hope it's not important) and there are violets and primroses on the table. As we have seen from a previous post, in the language of flowers, primroses mean 'I can't live without you', expressing exactly how much the Queen loved her animals and found comfort in their presence. The violets have the meaning of fidelity, which is a good dog quality, as they are faithful to a fault.  Violets were also Queen Vic's favourite flower, as explained by this lovely article, possibly emphasising how Marco was her favourite dog.

Barber was seen by his contemporaries as the equal of Landseer, who is better known today, probably because of The Monarch of the Glen and it's boozy associations. To Queen Victoria, he was a safe pair of hands who painted her animals for 25 years.  Her little herd of Pugs are both delightful but also interesting if you look at their appearance. Those Pugs have noses! I think it is Sally and Scamp at the back seen in profile and the brachycephalic (one of my favourite words) skull shape is definitely not as flat as it is now and it is only 150 years ago.

Standing on the breakfast table was not the only modelling gig that Marco had.  He also appeared with fellow royal pets Snowball and Janey, possibly modelled at Osborne House on the Isle of Wight. There are so many different dogs shown in the Royal Collections that you get a picture of a Queen who found solace in her furry friends.  Possibly that's why she wanted to have breakfast with Marco as he was at least quiet, didn't ask her difficult questions about being Queen. He just seems happy to stamp over the flowers and post while eyeing up your boiled eggs.  Who could ask more than that?

Posted by Kirsty Stonell Walker at 09:56