Sunday is meant to be the day of rest but I have a fridge to clean out and Lily wants to try out her new roller skates, so no rest for the wicked.  On with today's image...

That is a very beautiful dog.  I mean, the rest of the painting isn't too shabby either, but that is a glorious dog. Sure, those are some exquisitely executed baby feet, but that dog has fur you could sink your fingers into. 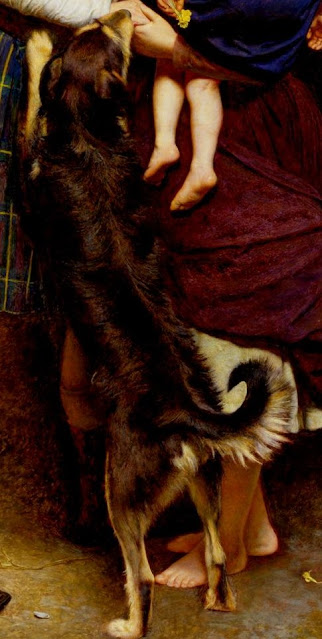 He is a silky chap with a sprightly tail. He obviously is there to represent loyalty and faithfulness and all that malarkey, but also as it is a collie, to represent the man's former life - a shepherd, a farmer, a husband and father - before he took off soldiering and getting himself locked up.  It is a balance between ideals and realities, of what you should risk for bigger pictures and what is sacrificed.  Interestingly, in this essay the tartans worn by the husband and the baby are identified as Gordon and Drummond, which raises some questions about the emotions and actions.  The husband wears the Gordon tartan, but for the Jacobite uprising in 1745, Clan Gordon  were split with Cosmo Gordon, the 3rd Duke, supporting the English, whereas his brother Lord Lewis Gordon raised two Jacobite regiments against them. Clan Drummond, whose tartan the baby is wrapped in and is suggested to be the wife's clan, were fully Jacobite, slaughtered at Culloden and paid dearly for their rebellion. The husband's clan was split, showing the conflict of interest, but he fought, risking his and his family's future.  The wife's clan had no such conflict and were punished, but she is at the prison, reassembling her family in the face of a battle, picking up peaces and keeping going. 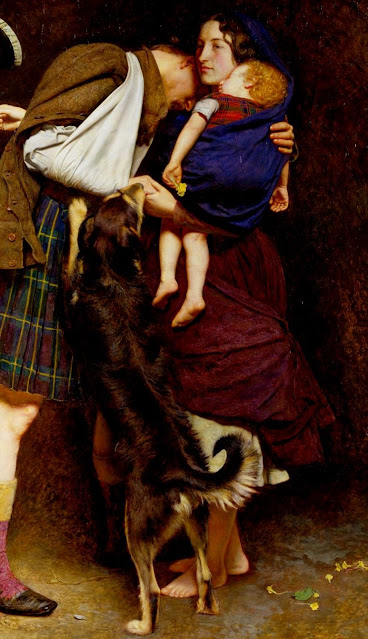 When I look at the painting, the wife's face is the only one I see in total and she is not only the focal point of the image but also the one doing all the work.  She is carrying a baby, handing over a get-out-of-jail-free card and grabbing her husband.   The dog, the baby and the wife all have no shoes, the men on the have shoes. I wonder if it is suggesting that whatever big picture conflict is being fought, life goes on for women as it has to - children need feeding, farms need running, husbands need getting out of jail, or else what is all the fighting for and what will he be coming home to?

You know I am a sucker for the meaning of flowers and falling form the baby's hand are primroses, suggesting it is Spring, and the husband is a prisoner from the April battle at Culloden. Primroses symbolise youth and love, which explains why the baby has them in his little hand, but also 'I can't live without you', the youthful impetuousness of love.  However, an awful lot of those flowers are on the floor.  Possibly, with those flowers behind her, that youthful idealism is behind the woman now, but she still is devoted and loyal to her husband, whom she is fetching. Love is greater than flowers, love is bare-foot prison breaks.

A few of the commentaries suggest that as Millais replaced a monetary ransom for the simple note in the picture, that the wife had paid her husband's way out of prison some other way, if you know what I mean. To me, that reflects the fact that people don't like the fact that the woman is sorting it out on her own.  I don't know what she has done in order to get that bit of paper, possibly just shown up with a screaming baby (it's how we got an estate agent to give us the keys to our new house in double quick time.  Lily has an impressive lung capacity), either way, that's not the point of the picture. The point for me is that life can be brutal and rubbish at time and the best you can do is keep going. If you are my loved ones, I will always come and get you from prison and Blossom is on hand to help get you out. 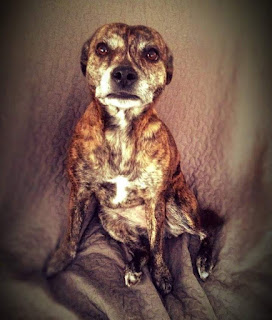 See? Who could resist that?

Posted by Kirsty Stonell Walker at 06:50