My heart is broken!  Okay, so I might be a little over dramatic but the plain fact is that George Price Boyce got married.  Sob! 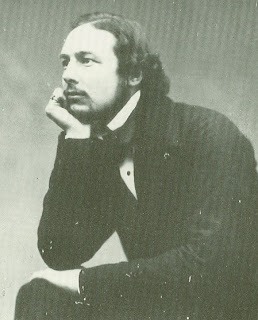 Oh George, how could you? Haven't I always been reasonably faithful to you? I suppose I ought to get over it as he married in 1875, but I only just found out.  I have been reading the very splendid biography Joanna, George and Henry by Sue Bradbury... 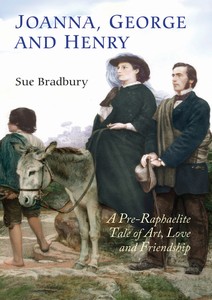 As you will know, I have done blog posts on both George Price Boyce (here) and his sister Joanna Wells (here).  The 'Henry' of the title is Joanna's husband and George's friend, fellow artist Henry Wells, and this is a book about their shared life and what became of three talented painters on the fringes of the Pre-Raphaelite circle.

The book starts with a rather harrowing account of exactly why there is not more of Joanna's work in public collections.  During the Baedeker raids, Bath took a bit of a pounding.  Afterwards, the artist John Piper was dispatched to record the devastation, and he painted the following painting of Somerset Place... 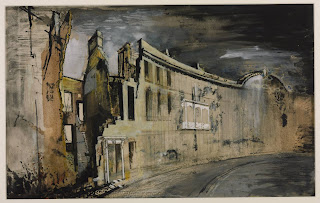 Do you see the house with no walls and roof left?  That was No.42, the home of Alice Street, 82 years old and daughter of Henry Wells and Joanna Boyce, and the house contained a vast collection of her parents work, together with early work by Burne-Jones, and a Madox Brown.  As her daughter Marakita fled the burning house, all she managed to grab was a drawing by Rossetti and four small paintings by Henry.  The rest was lost.  Joanna's legacy to the world of art, her chances to be rediscovered by feminist art historians in the same way as other Victorian lady painters would be in the 1960s was all but lost in that one night.

Reading the story of the brother and sister, it is really a story of contrasts.  As George moved easily into the world of the Pre-Raphaelites, Joanna was mostly forced to the boundaries.  She was gifted and full of conviction.  She recorded Turners death in her diary and attended the funeral with her father and brother, standing among the RAs and ARAs that would not allow her in to their club.  Joanna produced work of a high standard, but the society of the day never gave her as much time as her brother, as Ruskin said 'women were natural imitators but poor inventors'.  Thanks Ruskin.

Henry also moved with ease into the circles of fashionable artists.  He took classes with Rossetti and no doubt met George in the Pre-Raphaelite society that they both moved. It is very interesting reading about Joanna and George's widowed mother, who seems to have held great sway over her children's marriages and at first put up resistance to Joanna and Henry's engagement, as she did with her other children's attachments.  Makes you wonder if that is the reason for George's many and varied flings, with Fanny Cornforth, Ellen Smith, Alexa Wilding, Annie Miller and so on and so on.  George seems to have spent a goodly amount of his time 'desperately in love' with some girl or other but never stuck around to get serious.  Saucy devil.

It was his sister's marriage to his friend that signaled a divergence of the paths for the three.  George grew closer to his Pre-Raphaelite 'family' as his reputation as a landscape artist and a collector of art grew.  In Joanna's letters there is an attempt to get her brother to visit, to be close again with the couple like he had been before, but George was as slippery as an eel, preferring his freedom in the society of his fellow artists (and their models, if you know what I mean).  There is a very interesting notion put forward in the book that Rossetti acquired Boyce's landscapes to use in his own work, as he detested working outside and so turned to Boyce's art for the scenery he required for his own.

The family was reunited by the death of Joanna and George's younger brother Robert in 1859, and it was not a moment too soon.  George was exuberant at the birth of his sister's first child, Sidney, the same year, followed in 1860 by Alice (who would be the 80 year old lady in Bath), but in 1861, after the birth of another daughter, she became seriously ill and died, almost exactly two years after her brother.  Rossetti was summoned by his friends, the brother and husband of Joanna to record her on her deathbed.  In death, finally, Joanna became valued by her contemporaries who flocked to her studio and declared her work brilliant.

It is interesting that after Joanna's death, the focus of the men in her life seems to shake and their fortunes, while good, are damaged for the lack of her.  Henry found success as a portrait painter, although his life was again shattered in 1869 by the death of his only son, Sidney, to scarlet fever.  He continued to work, certain in the knowledge that one day his wife would be honoured as the great artist she was.

George finally fell, almost accidentally, into marriage with Caroline Soubeiran, and his diary ended.  His friendship with Rossetti petered out, due to Rossetti's illness and, much to Boyce's regret, the two never saw each other again after 1877, although he travelled to the grave in Birchington to pay his respects to his friend.

I think the most touching story in the book is the final hours of Henry's life, as told by his daughter Alice...

'He had lain for many hours half-conscious...when his eyes opened - a look of joy overspread his face, and with a whispered 'Joney', he tried to raise himself in bed.  As the nurse propped him up with pillows he slowly raised his right hand as though holding his paint brush.  With a look of wonderful happiness he went through the action of painting in the air...'

He continued his air-painting of his beloved wife until his strength finally gave way and he died, his painting complete.

What this touching and fascinating book offers is a chance to see a family on the edge of a scene we are familiar with, and their story is both odd and typical, with love lost, family together and apart, and a powerful love of art that compelled three extraordinary lives.  I was left feeling that for one reason or another none of them truly found the recognition they deserved, and sadly, especially for Joanna, that may never be so.


I can thoroughly recommend this book, if only for the chance to see many of Joanna's paintings illustrated from photographs mercifully taken before the 1940s.  If we are to honour Joanna Boyce Wells in the manner her husband always dreamed of, we have to start somewhere, and this is a compelling account of a talent woman.

I'm off to sob into my pillow for a bit because George Price Boyce jilted me.  I know, I'm not the first...
Posted by Kirsty Stonell Walker at 16:52