I've eaten a fair few mince pies over the last few days, mainly because I've been making them.  They are somewhat delicious and make me feel all Christmas-y, and slightly intoxicated, mainly because of the heroic amounts of brandy that I put in my mincemeat.  Oh yes, I lovingly hand-craft my own mincemeat too.  Well, I slap it all together with booze and suet, if that counts as the same thing.  Anyhow, if Christmas had a flavour, it may well be brandy flavoured...

Yeend King brings us an image of a politely boozey Christmas - some musicians have been offered a glass of something warming from a comely maid from a nice house, for which they look grateful.  Everything looks a bit frosty and cold, emphasised by the scarves worn by the musicians, and nicely shown by the pale watercolours used by the artist.  I promise one of my mince pies could keep you warm for a goodly long time...

Yeend King is one of those artists who is famous and yet the name does not spring readily to mind.  He was better known in Victorian times, due to his choice of genre subjects and scenes of rather nice everyday life. 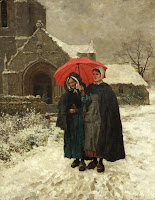 Lovely, everyone loves a woman in a headscarf.  Anyhow, last blogvent, I featured another one of Yeend King's pictures, Three Score Years and Ten, showing snowy wonder and a nice red brolly.  Despite the subtle grimness of the image, it does look rather cold, it is still very lovely, with the glorious red umbrella catching your eye and comforting you with the impression that the old lady will get home, warm and safe under the care of her granddaughter, daughter, or random female relative.  Similarly the use of the golden glimmer of the violin and the booze nicely springs out at you as you view Christmas Cheer.  I love the powdery blue of the man on the right's coat and the pink of the maid's dress, all muted and winter-y.  In one piece I found about him, it described his work as bucolic, which I had to look up.  But, yes, his work is very bucolic (relating to pleasant aspects of countryside life), but I don't think he shows a fantasy, he just concentrates on the more pleasing aspects.  A bit like a BBC Sunday evening serial.

Anyhow, the notion of being presented with a glass of something pleasant, rather than the paint-stripper that musicians usually neck, is delightful and full of good will to all men, even men who fiddle in the street.

Now I know I've had too many mince pies, as that last bit made me giggle.  I best go and lie down.  See you tomorrow....
Posted by Kirsty Stonell Walker at 16:41