I have woken up this morning and found I have the lergy.  Alas,I am mildly unwell!  I have a slight cold and may well be a little bit ill!  I am wrapped in a blanket, watching rubbish telly and typing, feeling a bit sorry for myself, but I'm sure it will pass, probably by this afternoon.  Anyway, on with blogvent, we're down to the last week!

When I saved this picture to my computer, I thought it looked like a straightforward, pretty picture of a Victorian Christmas family.  It was one of Sadler's most popular pictures, sold as an engraving under two titles: Christmas Carols or Home Sweet Home.  It is definitely pushing the domestic bliss of a decent family, three generations enjoying the simple pleasures of singing at Christmas.

But is there more going on, or have I taken too much Night Nurse...?  Let's have a look at the different elements.  Well, to start with it has a rather odd composition, with no centre, the figures dispersed across the scene.  Grandma and Grandpa sit in the armchairs, while Mum and Dad are at the piano and their munchkins are singing their little hearts out.  So far, so typical and normal, but then who's this? 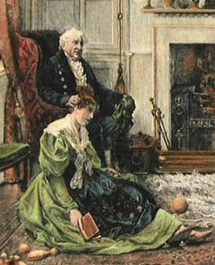 Sat at Grandpa's feet is another woman, about the same age as the Mother of the children.  At first glance I thought she was an older child, but she is of an age with the woman at the piano, so I'm guessing she is the other child of Grandpa and Grandma.  She is auntie to the singing cherubs, how lovely.  Or is it?

While Mum and Dad are at the piano, the children sing, entertaining the elder members of the family.  It seems to be the role of the the younger members of the family to entertain the older ones.  This is before telly was invented and so this is obviously a precursor to post-Christmas dinner Top of the Pops, watched religiously by my brother and I on Christmas Day in the 70s and 80s.  Anyway, they are contributing to the festivity, they are part of the celebrations.  So what is Auntie doing?  She is reading a book.  Oh, dangerous stuff. I feel a bit uncomfortable about the hand on the head of Auntie, as if she was still a child.  Talking of children....

Little Moppet holds her dolly behind her back as she sings, in a wholly natural manner, but if you look at the doll, it rather resembles the Aunt and faces her across the room.  If we go with the notion that Auntie is the unmarried daughter, sister to either Mum or Dad at the piano, her role in the family seems to be brought into question.  What is she contributing to Christmas?  What is she contributing to the family as a whole?  From her position on the floor (she doesn't get a chair) she looks rather beaten and retreating, escaping into her book as if to protect herself.  In the Victorian parlour, what use is an unmarried adult daughter?  Sorry, an unmarried adult daughter who reads?  Good Lord!  No wonder they don't let her have a chair...

All around her on the floor is debris, things not wanted, things left over.  Music that isn't being used, wool that isn't being knitted, a game that is over:  all these things could indicate that Auntie is leftover, extra to the main event, but look at the skittles.  One skittle remains upright, one skittle is standing, refusing to be knocked over.

All the doors in the room are closed, the mirror reflects back nothing much, no way out, and Auntie has her back to the window, the only source of light.  Yet that one lone skittle, standing despite the onslaught gives me hope for Auntie.  She is at odds to the traditional bastions of Victorian domestic continuity, but there she is.  Maybe she hasn't done what the parents wanted her to do, maybe she is a bit different, but she exists and she is reading.  Spinsters didn't exactly get good press in Victorian England (Miss Havisham, anyone?) and the woman sat on the floor isn't exactly being given equal billing in the celebrations, the mistletoe way out of her reach, high up on the ceiling.  I hope Santa brings her a chair and a comfy pillow. And some more books.  And some earmuffs so she doesn't have to listen to the Moppet chorus while she is trying to read.  And I hope no-one asks her to play Old Maid.

Well, I think the Night Nurse is really kicking in now, so I'm off to have a little nap and I'll see you tomorrow...
Posted by Kirsty Stonell Walker at 12:00