I am enjoying the frosty weather, it suits me far more than the endless rain and miserable damp we've had over the last month or so.  It puts me in the mood for Christmas and even though the days are getting shorter, the quality of the light makes you feel it was worth getting out of bed.  I gather from the ever-reliable weather forecast it is set to get colder with the north wind battering England over the rest of this week, so who knows how much colder it is going to get?  I smell the approach of a little Ice Age, much like this....

We all know how much I love a man in big boots and big hair, and this image has that aplenty.  This charming painting shows one of the 'Frost Fairs', held on the frozen River Thames in London between the 15th and 19th centuries, during what is described as the 'Little Ice Age' when the winters were longer and more severe than they are now.  I wondered at the very specific date, and found that 1684 was a particularly harsh winter, with the worst recorded frost ever in England.  The Thames froze completely for two months, reaching a thickness of 11 staggering inches in London, which is why so many people seem quite relaxed to be pottering about on the ice.  They obviously were not subject to the public information films of the 1970s like I was, which leaves me in mortal dread of ice, corn silos and railway lines.  And flying a kite near a substation.  And drowning in slurry.  What a way to go.  Anyhow, the ice was so thick that they did ox-roasts on the ice and people came to watch as the ice did not melt!  Well, this was a time before telly and frankly watching ice not melt is better than a lot of what is on TV on a Saturday night. 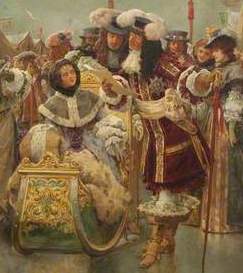 I love this image because it has a pale richness that speaks of frosted wonder and brilliant light.  I love the plumed feathers in the hats, echoing the frost, the snow and cold.  I really love the sleigh in all its gilt glory, and look at the size of her muff!  No wonder Mr Big Stick has stopped for her.  I'm a little intrigued by his boots, they are an exciting shape at the top, and I would imagine he could fit quite a bit inside them - possibly that is how he is keeping warm, he has some hottie bottles stuffed down them.  Nice and toasty.

Sadly the Frost Fairs are no more, due to the demolition of the old London Bridge which made the river flow stronger, I suppose stopping the freezing of the Thames to such an extent that you could not roast an animal safely on top of it.  A new bridge was opened in 1831 and the Fair was no more.  However, I am willing to invest in a gilded sleigh and muff combo in hopeful expectation that the Thames, or failing that the Kennet and Avon, or even the municipal paddling pool, will freeze sufficiently so I can sally forth with some style.  Big boots on, it's going to get chilly!

See you tomorrow.
Posted by Kirsty Stonell Walker at 18:24