It was almost a year ago that I talked to you about Annie Miller.  Annie is one of those character who I assume I know about.  You know Annie, she's the one who was a filthy tart, who slept around, who drove Holman Hunt to despair and then tried to blackmail him.  In comparison to Fanny, pages and pages have been written about Annie Miller.  She was there at the beginning of the brotherhood, defining how the brothers shaped their art, being the muse for Holman Hunt, then breaking his heart as she put her muse about a bit.  You know Annie, she's this one... 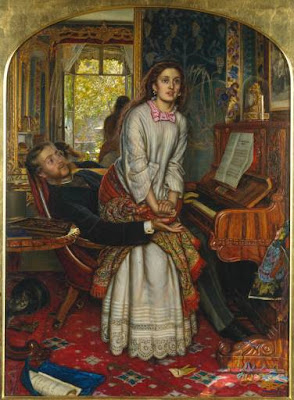 But wait, that's not Annie, as we discussed here.  I began to wonder about Annie, and if I knew her at all.  One thing I have learnt from my years with Fanny is that you should always question what you are told and who tells you.  There is a lot of repeating of stories in this business, there is a lot of taking people's word for it.  However, you and I both know that people lie, people tell big lies and little lies because what they don't want you to know is the truth.  So, what is the truth about Annie Miller?

Annie had a tough upbringing which is a matter of record.  Her mother died after Annie's birth, and her father left her and her sister Harriet with his brother George Miller and his wife Bess, who live behind a pub close to Hunt's rooms.  When Annie was old enough, she works in the pub, but was also looked after by Mrs Hill, a neighbour who is presumed to be a casual prostitute.  It was common knowledge that the Miller girls were lice-ridden, uneducated, feral and dirty.

Right away I use 'presumed' and 'common knowledge'.  We know neither of these things for sure, we have no photos, we have no trustworthy written testimony, all we have is hearsay and stories that are used to embellish William Holman Hunt's biography.  It's a wonder that Annie didn't crack nuts between her teeth.  What we do know is that Annie Miller was beautiful.  We can assume fairly safely that she didn't have access to education because of poverty, we can assume that she possibly wasn't the cleanest woman on earth, who was?  The only thing that is putting me off time travel is the smell, really I'm guessing they all smelt rank.  One thing we do know is that Annie was beautiful, because among the biographers who painted her as a slutty harpy it was suggested that she was the most beautiful woman in the world.  We can tell this from the portrait Hunt did of her, Il Dolce Far Niente...

Oh, hang on, that isn't her either.  Now that's something we definitely know about her, it's in all his biographies.  Hunt was so angry at the end of their relationship that he scraped her out of all of his pictures.  Really scraped her out, nothing left underneath.  If he was willing to scratch her face out of all of the images, she must have done something really, really bad.  Only he didn't, because this is her...

...although you could excuse this one as it was already out there and published, so he couldn't take it back.  She is also the face of his Lady of Shalott in the Moxon Tennyson.  So, we do have some Hunt images of Annie, but admittedly there are more by other people, mostly Rossetti.  Ah, Rossetti, I wondered when we'd come to you...

Things we know about Annie Miller #2: When Holman Hunt pottered off to the Holy Land, she slept around.  It was in Desperate Romantics, therefore it must be true.  It is the basis of her reputation as a nymphomaniac.  However, when you examine each time this little character assassination is cited, it boils down to this.  She was beautiful and men wanted to sleep with her, therefore she was sleeping around.  We transpose neatly from external desire to action by the person, which makes no sense.  It's like saying I make really good cake which a lot of people would like to eat, therefore I'm feeding everyone.  It makes no sense.  By the way, I make incredible cake, but I digress.

We know that Rossetti thoughts she was beautiful as he used her as a model incessantly while Hunt was away.  It apparently drove Elizabeth mad, but arguably it might not have been a purely sexual jealousy, it might have been something deeper, something that threatened her persona as Rossetti's muse, Rossetti's true artistic vision.

My God, I could go on and on, there are loads of Rossetti sketches, and they are beautiful.  She's all flowing hair and slightly gypsy-ish gorgeousness.  Images of Fanny from this time are quite similar, loose-haired, big-throated women, and they suit the vision that Rossetti was working at this time.  By the way, Hunt did not forbid Annie from sitting for Rossetti at this time.  He loved Rossetti, but left his name off the list of endorsed artists that Annie should sit for.  While this is a strong indication that Hunt was a little uncomfortable with leaving anything in the room with Rossetti (I wouldn't leave a plastic pot plant with the man), he didn't say a definite no.  He should of, as Rossetti is reported to have said 'Hunt stole my subject, so now I shall steal his model.' Well, that's what he is reported to have said, but then Hunt had used Lizzie as a model before, mainly due to Rossetti's persuasion, and Found stalled for many reasons, not least that the artist wasn't overly convinced of the message.  Anyway, it's generally acknowledged (based on nothing) that Rossetti slept with her, and not only him, but also George Boyce, who also used her as a model...

Now, there is slightly more reason to believe that Boyce had been romantically involved with Annie, due to the speed that he pointed the finger at Lord Ranelagh when Hunt confronted him.  We know that Ranelagh was involved with Annie in Hunt's absence because he merrily admitted it, the only person who did out of all the men we assume Annie slept with.  Possibly the only man Annie slept with?  Think of it this way - the man who pays your bills clears off to the Holy Land, with no promise that he would return alive (Thomas Seddon who went with him died out there), you are put through education which you are unused to, and all without any promise of matrimony.  Then a Lord makes you an offer of a little money and a little fun.  I don't blame her for taking a chance.  How often does a Lord fall in your lap?  I mean, literally?

While I'm here I'll also mention Millais.  No-one ever says 'Oh, that Millais, he painted Annie a few times, he must have been sleeping with her!'


I think Millais' depictions of Annie look like the remaining examples we have of Hunt's portraits of her, without the loose hair and presumed loose morals of Rossetti.  Is it just me, or does everyone who touches Rossetti come away a little tainted?  Anyway, I digress, again.

Hunt ditched Annie, after all his friends said what a wanton slutbag she was (even though Hunt was the subject of a story in Household Words in 1858 about how he had seduced Emma the country lass in The Hireling Shepherd) and she became too hot to handle, running up debts which she left him responsible for.  He planned to send her to Australia.  She sought the advice of Lord Ranelagh and met his cousin, Thomas Ranelagh Thomson, an officer in the Royal East Middlesex Milia.  Where Lord Ranelagh was there for fun, his cousin married Miss Miller, and that tends to be all we know about Annie Miller as she finally left Hunt's life forever.

Well, not quite all.  Hunt said that he ran into Annie later in life, and she was a buxom matron with a carriage full of children and he finally put the whole period of his life with Annie in the past, and moved on.

But this is me talking, well typing.  Do you really think I'm going to leave it at that, believing William Holman Hunt?  Not a chance.  I wanted to know what happened to Annie, so I did a little digging (there is a graveyard involved, so can I point out that I mean that metaphorically).

Annie and Thomas Thomson married on 23rd July 1863 at St Pancras Parish Church, and they lived in Hampstead, where little Annie Helen was born on 11 October 1866.  They moved to 75 Oxford Gardens in Kensington by the time of the 1881 census, where they employed a cook, a housemaid and a parlour maid.  By the end of the century, they were living on the south coast, settling in Shoreham by Sea.

Rather than the gaggle of children described by Hunt, Annie only had Annie jnr (although Diana Holman Hunt mentions a son, Thomas Jnr, but he doesn't seem to appear on any Census, so presumably he died as an infant), who remained unmarried and lived with her parents in Shoreham.  Thomas died in 1916 from chronic bronchitis, and Annie passed away 23rd February 1925, of the same illness as her husband, at the age of 90.  She had come a rather long way from a yard behind a pub, not on any Census due to how full of criminals it was.  She was remembered by her daughter as being lovely and ladylike, wearing exquisite handmade shoes and kid gloves.

The intrepid Miss Holman (no relation of Mr Hunt, well, maybe no relation, I'll let you know) and I found her grave in Shoreham, unmarked but in plot B.19.7, next to James and Isabelle Slaughter, who were helpful enough to have a stone...

I think the point I would like this post to have is that when we consume 'history', we should be aware that the writers had a reason, an agenda, a motivation to write it. Also, just because something is repeated it doesn't make it true. Question everything, my friends, and visit Annie at Shoreham.  When you think about it, she wasn't really as bad as all that....
Posted by Kirsty Stonell Walker at 22:03