I am awaiting the proof copy of Stunner 2.0 and can be roundly described as 'on the ceiling' or 'off the chain' depending on who you ask.  While I can fake a veneer of nonchalance and calm in type, I am a little unmanageable at present, and so I was taken to see some art to calm me down.  Nothing sorts me out like a nice shed of pretty pictures and Southampton has some corkers, including a room of glory, which I will come to.  So, here is a little guide to the magic of Southampton Art Gallery.

John Everett Millais was born in Southampton (just round the corner from Halifax and Waterstones) and so in a way it is unsurprising that in their rather modern, open-plan art gallery lurks some splendid items of Victorian art.  Take this for example...

Gosh, well we all know how I feel about a man in white tights.  Okay, so possibly not the best picture to start with and Ward was opposed to the Pre-Raphaelites for being 'un-British' (the scoundrels!), but I do love a good historical picture, and Amy's frock is rather splendid, although a bit long.  She ought to be careful in that...

Anyway, what else can I find?

Oh, the despair!  Possibly this isn't a wise choice of painting for me to be looking at as I'm a little wobbly at present and the sight of this sobbing-in-aprons scene is enough to set me off, however gorgeous the colours are, and the use of shade and the delicate white highlights.  Quick! Move on!

Oh Good God, what if there is still spelling mistakes lurking in my book, unseen by the four proof readers who have been so vigilant for me?  What if I haven't spelt my own damn name right?!  The horror!  The shame!  Oh, hang on...

Ah, that's better, see, everything will be alright...I think it's interesting that Holl painted Hope after Despair, which is a rather optimistic way of looking at things.  I usually see these two pictures as a woman waiting for her husband to return (Hope) then finding out he's dead, drowned, gone out without a coat, drunk lye, that sort of thing (Despair), but no Holl showed it the other way round, you may Despair to start with, but stiffen that upper lip and pull yourself together, there is Hope!

Now I'm in a more chipper frame of mind, here is a very romantic image indeed, and more man-tights!  I am a sucker for Shakespeare images, and Dicksee is such a star who gets easily overlooked because he's not whizz-bang enough, but he did some crackers (technical term, obviously).  Not only are the figures beautiful, look at the detail in the architecture, the foliage, and the scenery.  Oh, swoon.

Southampton have a brace of Tissots; the picture of the widow in church which I used in the last blog and The Captain's Daughter.  This picture is subtitled The Last Evening which gives you a hint as to what is going on.  The Captain's Daughter is acting all casual while the rosy cheeked young man tries to pluck up the courage to ask her something.  I'm sure it's something romantic, not 'can I borrow your tiny binoculars?' or 'Is your Dad Captain Birdseye?', but he's off on the boat tomorrow, hopefully not destined to sail into a Holl painting, or else he's not coming back.

How splendid it is to see a Ford Madox Brown painting up-close, as the colours are amazing and fresh and the detail is so sharp.  This riot of russet and gold is another Shakespeare lovely, marvellous in action and looming tragedy.  Those bad sisters, it'll end in tears (as long as you have any eyes left).

Well, as wonderful as all this is, it is mere foreplay (oh, naughty) for what is a room of wonderfulness.  After a couple of rooms painted all pale and modern, there is a dark, wood-panelled sanctum of fabulousness.  The Perseus Story, a series of 10 gouache studies by Edward Burne-Jones line the walls and surround you with their utter beauty.  They were commissioned by Arthur Balfour between 1876 and 1885 but the paintings were never executed.  What we have left are these extraordinary, ocean-toned scenes of Perseus and Medusa...

The room is quite dark and feels everso peaceful, I have to admit I love going there, just to relax and be amongst the beautiful pictures.  Also, in the shop they sell the most gorgeous little book about the series which costs next to nothing.  In times of stress and panic, it's nice to know there is a room I can go, for free, to be soothed.

I think that Southampton probably is better known for its amazing modern art collection (modern, t'uh), and I ought to mention two rather splendid examples that caught my eye.  First up, is Claude Rogers' Miss Lynn...

It seems to me like a rather nice reworking of Manet's Olympia and I love it's watercoloured casualness very much.  Second of all is a very modern piece, at least in terms of date.  Norman Blamey's Vesting Priest with Apparelled Amice from 1991 made me think of Holman Hunt's images of religious men, both from the Middle East and closer to home... 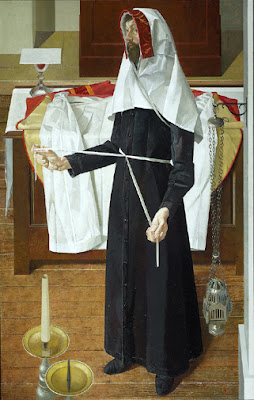 It has a touch of the medieval about it and a hint of Stanley Spencer, and I love that hanging lamp, so I give it my full endorsement.  Who doesn't love an apparelled amice?

So, to sum up, come to sunny Southampton, park in the Toys-R-Us car park (it's cheaper) and walk up the steep hill to the art gallery.
It's worth the climb for the Burne-Jones room alone.

Posted by Kirsty Stonell Walker at 22:08