The Art of Dressing

Pity me.  I had to go clothes shopping yesterday and I loathe buying clothes.  I can never find what I want, or something that fits me, or makes me look like the supermodel I so patently am (were it not for the ill-fitting clothes.  Oh yes, it is the clothes that are to blame).  Well, eventually I found a top I quite liked and I told Mr Walker that it reminded me of one of the Icelandic blouses worn by Jane Morris.  Apparently, saying that out loud in T K Maxx can attract some funny looks, but then next to us was a man arranging someone's divorce loudly on his mobile phone, so really, he should have attracted funnier looks than me.

As I wandered around, attempting to find an outfit for two parties I am attending, I began to think wistfully of long gowns of rich coloured silk, or possibly velvet.  Sigh, something like this....

I have often voiced the opinion that I would happily wander around dressed like Mrs Nassau Snr, but am usually given the reply that I would 'look like a mental'.  Thinking about it, I wonder if Mrs Nassau Snr ever had a similar worry, because what she was wearing wasn't exactly fashion...

Going back to the beginning, around the middle of the nineteenth century, the position of artists in society changed.  Successful artists enjoyed prosperity and social position, and seemingly more people from prosperity and social position wanted to become artists. The influence of the 'artistic' began to spread, particularly in terms of interior decor and dress.  I have one word for you: Morris.


If you weren't sitting on his chair, or hanging his wallpaper, you may well have been considering dressing like his wife.  Jane made her own dresses and the album of photographs owned by Rossetti show her in a sumptuous frock that hangs in a mass of folds and pleats.  In some of the paintings he did of her, Rossetti shows her dress belted, but the waist is a natural one, uncorsetted.

Similarly, Rossetti's plenitude of drawings of his beloved Lizzie show her in simple gowns with pleated bodices and full, loose skirts.  There isn't a corset in sight, even Fanny and Alexa abandoned them.


It's easy to become used to the look of Pre-Raphaelite women when you look at them every day.  My image of 1860s tends to look like the pictures above, rather than what was actually fashionable dress of the time, which was more like this...

Heavens to Betsy, look at the frills.  Oh, the horror.  Oh, and when you sit down in a crinoline, the hoop shoots over your head so everyone can see your pants.  Don't ask me how I know that.  Anyway, thinking about it, there must have been some shock that Jane, Lizzie et al actually dressed like the art they appeared in.  I think it's no coincidence that all of Rossetti's models above could sew and did sew their own dresses, or alter ones that he had in his prop box.  They had no more chance of wandering into a shop and buying their dresses as I have.

Above is a very familiar image of Ellen Terry, the child bride of G F Watts.  What I didn't realise is that she is wearing her wedding dress in the picture, and that dress was designed by Holman Hunt.  Ellen Terry does not seem to have changed her manner of dressed, even when she knew what she wanted to be when she grew up (answer: an actress who wasn't married to G F Watts).

The influence of one of the most famous actresses of the period must have been felt on the world of fashion, but greater still was G F Watts involvement with the Pattle Sisters, or the households of Prinsep family and Julia Margaret Cameron.

The above picture, possibly of her niece May Prinsep, shows a young woman in a dress similar to Elizabeth Siddal's, almost a decade before.  This doesn't seem to be a matter of fashion coming around again, but fashion just not changing.  Her dress is also very similar to the gown worn by Alexa Wilding in her photo, above, mid-decade.  Once the fashion for simple gathered frocks reached Little Holland House, home of the Prinseps, its fashion status seemed set.  Once it was adopted by The Souls, it reached saturation.  The Pre-Raphaelite, or Aesthetic style was shorthand for free-thinking, free-flowing, artistic society.

The woman in yellow on the left is wearing a dress reminiscent of the Pre-Raphaelite frocks, and  much like Edward Poynter's portrait of Lady Elcho.

I'd love to see the above portrait in real life, but it's still in private hands, hence the only reproduction I could find was on the front of a book.  As things often go, as soon as the anti-fashion of aesthetic dress became fashion, it also drew rather negative attention.  The loose waists were seen as reflecting loose morals, and a sort of ill languor and deluded alienation from reality infused depictions of them by George du Maurier in Punch magazine between 1873-1882. 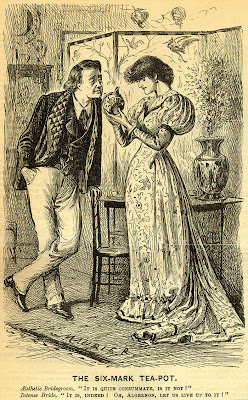 Patience, where the gentlemen were dressed like Oscar Wilde and the ladies wore gowns of liberty prints.

Possibly Wilde's arrest in 1895 put a dampener on gentlemen's artistic dress, but 'artistic' dress continued, due to a feeling of rational, liberating movement for ladies, and the endless need for counter-culture.

Mind you, check out the knee breeches of Joseph Southall, very Oscar Wilde.  Fifty years after Elizabeth Siddal wore a flowing gown without a corset, another artist's wife had donned simple elegance in rejection of the flounces and squeezing of contemporary fashion.

So, I think my path is clear.  As I find myself somewhat more Alexa Wilding than Alexa Chung I must take up my needle and thread and sew myself an artistic wardrobe full of silks and embroidery.  Mind you, Darling Oscar once said 'After all what is fashion? From the artistic point of view, it is usually a form of ugliness so intolerable that we have to alter it every six months...'
M&S might be stocking aesthetic gowns by the end of the summer.  Fingers crossed...
Posted by Kirsty Stonell Walker at 18:56