Rottingdean, Land of my Dreams...

Ahhh, Rottingdean.  Beautiful village, horrible name, but then it seems to go that way. The more terrible the name, the more picturesque the place.  Crudwell? Delightful. The Wallops? Gorgeous.  Rottingdean is picture-postcard yummy, and it is where Edward Burne-Jones saw out his final years.  It was also where Miss Holman and I saw out part of Wednesday.

Burne-Jones had a good reason for wanting to get out of London in 1880.  He had to give evidence in the Whistler/Ruskin  libel case and his health was a little shaky.  They had been looking for a country home for a few years, and fancied being near the sea: 'I should like the sea, but I hate Brighton, and I love Oxofrd but it isn't the sea,' said Ned, explaining his quandry.  When Georgie Burne-Jones walked into the village of Rottingdean in 1880, she fell in love with it immediately, and when she saw Prospect House, by the Green, she bought it on the spot.

Prospect House had a relaxing effect on Ned and Georgie, and Ned started work on a series of watercolour roundels which would eventually form The Flower Book, for example Rose of Heaven, below. 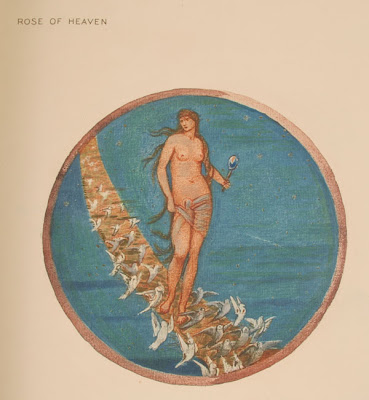 While down at Rottingdean, Burne-Jones developed his interest in Mermaids and all things nautical, working on The Depths of the Sea, and calling a room in Prospect House the Merry Mermaid, decorating it in the manner of a seaside tavern.

His friends visited him at Rottingdean, the Morrises stayed there, as did Crom Price, who had become headmaster at the school Rudyard Kipling attended.  William Morris liked the house very much calling it 'very pleasant and agreeable and suits me to a 'T''.  Thomas Rooke, Ned's faithful studio assistant stayed in the village and helped prepare Arthur in Avalon, which Burne-Jones worked on, in between periods of illness.  Despite loving his home, he hated the exposure to 'rain, wind, cold, sleet, frost, fog, iced baths, snow, slush, mud...' and he often caught colds or developed toothache in the cold winds.

Margaret Burne-Jones married at the village church, and Burne-Jones made three stunning windows to commerate her wedding (the church is co-incidentally The Church of St Margaret).

In addition, Morris and Co made another four windows for the church:

The large window with the archangels is astonishingly beautiful, dominating the east end of the church above the altar.  Both Jacob's Ladder and The Tree of Jesse echo The Golden Stairs with their long, lean structure of ascending (or descending) figures.  Uniquely, neither Jesse's Dream or Jacob's Ladder designs were used anywhere else, so Rottingdean is the only place to see these fabulous, later windows.

A year after Margaret's marriage, Ned and Georgie bought the adjacent property (Aubrey Cottage) and knocked through, making it one property...

In this house many of the 87 illustrations in the Kelmscott Chaucer were done in the years following 1889, and following Morris' death in 1896, Burne-Jones retreated from the world, back to Rottingdean and his visions of King Arthur.  I wonder if Ned was thinking of his dear friend when he was attempting to complete Arthur in Avalon...

After spending an entire day working on the canvas, on 16th June 1898, Ned retired to bed and never awoke again.  His ashes were interred in a corner of St Margaret's Churchyard, where Georgie's joined him in 1920.  On the wall of the church, there are two simple stone markers: 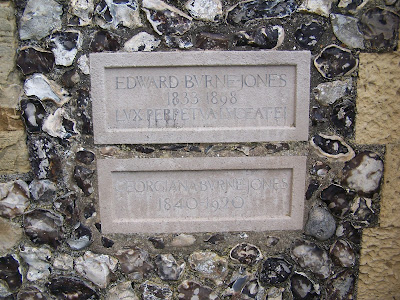 Near them is also Angela Thirkell, novelist and Ned's granddaughter, her 'headstone' is a wooden board which she wanted to 'rot' into the ground... 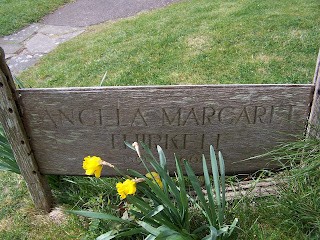 All in all, it's a peaceful and beautiful place, which has helpful boards to show you where the Burne-Jones family lived.  The church was not only open, but contained postcards and guidebooks.  Compared with the experience we had at Birchington, it was easy, and full of pride for its beloved occupant.  The Burne-Jones family made the right choice in moving to Rottingdean, as they are much cherished by the place.  I can't recommend a trip there enough, as even in the rain it was a lovely experience.

If only Rossetti had gone south rather than east...
Posted by Kirsty Stonell Walker at 17:26