While assisting with picture tagging (applying keywords) for a major art website that will be launched in the near future, the inestimable Mr Walker was struck by a quandary.  Someone had tagged Venus Verticordia as a portrait.  While we agreed that the face was recognisably that of Alexa Wilding, the painting was in no way a portrait of her, it was a picture of an incarnation of a deity.  However, is it unfair to dismiss the notion that Venus is a portrait, as it is a fairly accurate depiction of how Alexa looked?

By co-incidence, I was reading The Art of the Pre-Raphaelites by Elizabeth Prettejohn and came across a related argument being discussed.  According to Prettejohn, the issue of portrait/picture has dogged Pre-Raphaelite art since its conception.  She quotes Hans-George Gadamer and his book Truth and Method (1960) about the relationship between model and role: ‘In a portrait the individuality of the person portrayed is represented.  If, however, in a genre picture the model appears to be an individual…then this is an objection to the picture…Hence, it destroys the meaning of the picture of a figure if we recognize the painter’s usual model in it.’

Well, uh-oh.  That counts out about 80% of Pre-Raphaelite art.  Rossetti is well and truly done for, not to mention an awful lot of stuff done by Millais, and poor Holman Hunt… But that would mean discounting the following pictures, as we know the models, so therefore they are no longer counted as ‘successful works of art’.
Due to substantial research into the art of the Pre-Raphaelites and their circle, we cannot help but recognise Elizabeth Siddal, George Meredith and Jane Morris from the pictures, whether or not you would recognise them in real life or not.  Similarly, we also know that Lizzie almost drowned in the bath, Meredith’s wife ran off with Henry Wallis and Rossetti was utterly obsessed with Jane.

All of these facts mis/inform our reading of the paintings, how can they not?  However, is it ever possible to look beyond a personal fact to a role someone is playing?  Or does our knowledge of that fact allow us to experience greater depth of knowledge and perception, allowing us to see layers of emotional torment and distress that the model/painter is subconsciously exuding.  Hang on, my pretentious nonsense phone is ringing, I ought to take this call….. 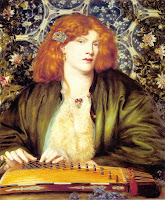 Back to Venus Verticordia.  Is it a portrait?  No, of course not.  It’s a portrayal of a character, which enabled Rossetti to have the freedom to change bits to suit his purpose.  As it is, the body is from an unnamed cook he met, and further sketches exist of Fanny Cornforth posing for the same picture, so it’s fairer to say it’s a bit of a Frankenstein’s Venus, all patched together from different donors. 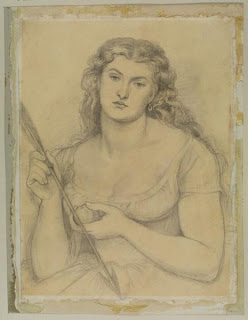 Herein lies the trouble.  Yes, it’s fair to say that Rossetti probably didn’t change a hair on Jane’s head for Astarte because his mental state at the time made him somewhat obsessed with the perfection of Mrs Morris, but it’s not out of the question that he transformed her in some way to make her embody the dark goddess of his vision.
We almost know too much about the Pre-Raphaelite now to be able to appreciate the pictures in the same way that their contemporaries did, but just because we know the identities of the models that inhabit the paintings, we should never forget that unless it is a portrait, it is a work of fiction.  I find it tempting to read more into Rossetti’s pictures of Fanny that is strictly visible, but in some ways that is doing a disservice to the genius of the artist.  I think it’s best to just relax and enjoy pictures for their own beauty…hang on, that might put me out of a job…ignore everything I’ve just said, I’m off to find another picture to apply biographical details to.
Posted by Kirsty Stonell Walker at 16:20