I do love a nice, disquieting child.  Something creepy and sinister always cheers me up no end.  So, imagine my delight to see the following picture:
At first glance, Robins of Modern Times (1857) is a fairly standard ‘child asleep in rural setting’ picture, not unlike Arthur Hughes’ The Woodman’s Child, but then certain aspects of it started to creep me out.  Alarms always go off for me the moment I see apples, and there was something a bit weird about the fact we could see her bare legs, so I had a little research…

The companion piece for this picture is a far better known Pre-Raphaelite work:

Suddenly things are looking far dodgier, and much more interesting.  Spencer Stanhope intended the pictures to be the first and last chapter in the story of this girl’s downfall. Thoughts of the Past (1858-9) is a moment of epiphany for a young prostitute, much like Holman Hunt’s The Awakening Conscience.  Instead of rising to greet the light from the window, Stanhope Spencer’s girl stares back into the room at us, the customer and participant in her moral demise. She looks tortured and desperate, and the view of the river from her window hints at a watery suicide in the near future.  But what led the poor girl to this unhappy state?  Back to the meadow….

It was a commonly held belief that most of the prostitutes in London had been despoiled country girls, ruined and forced to hide their shame in the faceless sex-trade on the streets on London.  Whether or not that’s true, and frankly it sounds like nonsense, this does seem to be the story in the two pictures.  The frighteningly young girl has presumably just lost her virginity; she has taken off her daisy crown, as if she is putting her childhood to one side.  The presence of two apples indicate that she has not been alone, as do the pair of robins, and her rather livid blush indicates that she has been up to something a little bit naughty.  Now, I find her age to be disturbing, she does look horribly young, but at the time of painting the age of consent was 12.  Have a quick shudder and we’ll continue.

The meaning of the title is somewhat obscure, and the description of the painting in both the catalogue for the 2004 exhibition The Pre-Raphaelite Vision and a very fine article on it by Simon Poë in The British Art Journal, give no reason for the robins, other than they are cheeky, daring birds that do not display appropriate caution.  While this is a fair guess at the significance of the title, I wondered about the image of the robin in folklore.  There exist myths of robins singing to Jesus on the cross and being stained by his blood, hence the redbreast.  Now, without being too graphic, this girl also is suffering and possibly bleeding and the robins’ presence in the picture could be to comfort her in her time of injury and need.  Also, the scattering of leaves around her bring to mind the robins in Babes in the Wood (hurray for Wikipedia, I had forgotten about this!)  In the fairytale, the robins cover the dead children with leaves, and although she isn’t dead, it could be that Spencer Stanhope is implying she has ‘died’ in her old, innocent life, to be reborn into the life that takes her to London and her eventual watery suicide.

Goodness me, this is all a little grim.  It is a very beautiful picture, the colours are luminous shades that are equal to the brightest of Holman Hunt, and the figure of the girl is so typical of a little ‘stunner’ in her blue dress that matches that of Jane Morris’ dress, painted in 1868. 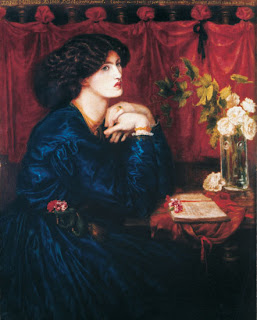 Stanhope Spencer had a studio beneath Rossetti’s in Chatham Place, where he painted Thoughts of the Past, using Fanny Cornforth for the original model.  It never takes me long to bring it back to Fanny. Had the pictures been painted in the opposite order, I would suggest that possibly the subject for the works had been suggested by Fanny’s story.  She was a rural girl, living ‘immorally’ in London.  However, as the child came first, I wonder if Fanny’s back-story made her the ideal model for the adult incarnation of the fallen farm girl.

It does remain one of the more subtly disturbing images from the Pre-Raphaelites, with all the punch of The Awakening Conscience and the natural detail of Ophelia but a puzzling, disquieting story that brings the canvas to life.  Whether or not you’d want to hang it on your wall is another matter…
Posted by Kirsty Stonell Walker at 16:22