He’s Not the President of the Royal Academy, He’s a Very Naughty Boy

Of the three founding painters of the Pre-Raphaelite Brotherhood, Millais is not the one who I think of when I think of sex.  I think of Rossetti, who is a complete saucepot, and possibly Hunt with his endless struggle against the temptations of Annie Miller.  Lovely Millais was such a sweet boy, who innocently courted Effie, what a gentleman.
Imagine my horror, as I read Franny Moyle’s Desperate Romantics, when I came across a rather surprising description of Millais’ Isabella and Lorenzo (1848-9). 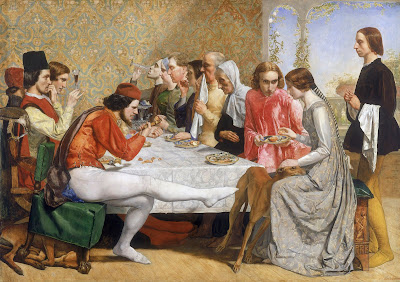 It’s an image I am very familiar with, and one you see in practically every book on Pre-Raphaelite art, to the point where you don’t bother looking at it anymore, not properly.  Moyle draws attention to the themes of sex and death that are prominent in the story of the doomed lovers, and points out the figure of the brother at the front, kicking at his sister while cracking nuts.  Now, I have read interpretations of his actions as being slightly incestuous, as if he is kicking at her womb, but I have never before read this – ‘The shadow of his forearm on the table looks like an erect penis, a mound of white ejaculate indicated by salt spilt on the cloth.’ 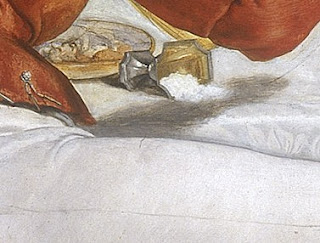 Well, my goodness me, Millais, I expected better from you.  However, that is exactly what the shadow looks like, but I would argue that the spilt salt represents spilt blood as it seems to cut across the ‘head’ of the shadow, rather than come from it.  Coupled with the fact that the brother is cracking nuts (possibly a metaphor for the breaking of Lorenzo), I think the entire figure of the brother is imbued with violence of a very basic nature.  I think Millais hints at the futility of the man’s aggression, how ultimately he will not succeed in keeping Isabella from her love.  The brother leans forward to kick at one dog, but in doing so he endangers the other, curled beneath his chair.  What is suggested is that by striking at Lorenzo, he will ultimately injure Isabella,  and he is not in control of his violence, it is in control of him.
I admit the shadow penis did make me look at the picture again, if only to say ‘Well I never…’  On viewing it afresh, after almost twenty years since I saw it for the first time, I suddenly appreciated the sheer quality of Millais’ depictions of his friends around the table.  As beautiful as any formal portrait, you can see Frederick Stephens, Walter Deverill and Rossetti, all as brothers of the unfortunate Isabella.  The figure of the particularly nasty brother at the front was drawn from memory by Millais, from John Harris who bullied him at school.  William Michael Rossetti is the doomed Lorenzo, sitting next to Millais father, who would appear again as Joseph in Christ in the House of His Parents (1849-50).
When I had the image open on my computer, I began to split it into different elements and the perfection of the tiny details becomes apparent.  Without looking at the image again, think about the bird of prey.  He’s sat there on the back of a chair, but have you really looked at him?

He’s pulling at the white feather of a dove, and his juxtaposition to the aggressive brother refers to the violence against the innocents.  In comparison to the very lifelike rendering of the dogs, it looks almost statue-like and in one account of the painting I read it was described as a carved ornament on the chair.  The feet of the aggressive brother’s chair have ‘hawk-like’ feet, linking him explicitly with the bird, and his whole posture seems to link him with a swooping bird, claws outstretched, and the grouping of him, the bird and the chair mark him as the one to most actively seek the death of the gentle young man opposite him.
Lorenzo’s innocence is symbolised in the flowers that grow above him, the white roses, as opposed to the passion flowers that are above the demur Isabella, hinting at her more determined nature and love, which will give her the strength to reclaim her lover’s head after her brother’s attack.

The only character I can’t get a handle on is the strange looking chap, pottering in from the right.  By cutting him out, you do feel the canvas is unbalanced, even though Millais unevenly loads the table with diners, using impossible spacing, yet making it work.  The gentleman lurking behind the lovers looks shifty and seems to be a personification of a ‘dark cloud’ hovering about.  He is a very curious character, not bringing anything to the meal, other than possibly a cloth, and filling the right hand side of the canvas, partially blocking the view of the pot of basil that is out on the balcony, that may well be the final resting place of Lorenzo’s head.  The only reason I can think for him to be there is as a lesson in the Pre-Raphaelite elimination of chiaroscuro (or the contrasts of light and darkness that create 3-dimensional modelling in art), with the flat black of the tunic and the yellow leggings that almost vanish into the background.  The work, painted when he was just 19, could well be read as a bit of a slap from Millais to the art world, as he breaks the rules, makes impossible and contradictory decisions in design and execution and pulls off a powerful and complete picture filled with meaning and intent.
And he was still four years away from doing Ophelia.  Frankly, I don’t care how filthy he is, the boy’s a genius.

Posted by Kirsty Stonell Walker at 13:58