I was attempting to explain Narrative Art to Mr Walker the other morning.  I sat there clutching Narrative Art by Julia Thomas and explained the notion of a painting with a back story, possibly not explicit from the title.  A fairly straight forward concept, but it can be anything from a single question of religious exploration in The Doubt: Can these Dry Bones Live? (1855) by Henry Bowler, to the more complicated multi-narrative of William Frith’s epic Derby Day (1856-8).  Anyway, I was flicking through the book as I talked and came across one of my favourite perverse paintings, Too Late (1858) by William Windus. 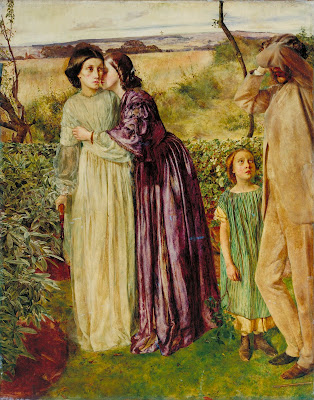 It is such a melodramatic scene, and the central premise is that the man has arrived ‘too late’ to marry his former sweetheart as she is now consumptive.  However, a lot is left unexplained, or rather left to the audience to decide.  Who is the other woman in purple?  Who is the little girl?  Why is there a windmill in the background?  OK, so the last point isn’t particularly relevant, but you get the idea. 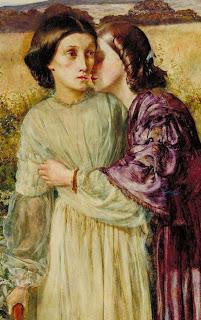 The pair of women have always struck me as odd.  Why does the healthy one kiss the sick one?  What is the healthy woman’s relationship with the man?  Or the child?  The common explanation is that the two women are possibly sisters or friends and the healthy one ran off with her sister/friend’s beloved, maybe after he got the consumptive woman pregnant, hence the child.  There’s an episode of Jeremy Kyle waiting to happen.
While looking at this picture I was suddenly struck by something.  Looking again at the two women, I had the impression that the sick woman was clutching her side, much like the woman in Philip Calderon’s Broken Vows, demonstrating how her heart was broken, or that she had been wounded by his infidelity. However, in Too Late, it isn’t the betrayed woman's arm, despite the sleeve ending in that horrible pallid green colour, it’s the healthy woman’s sleeve.  Or is it?
What if there weren’t two women in the picture, or even three if you count the little girl, but only one?  Humour me...

If we accept the standard course of Victorian fictional love, what if the man and woman were childhood sweethearts?  The little girl could then stand for the woman as a child, staring in horror and disbelief at what her innocent love does to her. 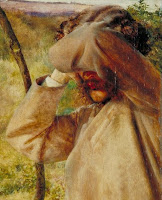 The little girl turns into a fine looking young woman who is betrayed somehow by her erstwhile suitor, and turns away from him, becoming in time the fragile, ill woman.  They morph together, the arm being a mark of the transition from one state (healthy) to another (dying), the colour draining from her dress as it seems to have done from her entire body.  The man covers his eyes in horror as he is confronted with not only his dying beloved but his childhood sweetheart and young lover too.
What did he do?  I think he made her wait. And wait. And wait.
While looking at the shiny hair of the child I was struck by how it reminded me of the woman in The Long Engagement (1853-55) and April Love (1855-56) by Arthur Hughes.  I brought up the image of The Long Engagement next to Too Late and made a very unlady-like noise.  Look at the purple dress and the purple cape, and the hair of the little girl and the women in the Hughes paintings.  What really startled me was the man had similar facial hair and could be the same man.
Hughes’ paintings follow a sort of narrative, if you read them in reverse order.  April Love shows a young woman experiencing the end of the first phase of love, her ‘April’ love, as she considers that her love will have to be more robust and mature if she is going to remain with her beloved forever.  He kisses her hand in the background, asking for forgiveness as she considers the rose petals, symbolising the fragility of love, and the ivy, symbolising loyalty and fidelity. As The Long Engagement seems to follow the same woman, now older, it can be supposed that what caused the argument was that her beloved was unable to marry her soon, hence their long engagement.  Again the woman considers the ivy as it covers her carved name, ‘Amy’, on the tree, while her dog emphasises the quality of loyalty.  My word, that dog’s hair is almost as glossy as hers. The quote that accompanied it, ‘For how might ever sweetness hav be known/ To hym that never tastyd bitternesse?’ intimates that the ‘bitterness’ of the long engagement will make the ‘sweetness’ of marriage all the more apparent. 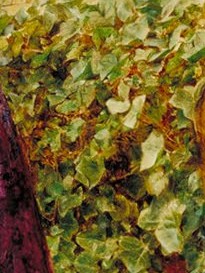 My theory is that Windus was aware of these paintings and painted a third picture, completing the story in rather a bleak way. Instead of marrying her, the young man has left it too late to taste the sweetness.  The ivy still grows by the woman, all over her wall, but it has all been for nothing as she is dying.  Thomas suggests in Narrative Painting that the subject of being jilted by your fiancé was in the public consciousness at this time through the litigation known as Breach of Promise and that any woman who had been engaged or involved with a man was seen as ‘soiled goods’ and therefore not touched by anyone else.  I think Windus maybe hinting that this is an unfair assumption, that his woman remained virginal and pure, but now only has death as her option.  Remember the windmill?  Well, it could be that the windmill symbolises her purity, as windmills sometimes were used to denote martyrs, I suppose because their sails made a cross.  That odd little windmill between the man and the woman could represent her imminent virginal death, a martyr for love and false belief in the man who was meant to love her.
I know it’s a leap, but you could read that Amy, standing in her little ivy-covered arbour seals her fate by agreeing to her long engagement with her childhood sweetheart, when the man either can't afford to or doesn’t intend to marry her at all. Windus used a quote from Tennyson’s Come Not, When I am Dead, which includes the line ‘Wed who thou wilt: but I am sick of time’.
That sounds like a woman sick of a long engagement to me.
Posted by Kirsty Stonell Walker at 20:38