Lewis Carroll: Photography on the Move Q&A with Lindsay Smith

I had the pleasure of meeting Lindsay Smith last year at the Julia Margaret Cameron conference in Portsmouth.  She was the chair of the panel I was on and then gave a fascinating paper on Lewis Carroll and photography, which made me very eager to read her book.

Lindsay's focus is on Carroll's travels, both real and internal, recording and viewing the world as it was and as he wanted it.  Through Carroll and his photographs, Lindsay explores the man, the collector and the outsider, forever trying to see, understand and be part of his work. It's too easy to see Carroll's photographs as proof of modern opinion against him, and reading Lewis Carroll: Photography on the Move, you are reminded not only of the difference in how photographs of children were once viewed, but also how collecting may have been a greater passion than the subjects.


I must admit to a fascination with Carroll's relationship with Tennyson and Julia Margaret Cameron, and his attempts to become part of the community in Freshwater, but Lindsay's book takes us from Oxford through England and even as far as Russia.  What was he searching for and did he ever find it? One thing is for sure, Carroll's photographs are beautiful, outstanding quality and the ones in the book are beautifully chosen.

I was lucky enough to ask Lindsay a few questions about her new book...


Q. Do you think Lewis Carroll is hunting for something in his photographs? Do you think he knew what he was looking for when he traveled around or was it just an compulsive need to collect?
It is interesting to question whether Carroll was ‘hunting for something’.  I believe photographs function for him as complex forms of attachment to people and places.  As I attempt to show in the book, to contemplate a photograph is to activate memory in ways that Carroll found fascinating. As he arranges sittings, and buys photographs on his travels, there is certainly a sense in which, according to the impulse of the collector, each acquisition generates the desire for another to add to the set.


Q. When I read Alice in Wonderland I always assume Alice is Lewis Carroll, trying to make sense of the adult world. Do you think his photographs were an escape from real life or an attempt to capture it?
Yes, I think that Carroll’s photographs allow him to inhabit other worlds as do his books for children. I don’t read them so much as an escape from the real world as a desire to capture his fascination for particular aspects of it that he relished. Photographs also preserved experiences, such as the theatre, that Carroll felt guilt at taking pleasure in.  As a technology of capture photography represented more than a hobby for Carroll. He enjoyed its conceptual possibilities, temporal peculiarities, its implications for memory and prophecy. But he also treasured photographs as material objects for their unique attachment to the subjects they represented whether that be a child or a particular place.


Photographs functioned for Carroll as keepsakes and souvenirs, as in evident on his trip to Russia, and as they continue to do for travelers today snapping on their camera phones. But photographs also conveyed to him the physical closeness and presence of an individual in the manner of a signature, - hence Carroll’s practice of including the signatures of sitters in his albums. I regard photography for Carroll as part of a larger visual aesthetic fuelled by travel and enjoyment of even the most banal entertainments. This is why I consider some of those photographs he had taken at William Kent’s studio in Eastbourne. They demonstrate that Carroll remained invested in the medium during the 1880s even when, as far as we know, he was no longer taking photographs with his own camera.


Q. Lewis Carroll's relationship with the Tennyson family fascinates me - do you think he wants a father/child relationship with Tennyson or was it just hero worship?
﻿
Carroll’s relationship to Tennyson is a complex one. He clearly admired Tennyson’s poetry but he also made a nuisance of himself in wanting to photograph the poet. Carroll was not alone, however, in his pursuit of Tennyson for photography. One only has to think of Julia Margaret Cameron and the lengths to which she allegedly went to get Alfred to sit for her camera. Yet Carroll over stepped the mark on several occasions.  One that I mention in the book is his suggestion in 1872 of speech therapists for Lionel Tennyson. The poet appears to have taken offence at Carroll’s suggestion of such therapy for his son. Having considered the debilitating effects such ‘hesitancy ‘ had had upon him and upon his sisters, I believe Carroll wrote to Tennyson because he empathised with Lionel.


In an earlier occasion in 1857, having taken photographs of Tennyson and his family in the Lake District, Carroll received a letter from Emily Tennyson ‘begging’ him to destroy the photographs he had taken of her and her husband, and including a professional portrait of the poet by the photographer Mayall. Tennyson was sensitive about his photographic portraits becoming available to the public and, since Carroll liked to make copies of his portraits for friends, it appears Tennyson was worried that he might distribute copies. Carroll’s visits to Freshwater indicate to me that he wanted to feel part of the incredible literary and artistic set that frequented that western part of the Isle of Wight. Yet, he remained somewhat marginal to it.  In my paper at the recent Portsmouth Julia Margaret Cameron bicentenary conference, I showed that Rose Franklin, a previously unidentified child model of Cameron, was first photographed by Carroll. What this occasion demonstrated was that Cameron’s subsequent interest in photographing the child most probably came from seeing copies of Carroll’s photographs of her in Freshwater.

Do you think his name will ever lose its stigma? Do you think there should be a club for misunderstood Victorian men - he and Ruskin could be founder members...

The question of ‘stigma’ is a difficult one.  As a nineteenth century scholar I am frustrated by the transhistorical ways in which people discuss sexuality, desire, perversion and paedophilia in the period– as if we can simply unproblematically apply a term, or current understanding of it, to the Victorians.  I found the film Effie Gray based on Suzanne Cooper’s biography disappointing in this respect. Although it succeeded in telling Effie Gray’s story, which was really important, it made no attempt to shed light on the infamous wedding night and instead presented Ruskin melodramatically slamming the door with a look of horror on having seen his wife’s naked body. Lost was an opportunity to attempt to understand in a nuanced way the well-known non-consummation of the marriage. In presenting Ruskin in sensational terms as a cruel sexual deviant no pressure was put on the accepted version of this notorious Victorian story


Relatedly, there exists an assumption that photographs can reveal particular practices and that they function as transparent, easy to read documents on the past. Indeed, people make assumptions about nineteenth century photographs in ways they would not dream of doing about paintings, drawings or engravings. This has to do with the indexical nature of the photographic image of course, that the person or object photographed was present at the point of taking, whereas for a painting they need not have been present to the painter during its production. It is however a simplistic distinction. For it bypasses the complex issues that come to bear when taking and looking at photographs in the Victorian period when the invention had not yet established a determinate relationship to other methods of representation. At the time that Carroll encountered it, photography was a novel medium and all aspects of its status and its relationship to other media were under debate.


Q. Do you have a favourite photograph of his?

It is difficult for me to single out a photograph but I have long been fond of Carroll’s The Tennysons and the Marshall’s (p. 181) taken at Monk Coniston Park in the Lake District in 1857. As I say in Chapter 5 of the book, it represents a rare portrait in Carroll’s photography of a father and infant son and conveys the intimacy between Tennyson and the young Hallam cradled in his lap. For me this tableau conveys the quality of touch that the medium is able to arrest along with memory that, as I explain, becomes here a form of prophecy. The intimacy between poet and his son is highlighted by contrast with the more formal arrangement of Marshall, his wife and daughter. It is a rare ‘domestic’ photograph of Tennyson and very different from those picturing him as revered laureate.


For similar reasons, Ella Chlora-Monier Williams and a Younger Brother 1866 (p. 110) is a favourite photograph of mine and rarely reproduced.  In it Carroll has captured the closeness between the siblings and as I’ve suggested in the book he has arrested the contingent, the fleeting moment, as they pose concentrating on the dolls they hold. There is something deeply moving about the ways in which both of these photographs situate their child subjects. 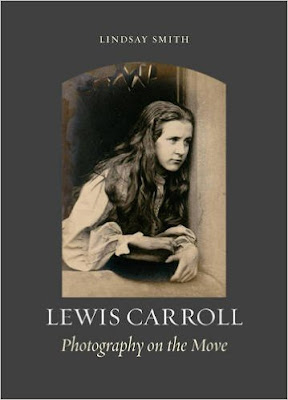 Many thanks to Lindsay for answering my questions and I can thoroughly recommend Lewis Carroll: Photography on the Move which is  informative, entertaining and a joy to read. The photographs are reproduced in lovely quality and many of them are unfamiliar.  It certainly does give a new and refreshingly unscandalised examination of this intriguing Victorian photographer...

Lindsay's book is available from here (UK) or here (USA) or through all good bookshops.
Posted by Kirsty Stonell Walker at 17:55