One thing people who have known me far too long will know is that I love puppets, so much so that when I was a teenager I wanted to grow up to be a puppeteer...


And actually, even though art history's gain has been puppetry's loss, I still love puppets.  I blame early exposure to the Muppets...

When I was in Prague in the Autumn I couldn't resist buying a wonderful handmade puppet from Axa Marionettes.  She is a fairy, made by the extremely talented Xenie...


She's over two foot tall and is just exquisite.  She also added about 2kg to my luggage but was utterly worth it.

Anyway, I was wondering about the Victorians and their puppets...

Puppets appear in paintings as part of the burgeoning leisure time enjoyed by Victorians.  As fairs and circuses visited, they brought with them a Punch and Judy or little dancing marionettes, which often echo the little dancing children in the audience.


Punch and Judy was less popular in early Victorian times due to its subject matter probably; for those that don't know, Punch and Judy is the rather violent tale of Mr Punch, a right sod who batters his way through his family, law enforcement, feeds his baby through a sausage machine and then gets eaten by a crocodile, or something.  Much hilarity ensues.  As you can imagine it was wildly popular in Restoration times but became synonymous with the seaside culture enjoyed by the Victorians and their popularity revived. The man behind the curtain working the puppets was known as the punchman or the professor.  There was often a man out front, keeping the audience involved (such as our chap with the drum in the picture above), and he was known as the 'bottler' (he collected the money or 'bottle').


In this Regency painting, the Bottler appears to be dressed as Mr Punch and seems to be going bonkers.  A man observes the whole terrifying scene from his house, considering how much his house price has dropped since they arrived outside.


These days, Punch and Judy puppeteers tend to appear at events or you pay up-front to watch, so there is no need for a bottler, but in art, they tend to be there with their drum, taking the money and engaging with the audience.


There is something about images of Punch and Judy that give the impression of a bit of colour in a otherwise quiet world.  In the image above the booth is cheerful and Mr Punch and Toby the Dog appear very bright and colourful.  Is Toby a real dog?  That is an awfully realistic dog. All else in the picture (bar the little girl in the front) is quite neutral coloured, a sort of dull echo of the action in the booth.  I especially wonder if we are supposed to notice the man in the brown smock with his hand on his hip in the middle of the crowd, with the stick over his shoulder.  He's in profile facing Punch, also in profile.  Is he a right sod too? I notice that the girl in the front in the pink bonnet is wearing a checked skirt that seemed to echo the booth.  Are we to assume her life is going to be as colourful as the puppet show? 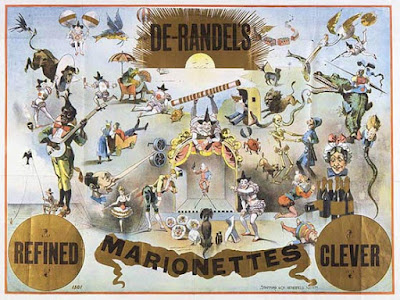 Although I dabbled in hand puppets (like my Romeo and Juliet I was pictured with in the newspaper), I always loved marionettes.  There is something elegant and magical about the tiny people moving about by the tweak of a string.  De-Randel and his marionettes (both refined and clever) were in England in the 19th century.  His puppets were bought from other shows which shared stories and scenarios, and audience came to expect certain stock characters from puppets shows, such as skeletons, minstrels, stilt walkers and so on...

Marvellous.  It's not a good show without a drunken wastrel.  Anyway, further to this, I was delighted to find out a very special sort of puppetry made the rounds in the 19th century...


These two lovely puppets were part of a charming story of Maria Marten, a molecatcher's daughter, and her lover William Corder.  Once upon a time there was a pair of lovers and they planned to elope.  They met at the Red Barn near Polstead in Suffolk and off they vanished, never to be seen of again until her body turned up buried under the barn.  He was then hanged for her murder. That's the way to do it! 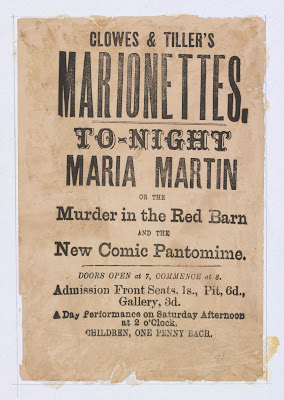 It's all very Penny Dreadful and the Victorian's love it but I am both delighted and puzzled to work out how on earth they managed to re-enact the whole murder with stringed puppets. I am also glad that you can see it with a new comic pantomime and children can get in for a penny.  Awesome. If you feel up to it, you can watch a bit of it here.


I was a child when I fell in love with puppets, mainly thanks to living close to the Pelham Puppet factory. For tiny hands, they are both instantly accessible and something you can develop a skill for, making the puppet move in more and more lifelike ways. The child in the painting above is just learning to control the figures which have rods by the look of it.  The metaphor for life is obvious, that children learn how to control themselves and others as adults.  I wonder if we are to see children and puppets as a comment on innocence.  The children roar with laughter at the exploits of Punch, the lord of misrule, and his appalling and murderous ways.


In the Victorian tale I'm sure Punch was shown the error of his way by the constable and the children would have learnt that mass murder was frowned on.  Similarly, the Red Barn Murder play would show us how errant young men who want to run away with us will probably bump us off and bury us under a barn.  That is something I could have done with learning earlier. All useful life lessons and the stuff of Jeremy Kyle. I was beginning to think that we have nothing like that anymore, we no longer have puppets telling us stories but we had Spitting Image and the marvellous Mongrels, not to mention Team America (for those who wondered about how peculiar a marionette sex scene would be.  Answer, very) and obviously The Muppets. One thing that brings women of my age together is the effect the film Labyrinth had on us, and it wasn't just David Bowie's tights, but also the wonderful dark magic of Brian and Wendy Froud.  Puppets are still very much with us and I for one am delighted to be pulling the strings.
For those that would like an Axa Marionette of your very own, they ship worldwide and are wonderfully friendly people.  Check out their marionettes from the link above.  Many thanks to Xenie for the beautiful fairy who has her name, and to Petr Našic for looking after our puppet until we could collect her from his studio.  It made Prague even more special to bring her home!
Posted by Kirsty Stonell Walker at 17:16