Well, we are half way to Christmas Eve and I'm delighted to find it is Saturday.  It does give one the chance to snooze and not take off one's dressing gown all day.  It's chilly and I'm not in the mood. Also the most glamorous thing that is going to happen today is buying a shed.  Quite.  I need some art to cheer me up...


See, that's what I'm imagining Winter is like - all snow and romance under a red brolly.  The gentleman has his eye on the young lady and her furry muff.  I especially like the hint of pattern in her gown amid the dark mass of their clothing.  The speckling of snow over them adds depth and delicacy to the scene.  They appear to be the only people there, and for each other, that might be so.


Anna Whelan Betts (1875-1952) was an American illustrator who specialised in romantic scenes. Her sister Ethel was also an artist and Anna studied under the famous artist and illustrator Howard Pyle. Her illustrations first appeared in 1899 in Collier's magazine and then graced the pages of many American publications such as Harper's, Century Magazine and Ladies' Home Journal.

She worked until the 1920s when she started to lose her eyesight.  She then taught art in boys' school until she retired in the 1940s and went to live with her sister Ethel. Looking through her illustrations, her world is one of courtship, warm summers, rose gardens and coyly regarding the object of your affection.  Her work changes over time from traditional Victorian art to a more abstract outline, as seen in Coming Home for the Holidays which dates from the end of her career.  The block of colours outlined in black give a modern feel to a seemingly Victorian scene.


Going back to my chosen image for today, I love our couple in the snow, their dark clothes seem to draw them together as they shelter from the harsh weather.  You wonder if they are engaged, or newly weds, or whether this is their only chance for a sneaky snuggle out of sight of chaperones. While he gallantly offers her the use of his brolly, she seems to be a little shy of his attention and I bet her cheeks aren't pink just because it's chilly.  May you all have someone to snuggle up under a brolly with.  If not, go for a little stroll in the snow - you never know your luck... 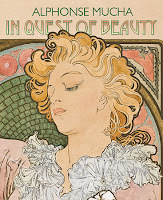 Today's present suggestion is the catalogue attached to the travelling Mucha exhibition that appeared at the Russell-Cotes Art Gallery in Bournemouth and is now on show in the Centre for Visual Arts in Norwich.  I am especially delighted to recommend this book as Mr Walker wrote part of it.  It's a lovely glossy book full of colour illustrations and will make your Christmas that bit more glamorous.

To buy the book, go to the Mucha shop here.


Posted by Kirsty Stonell Walker at 14:52