Friday 18th December - I did but see her passing by

So, we only have a week until the big day!  I've finished work until next year and not a moment too soon.  Tomorrow I can look forward to a bit of a lie-in rather than my usual 4.30am start.  Let's have a nice painting to celebrate...


The full title is a line from a poem by Thomas Ford entitled 'There is a Lady sweet and kind' -  'I did but see her passing by, / And yet I love her till I die.' In the background is the man, turning to view our lady with the giant muff as she and her companion with the big cross and Bible pass by.  The poem dates from Ford's collection Music of Sundry Kinds from 1607, just out of the Tudor period.  The lady with the muff has a beautifully opulent dress to match her accessories.  Described in the poem as having 'winning looks' and wit and smiles enough to destroy a man's reason and control, she is a bright spot of colour in an otherwise drab street.  I find the contrast between the man's stillness and the frenzy inside him expressed in the poetry, very interesting.  The painting cannot express adequately all that the poem pours forth, but seeing them together shows you how the poem is his internal monologue and he has simply stopped in the middle of the street, completely besotted.

The illustration comes from The Book of Old English Songs and Ballads (1915).  It was a popular compilation of over 50 traditional poems and songs from writers such as Shakespeare, John Donne and Andrew Marvell. Brickdale provided 24 illustrations to the volume, including Who is Silvia? What is she and Gather Ye Rosebuds While Ye May...

As I may have mentioned on one or two occasions previously, I love EFB's illustrations.  I own a cheap copy of her illustrated Tennyson (see the posts from here) and the exhibition on her work at the Watts Gallery was a delight. She marries a myriad of details with a strong line and wonderful gem-like colours, capturing moments in the poem as well as general feelings or meanings.  In I did but see her passing by, we have that split second when the man turns to view the woman who he has fallen for, but in Who is Silvia? What is she﻿, Brickdale offers us a Pre-Raphaelite beauty to ponder upon.
One of my favourites of EFB's paintings (that hangs in Mr Walker's museum, see here for a video of my husband handling it. My husband, fine art, and power tools - it doesn't get any more exciting than this...) is also based on a poem.  If One Could Have That Little Head of Hers comes from a poem by Robert Browning, also about a man in utter, smitten love, entitled 'A Face'. Again, it is a face conjured by the poem, a perfect face described by our lovelorn narrator, which when you think about it, is quite a difficult task.  I'm sure we were all thinking something different when we read the poem, so to be offered one face to cover all our fantasies is a tall order. Somehow Brickdale manages to convince us that that was the little head we were thinking of all along. 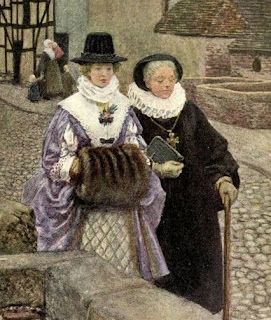 The contrast between the two figures in I did but see her passing by is striking.  Possibly they are mother and daughter.  The woman on the right is dressed in black, almost clerical robes, her crucifix rather ostentatious and her Bible very visible.  The muff lady is in a lavender gown with a quilted front and flowers caught in her neckline.  They could symbolise sacred and profane, pleasure and denial, and you do wonder if the mother carries the big Bible to smack away her daughter's admirers.  Either way, that is an impressively fluffy muff, no wonder the man stopped to stare. Hang on though, we don't know which one has caught his eye.  If I was feeling naughty, I would suggest that our chap in the street might have his eye on the Mum.  maybe he like a woman of mystery, a woman inflowing gowns, a woman with a gert big Bible (as they say in Cold Comfort Farm).  Ah well, we shall never know...
Today's present idea is a free gift to you.  You can download The Book of Old English Songs and Ballads, complete with illustrations from here.  Enjoy!
See you tomorrow...
Posted by Kirsty Stonell Walker at 21:11