It all started when I watched It Follows this week... 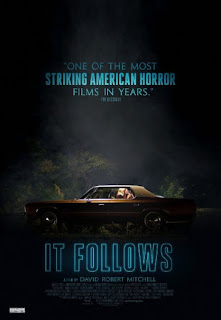 I am a sucker for a 'curse' film, where the likeable protagonist accidentally gets the attention of a grumpy entity, bent on nastiness.  Films such as The Woman in Black, The Ring (in Japanese for purists, or the fairly decent remake if you are not feeling like subtitles) or Drag Me To Hell all have people stumbling into the bad books of ghosts who want to kill them. The reason I particularly liked It Follows is that the motive of the entity is never explained.  There is no lost child, no awful childhood, it just exists and the heroine spends the entire movie either running away from it or attempting to kill it.  When I considered that, it brought to mind this...

﻿
I have seen much written in the past on the nature of the Lady of Shalott's curse.  Why was she cursed?  Who cursed her? No doubt there is probably a Shalott Origins story somewhere, but on the whole we do not know the details of the curse, just its rule and the result of breaking that rule. 'The Lady of Shalott' is one of those poems that is at the heart of what we think of as 'Pre-Raphaelite' due to its perceived repetition and presence in the early years of the movement.  In fact it is one of those subjects that seems to book-end the entire movement.


What was the attraction of Tennyson's poem?  Taken at its very core it's a poem about a sudden and unexplained death.  Both Rossetti and Hunt suffered the deaths of their wives, and such deaths were not uncommon.  Tennyson himself lost his best friend, Arthur Hallam, taken so suddenly in 1833, the same year as the poem was published.  So is Arthur Hallam the Lady of Shalott?

It is without doubt that the sudden death of Arthur Hallam had a profound effect and influence on Tennyson's poetry but as he presumably wrote 'The Lady of Shalott' well in advance of publication, it was unlikely to have cast its shadow over that particular verse.  The theme is the same though, death that just comes for no good reason, whether it is looking out of a window or going on holiday to Vienna.

The reason that It Follows surprised me was the lack of back story, something that also frustrates readers of 'The Lady of Shalott'. By denying the reader that knowledge, Tennyson firmly roots his poem in the past when science had not yet illuminated cause and effect.  Whilst it is undeniably supernatural in nature, in the age of science the curse would be explained away, given a backstory and motivation.  In the same way that the Discovery Channel run 'scientific' programmes explaining the Plagues of Egypt or Noah's Ark (thereby entirely missing the point of faith), we need to have everything, no matter how mystical, explained and rationalised.  In horror movies I suppose it exists to reassure the viewer that with that knowledge they would outsmart the evil or at least vanquish it.  If the Lady of Shalott knew the cause of her curse she would be able to appease the spirit for its terrible childhood and make off with Lancelot and his shiny thighs.  Everyone would be happy.  Tennyson gives no explanation, just the fact that there is a curse and you have to abide by the rules.  So is it a woman problem?

At the heart of 'The Lady of Shalott' is a woman who broke the rules, so did Tennyson think women should know their place? That seems unlikely as I have never seen Tennyson as a particularly sexist writer, even by the norms of the nineteenth century.  It doesn't seem very likely that the poem is about the misadventure of women who stray beyond their sphere and attempt to participate in the outside world and feel all sexy.  Plenty of poems probably exist on that subject but 'The Lady of Shalott' isn't one of them, so what was he getting at?

The bare facts of the story are these: the woman lives in a tower.  If she looks out of the window she will die.  She has to leave the tower to complete this, it seems. It is the irresistible pull of the outside world that enacts the curse. She leaves the tower, gets in the boat, by the time she floats down to Camelot, she is dead. She doesn't die of lovesickness, or pine away like other doomed heroines, it is the act of living, or feeling alive that kills her.

I wonder if Elizabeth Siddal was thinking the same thing as me when she did the above drawing.  She, like many women, had the experience of miscarriage.  In some ways 'The Lady of Shalott' can be seen as a metaphor for still-birth, the child alive within the safety of the mother but then not, once out in the world.  In times before the many and various tests we undergo now while pregnant, the outcome of pregnancy and birth were without backstory, without reason.  What it lacked in explanation it made up for in danger and the whole process terrified and baffled the most reasonable of people.  That's a little too specific though, for a man in his mid twenties.  I doubt Tennyson, no matter how empathic I find his verse, wrote a metaphor for still-birth, but I do believe I'm in the right area.

When the Lady decides to participate in the outside world, it kills her.  I think what Tennyson is showing us is the moment of birth to death in a blink of an eye. While in the tower, she is safe but she is unable to remain there, she is going to look and that will be it.  The curse is life.  Life is what kills us, which is entirely true, but the positivity or negativity of that statement depends on your attitude.  Tennyson hands us a life in a heartbeat, gone before you even reaches your destination.  The Lady brings with her the tapestry she has been working on, but to what end? She is evaluated by the crowd at Camelot but she is dead and so will never know what they said.  Is Tennyson making a statement on how he will be remembered, how he will be weighed up at the end of his life? Is Tennyson saying that the curse is life? It is sobering to think of a young man seeing life as a scrabble to shove your achievements in a boat before the end, but that's what it amounts to. To think of life as the Curse that befalls us all makes you consider the state of mind of the poet, and one can only imagine how the death of his friend the same year it was published galvanised this view. To live is to walk towards death and oblivion, or in Tennyson's case, take a boat, it's quicker.

As the poem continues to have a strange resonance with us after all these years, possibly we all feel like that in the end.

Posted by Kirsty Stonell Walker at 12:06