For those that know her photographs, and no doubt all here present, it will come as no surprise that Julia Margaret Cameron seemed to have selected her maids due to their looks rather than their ability.  Even before she took up the art of photography in 1864, Mrs Cameron had taken into her household the two young women, Mary Ryan and Mary Hillier, who would later become her constant models.  In both cases she seemed to delight in the fact that she had employed them for their beauty.  After such an avante-garde beginning to a relationship, it could be believed that Mrs Cameron intended a different life path for her maids than one of domestic servitude but how far did she try and change their stars through her art, and with whom did she have the most success?


Of the two Marys, it would be easy to argue that Mary Ryan was Mrs Cameron’s triumph.  Found begging with her mother on Putney Heath in 1859, 10 year old Mary Ryan’s beauty touched the heart of Mrs Cameron who secured employment for the mother, and took the child into her own home. When the Cameron’s moved to Freshwater, Mrs Ryan remained in London, possibly providing Mrs Cameron with the autonomy to raise Mary Ryan as she saw fit. When the playwright Henry Taylor visited in 1861 he found Mary taking lessons with the Cameron boys.  Although Mary was fond of reading and learning, as Taylor asked ‘What will become of her? If she is to be a servant, I am afraid there is no such thing as a good servant who is fond of reading.’  However Mrs Cameron, being blessed with more hope than reason continued to educate her parlour maid who was reported as ‘rather naughty’, which Taylor inferred was due to the confusion in her place. But still in the 1861 census Mary is listed merely as a servant and in Oscar Rejland’s photographs at Freshwater in 1863 she appears as a maid, cheerful in her work or as an Irish peasant. 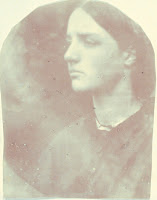 In Mrs Cameron’s own photographs, Mary Ryan appears as a variety of heroines, unmarried beautiful maidens, The May Queen, Juliet, Queen Esther as well as reminders of her roots as in ‘The Irish Immigrant’ and ‘My Beggar Maid, Now 15!’ (left). Her use of ‘beggar maid’ would turn out to be prophetic. Taking Taylor’s assertion that Mrs Cameron saw no contradiction in Mary Ryan’s two states, it is unsurprising that she would aid her ‘Beggar Maid’ in finding a suitable King Cophetua. Rather than hide her parlour maid, Mrs Cameron sent Mary to London to almost be a part of an exhibition of her photographs, to write receipts and give information on the works.  George Price Boyce, water-colourist and keeper of an invaluable dairy noticed her at French’s Gallery in 1865 in the way that George Price Boyce is wont to do with pretty girls. He was not the only one.
﻿
Henry Cotton, a child of the East India Company, like Mrs Cameron, was studying to join the Indian Civil Service when he saw Cordelia kneeling at the feet of King Lear (above). He fell in love.  He bought every image of the beautiful young woman, took her hand-written receipt and kept it in his breast pocket next to his heart. Two years later after graduating, the wildly romantic young man with long hair travelled to Dimbola Lodge in Freshwater and requested the maid’s hand in marriage.  Well, that is the more dramatic and romantic version of the story, as told by Emily Tennyson.  Cotton himself in his autobiography Indian and Home Memories gave a far more prosaic narrative of the meeting. He came across Mary at Little Holland House, which is possible but really just sounds more respectable.  Obviously, Cotton’s version doesn’t mention she was the maid.  Mrs Cameron celebrated this unconventional romance with a series of pictures and the couple were married in Freshwater in 1867.  The poet Laureate, Alfred Tennyson placed a respectable seal on the occasion by lending the happy couple his carriage and his youngest son for the wedding.


An interesting side tale is that the love-blind groom took one look at the bridesmaid Kate Shepherd on his wedding day and announced that he had made a mistake and Kate was actually the model he had fallen in love with, not Mary Ryan. That smacks of poking fun at the whole Pattledom ethos of art and love above all and Mrs Cameron’s own eagerness and considerable effort to ensure a happy ending for her own Beggar Maid and any available King Cophetua.


Mary Ryan lived a life that reflected her mistress, becoming the colonial memsahib, living in India for seven years before returning with her children and living apart from her husband for periods of time.  Her final reward was to become Lady Cotton in 1902, for her husband’s work campaigning for fair treatment and constitutional reforms for plantation workers in Assam where he was Chief Commissioner. When she died in 1914, she had climbed the social ladder and repaid Mrs Cameron’s faith and investment in her.


So what could Mary Hillier do to rival that?  Possibly Mrs Cameron’s best known maid/model, Mary Hillier was similar picked by her employer on her looks.  At 14, she was sent to Dimbola with a message and impressed by her looks, Mrs Cameron offered her a situation as a maid.  For the next 13 years Island Mary provided her employer with assistance both in front and behind the lens. There are descriptions of how Mrs Cameron would show Mary off to her friends using various devices to exhibit her to the best advantage. As recorded by Wilfred Philip Ward in Men and Matters, Mrs Cameron behaved thus: ‘Mary do stand on that chair and pull down that high curtain’.  Then turning to her friend, ‘Isn’t she perfect in that light, and in profile as you see her now?’’ (This really reminded me of the incident when Rossetti pointed out Fanny's beauty in rather florid ones to his friend as Fanny reclined on a couch.  Fanny, unlike Mary, had no fear of telling him to pack it in). Mrs Cameron herself spoke in typically rapturous tones on the beauty of her ‘little maid’ in Annals of My Glasshouse: ‘in every manner of form has her face been reproduced, yet never has it been felt that the grace of the fashion of it has perished.’ Mary sat regularly for images of the Madonna, earning her the nickname ‘Mary Madonna’, her patient expression repeated over and over as she cradled various babies and children in her teenage arms. Her beauty was also recognised by other artists in the Cameron circle. Coutts Lindsay apparently used her for Lady Godiva and G F Watts used her in Fair Daffodils as well as modelling this Madonna scene after her from a photograph given to him by Mrs Cameron.

(I have tried tracing the Coutts Lindsay picture, yet it remains illusive.  However, looking at G F Watts image of Godiva, I am struck by how much the composition resembles Cameron's Queen Esther, so possibly that is what Mary Hillier remembered, or simply that Watts took his composition for Godiva from a Cameron photograph.)
In typical Cameron fashion, ignoring any distinction of rank, Julia Margaret Cameron dressed her maid in the same dress as a lady, making Sappho no different from Lady Ritchie, the same distinctive dress appearing in both.  It was not unusual for Mrs Cameron to drape her subjects with the same paisley shawl or pieces of jewellery, but it is unusual even by her standards to put a titled lady in the same dress as her maid for a straight portrait.

I think it is a mark of affection between mistress and maid that Mary Hillier did not marry until after the Cameron’s returned to Ceylon in 1875. She married Thomas Gilbert, gardener to George Frederick Watts, and lived at Watt’s Freshwater home, The Briary, giving birth to at least two of her children there.  Suitably, her first two children were named after the artists in her life, her daughter Julia and her son George Frederick. In later years, Mary revealed that she detested sitting for the photographs, but was willing to suffer in order to give others the pleasure of photographing her.  This might explain why she refused to be photographed after Mrs Cameron left England, and it was no empty promise.  There is even a sad space in her son George Frederick’s wedding photograph of 1918 where Mary should have been. Bearing in mind that George appears in First World War uniform and by that point in the War, Mary had already lost two other sons in the conflict, her refusal to appear in the image is remarkably poignant.
She lost her eyesight in later life due to cataracts and possibly also the effects of silver nitrate, the photographic solution she spent so much of her early life in contact with. One final image of her exists, a painting of her at 80, by Ida Perrin, as a blind and still beautiful old lady, a celebrity in her corner of the Isle of Wight, well remembered through articles in the Isle of Wight County Press. In her obituary in 1936, it was recalled how G F Watts had referred to her image as ‘Quite Divine’ and how all who knew her loved her.


Each of the maids accomplished something that was a reflection of Julia Margaret Cameron’s photographs.  Mary Ryan shook off her beggar roots and became the Lady, her education not going to waste as Henry Taylor had grimly predicted. She moved from the bottom to almost the top of the Victorian social scale, wife of a peer and an MP, so easily can be seen as the greatest success.  However it is Mary Hillier we return to when we talk about Julia Margaret Cameron, hers is the image that we arguably think of as typifying Mrs Cameron’s art.


It could be argued that through her photographs Julia Margaret Cameron predicted the lives of her maids.  In Mary Ryan she saw a woman whose origins were forgotten in the face of her beauty, whom she referred to as her real life ‘Beggar Maid’ awaiting her King Cophetua, elevated all the way to Lady Cotton, late of the colonies.  Mary Hillier became the mother to many children and beloved Madonna to an entire community who cherished her and her memory. She was their link to the golden years in Freshwater, of Mrs Cameron, Watts, and Tennyson. In Mary Hillier, it is possible that Mrs Cameron in turn saw a cipher for Freshwater, the peace, security and nurturing sought by her circle, who remained golden even after they had gone.

Posted by Kirsty Stonell Walker at 06:14