Turns out my father is Sherlock Holmes.  In many ways I shouldn't have been surprised by this news but within the first few minutes of watching the new film Mr Holmes, I was convinced that Daddy was actually the Victorian era's greatest detective. It was the bees that gave it away... 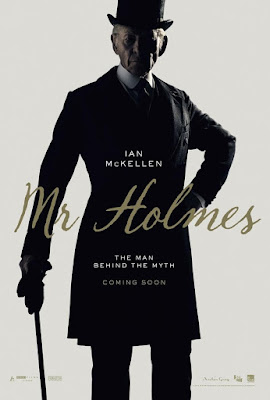 Out at cinemas this week is the adaptation of Mitch Cullin's novel A Slight Trick of the Mind (handily retitled Mr Holmes for people who need to know what it's all about), concerning the old age of Sherlock Holmes as he lives in retirement on the south coast, keeping bees.  He is having problems with his memory as he struggles to remember his last case that caused him to give up detection.  The last case, shown in flashback just after the First World War, concerns a man, his wife and some strange behaviour concerning a glass musical instrument...

Meanwhile in 1947, the elderly and infirm detective is cared for by Mrs Munro (Laura Linney, with a slightly dodgy west country accent) and her son Roger, an inquisitive little boy with a taste for adventure and knowledge.  Holmes attempts various ways to remember what happened with his final case and why his life is the way it is now.

That's all I can really tell you about the plot without giving anything away.  Ian McKellen is astonishing and completely convincing as both a 60 year old and a man in his 90s.  The way Sherlock Holmes is slipped into real life as a real person makes me revert to my child-self where I believed Sherlock Holmes was not fictional (I can still remember the day that my brother had to convince me otherwise.  Worse than finding out about Father Christmas). The moment where Holmes goes to the cinema to watch Basil Rathbone (played by The Young Sherlock Holmes star Nicholas Rowe) play him solving the case he is struggling to remember, is wonderfully self-reflective.

There are beautiful moments of cinematography where Holmes is satisfied about the order of things, reflected in the pattern of the cloisters and the repeating patterns in the park until it all goes wrong.  There is a struggle in his mental health, reflected in the bees (order) and wasps (chaos), the bees perfect combs and twisted mass of the wasp nest.  Will Sherlock and his bees triumph or will the wasps and their chaos overtake it all?

As some of you will know I kept bees a few years back.  My Dad has kept bees for the last 200 years and so honey is in my blood and I appreciated the wonderful way the bees appeared, the way Holmes handled the combs and the gentle care he took of the colonies.  The scene where Holmes lifted the combs with his bare hands reminds me of my Dad who is utterly fearless when it comes to the bees.

If you are hoping for a whodunit or an Arthur Conan Doyle mystery, you're out of luck because it isn't that sort of film.  It's a story about memory, understanding and connection with others. It is packed with stars and filled with questions, not all of which are answered.  There are some beautiful touches and lots of clues which you have to look out for, especially in the three different versions of the same story that Holmes is endeavouring to remember.  What I took away from the film was the necessity of friendship, companionship, understanding and the beauty of order as we get older.  When chaos comes, remember it's not the bees fault.  And also, why would anyone want to live in Portsmouth?

Mr Holmes is out now and the trailer can be seen here:

Posted by Kirsty Stonell Walker at 22:38