Here's the last in my trio of reviews after a particularly jam-packed day in London and it was the exhibition I was looking forward to the most... 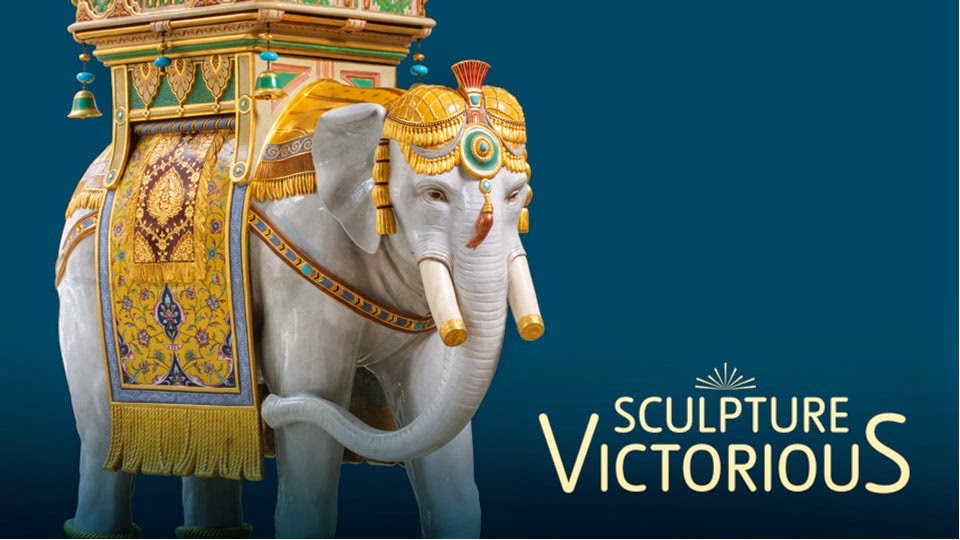 The sculpture was an unexpected highlight of the Tate's Pre-Raphaelite exhibition a couple of years back and I adore seeing sculptures in museums (the Russell-Cotes have some gorgeous pieces).  It's hard to replicate experiencing three-dimensional works of art in a two-dimensional medium and so I was looking forward to getting up close and personal with some good pieces.

The exhibition has had some really bad reviews, but then the Pre-Raphaelite one was slaughtered in the press, so I didn't think too much about it.  However, we went midday on a Saturday and there was only a handful of people in there.  It looked much like this...

Usually I don't like being squashed in with a million other people, shuffling along to see everything, but to be suddenly alone is also not exactly brilliant as you became aware of how little there is in some of the rooms.  The little exhibition booklet we received states 'Sculpture was everywhere during Victoria's reign' - well, I didn't exactly get that impression from the amount on display here...

Saying that, I loved most of the pieces selected and as I said before you cannot beat seeing them in real life.  Special mention has to go to a few pieces, such as A Royal Game showing Elizabeth I and King Philip of Spain playing chess with little ships. Gorgeously detailed and clever, it demonstrates historical sensibilities as well as the scale of vision we associate with the Victorians.

Probably the most astonishing piece in terms of technical expertise has to be the famous Veiled Vestal.  Even looking at it in person it is hard to work out how the thin gauze was created from the solid block.  Your mind so easily trips back to thinking you are looking at a bust wrapped in fabric.  I must have stared at her for ages and goodness knows there wasn't anyone else waiting to move me on.

I have to say it is a wonderful exhibition because it is filled with beautiful objects.  I was always going to love it because I love the subject and it is a special opportunity to walk around the pieces. However our trip was coloured by the fact we were directed to go round the rooms in the wrong order so we ended our visit in (my opinion) the weakest room rather than the Craft and Art room which has the pieces that affected me the most, such as Dame Alice Owen. The contrast in the different materials, so effortlessly combining to make the figure of the seventeenth century founder of a charity school.  She was originally one of the daring 'tinted' pieces produced in the nineteenth century, her hair originally a golden colour.

My main complaint was there were not enough pieces on show, but then I'm guess requesting to borrow a sculpture is a logistical nightmare.  On the plus side, my nine year old daughter was utterly hooked in the exhibition, she wanted to see everything and it was a wonderful exhibition for children, containing many whimsical pieces as well as figures.  However (and this isn't just a problem at this exhibition) some of the cases were too high for her to see into without my holding her up. On the whole I don't have much to add:  it's a nice show and good value for money if you see it in conjunction with Salt and Silver.  The chance to see the pieces I've given special mention to made it utterly worthwhile but I didn't feel as enthused by the show as I expected on the whole. 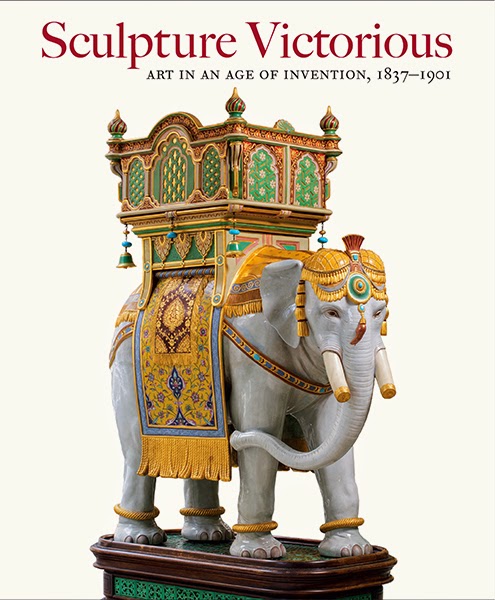 However, in preparation for the exhibition I requested a review copy of the exhibition catalogue and was delighted to receive the massive book in the post. It's not cheap, costing about £45 on Amazon, but you get value for money as it weighs a ton.  It has the depth and beauty that I really wanted from the exhibition, richly illustrated with 150 sculptures catalogued and scores of others in the figures.  Each sculpture is beautifully photographed and has thought-provoking text.  The catalogue made the appreciation of the objects easier, the context and background well-written and fascinating.  A problem with the exhibition was that the labels for the objects were sometimes not on or near the sculptures so we had to go looking for things like the Eglington Trophy information.  Obviously in a book that is not a problem.

It is indeed a lavish book (I do love the word 'lavish'), the illustrations taken from different angles to get around the obvious difficulty in appreciating three-dimensions.  I got a far better sense of a narrative in the 'story' of Victorian sculpture, together with a deeper sense of what the Tate were trying to achieve with their show.  In a way I wish I had received the catalogue before seeing the show as I may have gone in with a better sense of nineteenth century attitudes in this branch of the arts. Reading the catalogue made me want to go back to see the show, appreciating the pieces in a more in-depth way, which is what a good catalogue should do.  It also stands as a damn fine place to start finding out about Victorian sculpture, with a good bibliography, marvellous photography and well-written sections that match the rooms of the show. 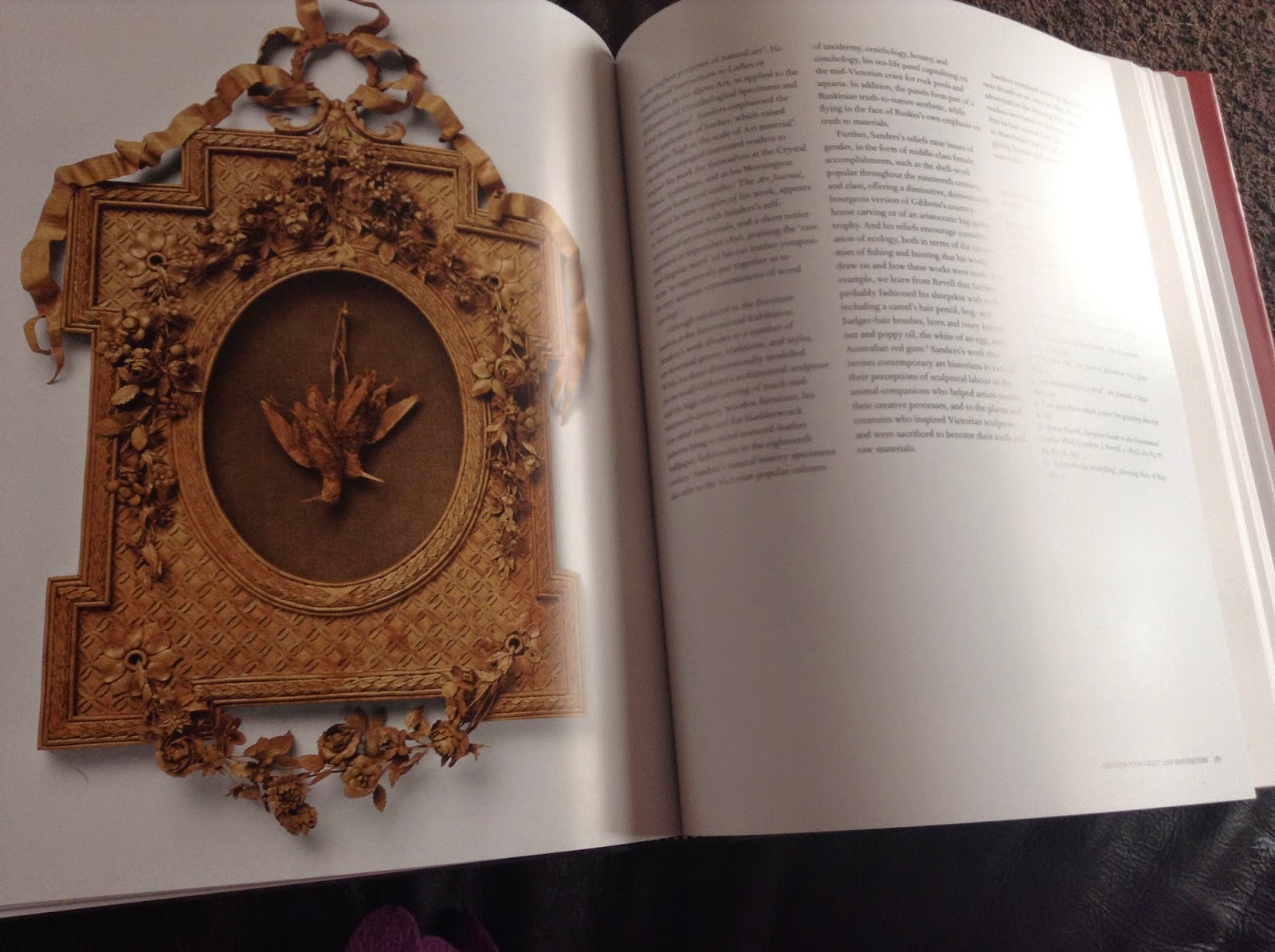 If you have the chance, see the exhibition and get the catalogue; by the end of it you will have a definite idea of how innovative the Victorians were, and how they made such good use of new technologies, yet still reached back in their artistic heritage.

For further details of the exhibition, visit the website here.
For the catalogue, visit Amazon for a cheaper price than the Tate shop (and you won't have to carry it home from London).
Posted by Kirsty Stonell Walker at 13:40