This is the second review from my trip to London, and it is my great pleasure to bring you John Singer Sargent at the National Portrait Gallery! 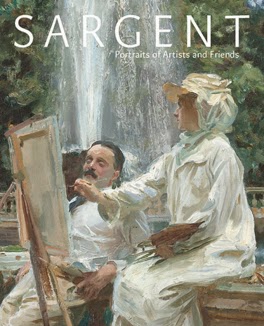 I have never been to a bad exhibition at the NPG, it is a very reliable pair of hands when it comes to crafting small, riveting exhibitions.  The V&A are going have to pull out some stops to beat the NPG's gorgeous Julia Margaret Cameron exhibition.  Anyway, back to Sargent: Portraits of Artists and Friends...

Split over eight rooms, the exhibition shows many important figures in the world of the arts as seen through the unique portraiture of John Singer Sargent.  It is suggested that as he was rarely commissioned to paint formal portraits, choosing instead who he wished to portray, he was able to create works that reached further than mere likenesses to become works of art in their own right. Amalia Subercaseaux, wife of a Chilean diplomat and artist, faces you as you enter the exhibition and sets the standard for exactly how blown away you will be.  The above image does not do justice to how clear the white of her dress is and how the red burst vividly out.  The theme of music in Sargent's work is repeated later, but Amalia used to play while he painted her, the black and white of the instrument echoed in her dress.  The portrait itself was important in terms of his career as it earnt Sargent a second-class medal at the Salon of 1881 which meant he could exhibit at the Salon without having to submit to the jury.

I have to admit to always loving this image as it makes Stevenson look as if he was drawn by Quentin Blake.  This image has such an accidental look to it, like a snapshot, with the scant, rangy form of the author walking away from his wife, barely seen on the periphery. The picture contains tension (Fanny Stevenson doesn't look entirely pleased to be in the picture) and the mystery of the open doorway, bisecting the canvas and creating a bar between husband and wife.  It's odd, informal and modern and a surprising portrait of an author who was growing in fame.

More traditional but no less engaging is Sargent's portrait of his teacher Carolus-Duran. Painted five years into Sargent's time with the charismatic master, it received an honorable mention at the Salon in the same year that Carolus-Duran won the medaille d'honneur.  I love the softness in the paint on the clothes compared to how sharply the eyes are fixed on the audience, really giving you a sense of the power of the teacher's personality and why Sargent held him in such esteem.

Among the portraits are a few of children and special mention has to go to perhaps the creepiest pair of kiddiwinks I have ever seen.  Even Lily-Rose stopped and said 'well, they're not right...' The two poppets are Edouard and Marie-Louise Pailleron.  Marie-Louise became a historian and author when she grew up and recounted no less than 83 sittings for the portrait with battles over hair and dress which might explain why the children look so malevolent.  I have the copy of Turn of the Screw which has this as the cover image, and it is perfect as there are just so many disquietening notes in the picture - the slightly awkward hand positions, the little girl's torque bracelet and her brother's sneering expression.  Marvellously odd.

Far less chilling is this image and predictably this was one I really want our daughter to see.  Lily-Rose informed those around us that it was her picture, which mercifully people found charming.  Mr Walker and I saw this picture back in the 1998 Tate exhibition on Sargent, the day before he got his first museum post and it has always stayed with me.  The effect of the paper lantern-diffused light on the white of the girl's dresses and the petals of the flowers is just magical.  Described as Sargent's brush with Pre-Raphaelitism, I have to say I don't agree unless it is the idea of painting outside and among flowers.  It is a beautiful piece of English Impressionism, with the light and the powdering of flowers through the unruly grass.

It is the portraits of women that were my favourites and two deserve special mention.  Firstly and possibly also predictably, is Ellen Terry as Lady Macbeth, a massive and powerful image of an actress becoming her part with alarming conviction.  Alice Comyn Carr's beetle-wing dress is off-set by the rich red of her hair and the golden crown hovering like a halo over her. Her expression is one of exaltation, fear, power and uncertain control.  I had never considered before that Sargent posed Terry in an act that does not occur in the play but in itself is a hidden theme: how Lady Macbeth's pursuit of the crown is far more vicious and brave than her husband's, how she ultimately wants the crown more, or at least is willing to do what it takes to make it happen.

Finally then I will leave you with my favourite piece in the exhibition. Mabel Batten was a leading patron of the arts and a brilliant mezzo-soprano, also playing the piano and the guitar.  She was the lover of the Prince of Wales among others and wife of the private secretary to the British Viceroy in India and an all-round woman of excitement.  Sargent's portrait of her encompasses many aspects of her personality, as she is superficially shown holding the final note of 'Goodbye' by Paolo Tosti, but the image can easily be seen as a far more intimate, erotic piece.  The cropping of the work to concentrate on her tiny waist, low-cut dress and transported expression hints at a woman in the throes of passion, illuminated by lamplight.  Such a striking and beautiful image was worth the entry fee alone.

If you see one exhibition in London this spring, please make it this one.  It's gorgeous, thrilling and thoroughly enagaging.  I was particularly impressed that the shop boasts not only the expensive catalogue but also a £10 mini-guide with all the images illustrated, together with a brief piece on each.  If you can't make it to the exhibition, the little book is well illustrated and very interesting.  Bravo NPG!

To find out more about Sargent: Portraits of Artists and Friends visit the website here.
Posted by Kirsty Stonell Walker at 12:21