As some of you will know, especially if you click on the tab above that reads 'We Are Villains All', I am writing a book that concerns a photographer in the mid-19th century.  Imagine my delight to read Afterimage by Helen Humphreys, which is about the same subject... 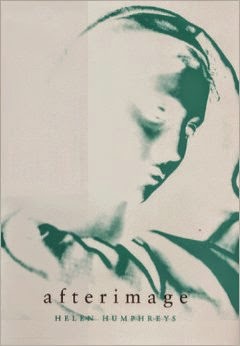 Irish-born maid, Annie Phelan, arrives to work in the house of photographer Isabelle Dashell and her husband, Eldon. The house is unlike any other, with Annie called to model for the photographer, becoming her muse.   The Dashell's marriage has become distant and Eldon sees this new maid as a way to find some comfort in his life.  Annie has to find the truth of herself before the Dashells overwhelm her with their own needs, leading to tragedy...

While it is easy to draw comparisons with Julia Margaret Cameron in Isabelle Dashell, Annie is an amalgam of the two Marys who worked in her household.  The images that Humphreys so beautifully describe and which form the structure of the book, are taken from Mary Hillier, or 'Island Mary' as she was known to discern her from 'Irish Mary', Mary Ryan, later Lady Cotton.

In Annals of My Glass House, Julia Margaret Cameron described Mary Hillier as 'one of the most beautiful and constant of my models, and in every manner of form has her face been reproduced yet never has it been felt that the grace of the fashion of it has perished'.  Cameron had a habit of holding her model maids higher than contemporary society found acceptable, much as Isabelle Dashell presents Annie Phelan as a guest at her dinner party. The tension between how high the photographer holds her maid's beauty as an artist and the maid's place in the household is evident in the novel.

Taken from the points of view of both mistress and maid, often switching between them within a scene, it is easy to feel sympathy with both women who struggle to understand each other while feeling a deep understanding.  For Annie, she has the chance to be more than a maid, to be important to someone for the first time.  For Isabelle, she has a complicated mixture of a friend, a child, and inspiration for her art.


There is a gentleness to the story, a gradual building in tension, like a picture developing, until matters become serious.  I loved the descriptions of how the photographs are staged, how unglamorous the moments are in order to produce something divine.

For me, the most touching moments of the book are between Eldon and Annie, who he adopts as his fellow explorer.  The scene where he wants to experience an arctic exploration by walking in frozen boots is both funny and tragic, and tells you everything you need to know about the man and the tenor of his life. His connection to Annie is equally as tenacious as his wife's, the dinner party scene showing the tension in their attitude to the maid and how at odds it is with the outside world.

Although both Dashells are obsessed with the past, Isabelle with her scenes of classical literature and Eldon with the records of past explorations, both are committed to the future, a future expressed through the personal growth of Annie from maid to educated, opinionated young woman.  Isabelle defends her art against her neighbour, Robert Hill, establishment painter who sees photography as a fad, a threat, the future he doesn't like. Eldon makes maps, first of exploration, then of conquest, of industry and commercialism.

Photography and the fixing of image are very important in the story.  Everyone has the photograph taken by the end, but not all by Isabelle.  Her desire to control everyone's image, including her own, is a keynote for the book, and it is notable who she can't control and what happens to them.

There is an elegance to Humphreys' prose that carries you through the novel.  The characters have terrible stories inside them from Isabelle's babies, Eldon's childhood, the road that claimed Annie's family and what exactly happened to the other maid at her last post, but all attempt to smother the past, leaving it hidden, waiting to be discovered. The story is gentle but compelling, beautiful and sad and as filled with quiet pathos as one of Isabelle Dashell's photographs of Annie Phelan.

I thorough recommend this to any lovers of historical fiction who are after something beautiful to fill your winter nights. To buy it, click here (Amazon UK) or here (USA).
Posted by Kirsty Stonell Walker at 21:15