There are days where my life is a cavalcade of boobs and today is just one such day.  There are painters who can make you smile just by their name because you know you will be cheered up by whatever they have to show you. Are you feeling a bit gloomy on this cold February day? Well, let me whip out my Faleros to cheer you up…
Sounding like a cross between a frozen dessert and that bit of music used by Torvill and Dean, Luis Ricardo Falero was a man who knew what he liked.  He liked alabaster smooth nymphs, celestial bodies, witches and concubines, as long as they had their bosoms out and a backside that would not feel a chill on a winter’s day. I felt I needed to get to know him better…
Born in 1851, in Toledo, Spain, he was apparently the Duke of Labranzano, and was allowed to study watercolouring in London and painting in Paris before being shipped off to pursue a career in the Spanish Navy in 1866.  Against his parent’s wishes, he quit the Navy, walking all the way back to Paris 1868 to return to his studies of art, which he combined with mechanical engineering and chemistry.  The experiments he carried out studying the last two were so life threatening he decided to concentrate on the less fatal occupation of painting. His parents were so angry they refused to fund his studies and so he began to paint portraits to keep himself and moved on to subject paintings, often including astronomy and alchemy which were of great interest to him.


Not only did he produce canvases of these ‘celestial bodies’ but he also illustrated the works of eminent astronomer Camille Flammarion in such works as Uranie and Histoire D’une Comète. 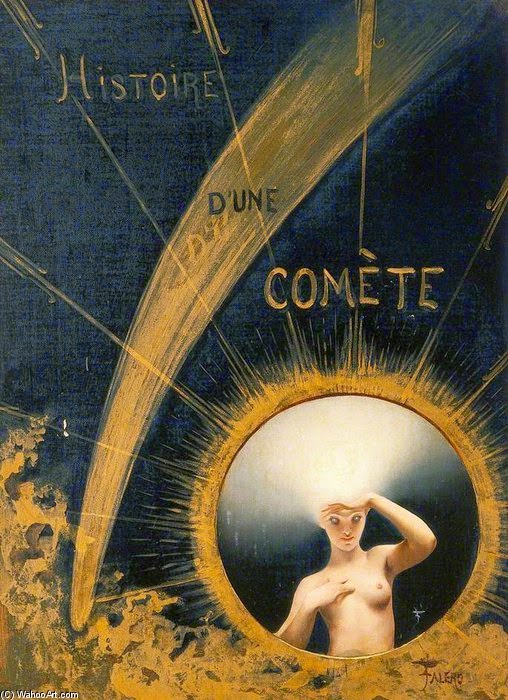 I think what makes his astronomic images so arresting is the paleness of his models in contrast to the pitch of the sky, the flawless expanse of skin against the endless black of the night, these hyper-real pin-ups are perfection made rather lovely flesh.
Even in his pictures of witches and enchantresses, Falero cannot escape the need to make his women creamy and buxom.  The lass above might be up to no good, but isn’t she pretty? However, from this subject came a painting with a difference. Possibly the most astonishing image he ever produced that strayed from this endless landscape of rolling flesh, it is certainly his most arresting…
Almost too excessive in the amount of flesh on display, especially as some of the figures have started to attack each other, clawing and shoving. Look there is even a gentleman present! Lawks amercy! It is not a picture to come across by surprise as there are seventeen shades of ‘What the hell…?’ going on in this image.  Disturbingly erotic doesn’t quite cover it, I think.
In the same vein, although less ‘grabby’ is Faust’s Dream, where the eponymous hero dreams of a tumble of lovely girls while the devil looks on.  It is just this side of decent as there are some well-placed legs and hands to stop you seeing rather more than is good for your morals. I love the way that the girls are holding on to each other and you have to spot the hold, which is sometimes innocent and sometimes less so.
When he moved to London towards the end of the 1880s, he married at Italian woman called Maria Cristina Spinelli, and they lived at 100 Fellows Road in Hampstead, an area seemingly full of artists, according to the 1891 census. He exhibited at the Royal Academy from 1889 to 1893, but The Times review of an exhibition of work in King Street in 1887 observed ‘the sensational nude pictures by which Signor Falero has gained perhaps more popularity than he deserves.’ Ouch.
In 1896, the artist was dragged into court by a young woman called Mary Harvey. The suit alleged that Falero seduced her when she was 17 and his housemaid, who also acted as model. When he discovered she was pregnant, he dismissed her. Miss Harvey won the case and was awarded five shillings per week in support of their child. This did not continue for long because in the December of the same year Falero died at University College Hospital, London, at the age of 45. He left his widow £1139 10s.

The only Falero I have ever had the pleasure of seeing in real life is The Butterfly which hangs on the wall at the Russell-Cotes in Bournemouth.  Mr Walker (Curator/Husband) showed me a delightful letter that the museum received during the Second World War, where an American serviceman visited the museum and admired the picture so much he requested several postcards of the image to lift morale. It is magnificent in real life, the colours radiant and the figure of the very grown up fairy, very clear and vivid.
The thing about Falero is that he is a painter whose work you would not mistake for anyone else’s.  Even when he is attempting the more traditional, exotic subjects, his smooth handling of flesh and love of the voluptuous give his works a rather exciting edge which, as The Times noted, makes the viewer more keen than sense would tell you to be. Easy to file under ‘Guilty Pleasure’, yet he managed to produce one of the most startling and disturbing images of witches possible, and that alone makes me hope that it will not be too long before we see a retrospective of his work.
Although it would need to come with a health warning. I mean, can you imagine the effect of all of that flesh in one place?  Heavens to Betsy!

Posted by Kirsty Stonell Walker at 14:42