I've just built my daughter's new bed and am having a well deserved sit-down before getting the Christmas tree built and dressed.  It's all go this morning, but I'm not as busy as these chaps...

I had to look up what 'sea-coopering' was and even now I'm not entirely clear. Coopering obviously refers to barrels and I was left wondering exactly how you catch a fish in a barrel.  However, I am beginning to suspect that's not fish in that barrel but booze.  Although barrels were used on ships to store fish, I think what these gentleman are 'fishing up' is spirits and tobacco.  Although this seems quite a jolly image, it is smuggling which is not so jolly.  I'm sure this is all perfectly harmless though and they are just getting some brandy for their Christmas dinner and not to sell.  Trusting soul, aren't I?

It reminded me of a story from my home town, Devizes in Wiltshire.  If you were born in Devizes, you were called a 'Moonraker' after a little incident with smuggling. Somewhen in the 18th century, smugglers were bringing barrels of brandy through Wiltshire when they were caught up with by the Excise men in Devizes in the middle of Wiltshire (although other places in Wilthsire claim the story too).  There is a giant pond in the town called the Cramer, so the smugglers dumped the barrels in there.  When they tried to retrieve it later, the Excise men caught them.  The smugglers were holding giant rakes (which they were using to fish out the barrels) and when asked what they were doing they replied they were raking the round cheese off the water (the reflection of the moon).  The Excise men assumed the smugglers were harmless idiots and went away, leaving the smugglers to get their brandy back and scarper.

Having spent some time in Jamaica Inn this summer, the history of smuggling is very unpleasant indeed and not the cuddly, 'Robin Hood' stuff stories and paintings tell us, but you can't help but smile at the fishermen catching brandy instead of fish for Christmas. 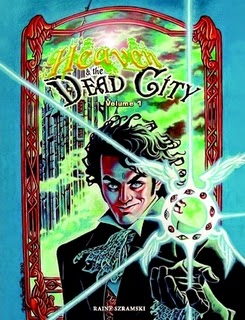 Today's present is the graphic novel Heaven and the Dead City by Raine Szramski.  You will know Raine from her splendid drawings of the Pre-Raphaelites (which you can see on here), and she was kind enough to let me use her drawing of Fanny Cornforth in Stunner.  Heaven and the Dead City is a Victorian adventure of magic and witches, and a cracking good read.  Raine is a brillint writer as well as being a fabulous artist and her work is always entertaining.  I thoroughly recommend!

See you tomorrow for another review and another blogvent.
No peace for the wicked!
Posted by Kirsty Stonell Walker at 15:39