Review: Elizabeth, The Virgin Queen and the Men Who Loved Her

There are a couple of reasons why today's review is such a pleasure.  Firstly, it's the new book by Robert Stephen Parry, author of The Arrow Chest, so I'm happy to start with.  Secondly, and possibly more pertinently, it's a book that explains who the main players in the life of Elizabeth I were.  In some ways, it would seem weird for a Victorianist like me to get excited about Tudor books but then the Victorians were quite excited about the Tudors, and quite rightly so.  If it's good enough for them, it's good enough for me...

In many ways the Elizabethan era and the Victorian era were very similar.  Both were ruled over by a Queen who had an almost mythological status.  One was a Virgin Queen and one an Empress, the mother of half the world.  Both eras are intensely nationalistic, both moved away from Europe towards Empire and expansion overseas.  Outwardly, the Victorians saw Elizabeth I as epitomising female weakness and vices, a vain, childless spinster who reveled in almost masculine behaviours, which was the opposite of Victoria, but something in the Tudor past called to the artists of the nineteenth century.  Romance, drama and the beauty of the period together with the characters from the past provided ample subject matter for Victorian artists.  I am fond of a bit of Elizabethan-ness myself but being a Tudor Tourist I was sometimes at a loss to know who was who and where they fit into the story.  Therefore I was rather delighted to read Elizabeth, The Virgin Queen and the Men Who Loved Her.. 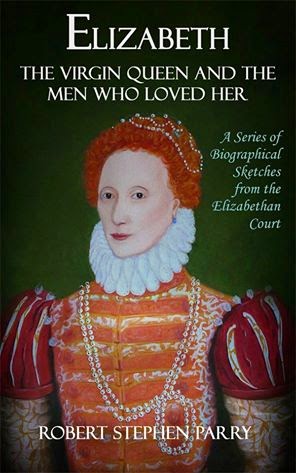 This little book, presented as a series of light-hearted lectures, fills you in on the different men in the life of Elizabeth I, from father figures to friends and lovers.  There is a handy timeline to show you where their influence was felt in the period and a charming Tudor rose rating at the end of each entry.  To give you some idea of exactly what the relationship was like, at the end of each factual description of a player in the court, there is a scene which helps you see precisely how Elizabeth felt about them.

I loved this book because I had only a sketchy knowledge of Elizabethan history, garnered from Tudor-tastic television and film and the occasional lecture from Mr Walker.  I adore that part of the National Portrait Gallery and really wanted to learn more, but there didn't seem to be a handy character guide.  Elizabeth, The Virgin Queen and the Men who Loved Her is concise, understandable without being simplistic and enormously entertaining.  Mr Parry has a gift for making his nonfiction as engaging as his fiction and so you instantly get where people fitted into Elizabeth's social circle.  Each of the relationships also enabled you to understand the Queen a little better through the people she surrounded herself with.

I merrily galloped through The Virgin and The Crab, Mr Parry's debut novel, and this acts as a handy companion piece in many ways, lending a little more non-fiction background to the story.  There are so many fascinating men in Elizabethan history, it was interesting to read about their influence and relationship to the monarch, and in turn her influence over them.

As with all of Mr Parry's works, the descriptions are beautiful and the dialogue well observed.  This should definitely go onto your summer reading list - a pocket sized guide that you will come away from better informed and entertained.  Gorgeous stuff.

To buy Elizabeth, The Virgin Queen and the Men Who Loved Her visit Amazon UK (here) or US (here) or a branch near you.
Posted by Kirsty Stonell Walker at 14:38