Jane and the Wrongs of Women

Once upon a time, it was easy to spot the beautiful women.  They were well off, privileged, possibly royal.  They might be the Queen (who is always beautiful if she was born to be Queen), they might be a Duchess who just happens to be sleeping with the King.  They looked wealthy, plump, clean and disease free.  Nothing boys like more than a girl without pox.

Sleeping with a man of power and not being his wife was a sure fire way of being acclaimed as beautiful.  More often than not marriages were made for any reason but love and attraction, so for a man to be tempted to stray, that woman had to have it going on.  Also, nothing like a hint of 'slutty' to add to your beauty, apparently.  In those days a woman's value was in her purse or relatives not her face.  It probably didn't hurt to be pretty but pretty didn't mean power.  Family, money, land, connections, all of these made you a woman worth looking twice at.  When we look at these women now and read the glowing descriptions of them we accept that they are 'beautiful' without possibly appreciating the way the word is applied, both by their contemporaries and ours.

Roll forward to the Victorian period and behold the power of a severe centre parting...

Victoria set the tone on the female aesthetic. With her round face, smooth shell of shiny hair and diminutive form, she was the model for the ideal Victorian woman, replicated in art such as James Collinson' For Sale...

All women were expected toaspire to a certain type of beauty.  Shiny, small and tight sums up the images we have of these angels of the house, all bound in corsets and with partings so sharp you could cut your finger on them.

Along came the Pre-Raphaelites.  Contemporary with his ever-so conforming portrait of the spaniel haired Mrs Patmore, John Everett Millais unleashed his Ophelia upon a stunned world.  Unlike his painting of Christ in the Carpenter's Shop, the beauty of its female of protagonist was undeniable (and less controversial).  Elizabeth Siddal, found by Walter Deverell and brought to the attention of the world by Millais had shocking red hair, but otherwise was a small, neat little woman with a pretty face and refinement.  Her beloved Rossetti was bohemian and unusual, she was bohemian and unusual, and somehow their unconventional relationship worked with her unconventional looks.  Whatever else Lizzie was, in female aesthtetics she wasn't the most groundbreaking.

That title has to go to a woman who died a hundred years ago today.  Discovered in a theatre in Oxford by the erstwhile Rossetti, she was proclaimed as a beauty when, by her contemporaries standards, she was anything but.
Tall, bony, frizzy haired, striking features and darkish complexion, she looked like a cross between a gypsy and an Amazon.  To a society used to their women shiny and pocket-sized, Jane must have seen like a freak.  Not only that but she was married to a man of wealth and tradition, living and moving within normal society as well as the bohemian art scene.  She became establishment - an usual thread in it, but part of the main tapestry nonetheless.


Skip forward to modern day.  In an article just yesterday Jane was described as 'the famous beauty', but at what point did she become the hallmark of beauty?  I find it interesting that the article that hailed her looks (the number of times the word 'beautiful' is repeated is quite funny) as unquestionably stunning has a sidebar of which unfortunate 'celebrities' look rank or gorgeous on any given day (Madonna: garish, Irina the Russian model: perky).  I begin to wonder if beauty is linked to power once more, or an acceptance of establishment.  While Pre-Raphaelite art is seen as unquestioningly beautiful (if rather low brow and pretty by some) the the women who inhabit the canvases, whatever they look like, are the epitome of beauty.  Whenever I read dismissal or questioning of the status of Pre-Raphaelitism, I notice the criticism is often a thinly veiled attack on the appearance of Jane Morris.  Rossetti's art is spoken of as being large, dark women, improbable, unsettling.  While we love their art, Jane is a beauty.  This leads me to wonder about the nature of our biography of women, both living and dead. 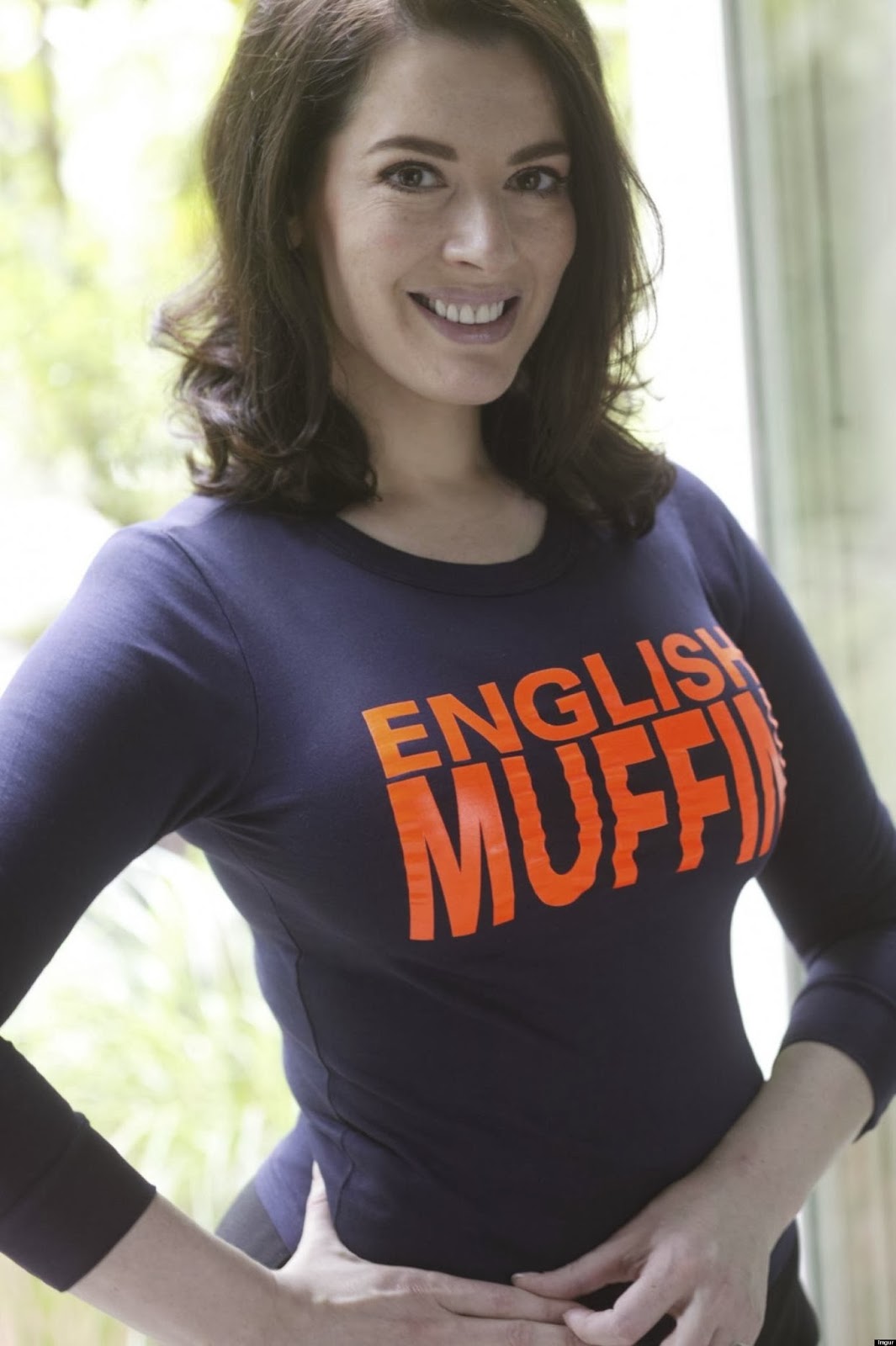 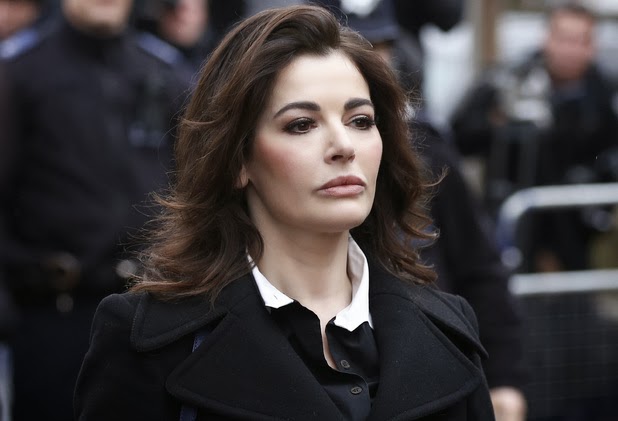 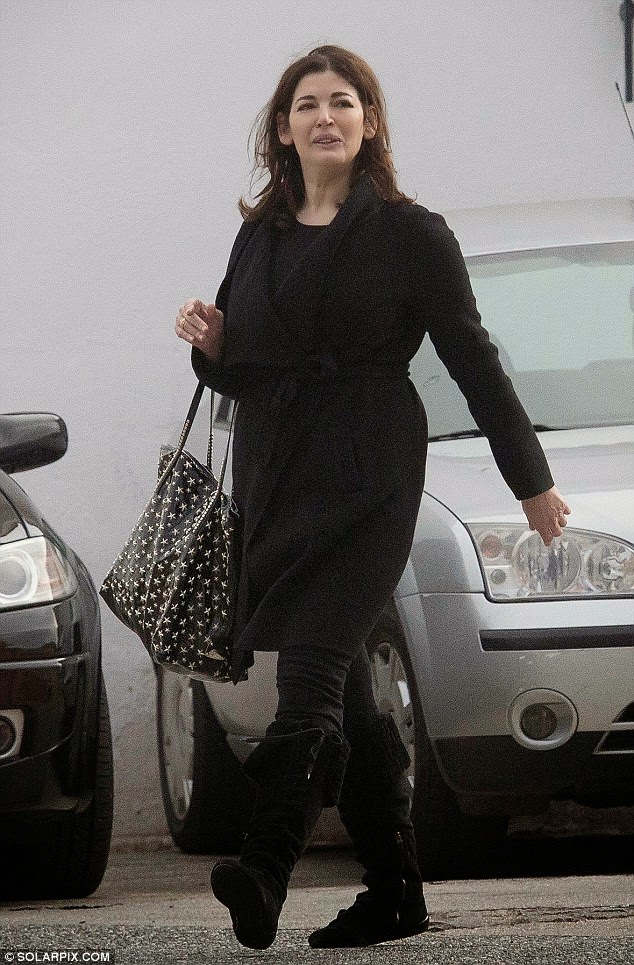 Above is a trio of pictures of another dark-haired lady, one rather more modern.  Top is a picture of the food writer and tv presenter, Nigella Lawson, around the time that she rose to fame with her retro style and witty commentary.  The middle picture is when she appeared at court last autumn to defend herself against a barrage of personal details, and bottom is a picture of her a week ago, on holiday.  Adjectives such as 'saucy' and 'sexy' were applied to the first image, 'severe' and 'regal' going into court, but by the time the fuss had died down she gets 'bloated and 'puffy' applied to her for the last picture.  It doesn't take a genius (but it is beyond the power of the newspapers) to work out that the difference between the first two images and the last is that she definitely set out with the knowledge she would be photographed.  She is her public persona and is glorious.  The last is just her, her private self.  Not only that but her star is not in the ascendant (at least in the media) and so she is no longer beautiful. I am simplifying the matter to save even more rambling on my part but it seems to me that as a woman your beauty never lies in your face.   The consensus think you are popular, you are a beauty.  Your star begins to fall and your beauty vanishes.

It seems to me that Jane Morris highlights two great concerns for the public face of female beauty.  She broke the mould that said you had to be some King's mistress or some heiress to be beautiful.  She was there as the star of Pre-Raphaelitism went into the ascendancy and, by their accolade, she was Beauty.  She paved the way for women of striking and various features to be seen as beautiful and in that way all women can look in the mirror and think 'I am Beauty because Beauty is anyone and everyone.'  This is all well and good but Jane also highlights a rather less pleasant side of this award.  If that star does not climb anymore, if that star you are hitched to should fall, then you too cease your reign.  A woman who was beautiful yesterday because she was successful is 'puffy and bloated' today as she has nothing to offer in terms of 'interest'.  When Pre-Raphaelitism is good, Jane is a beauty, but when it is not, it is criticized for its obsession with large, manly women with big lips and weird hair, in short, Jane's appearance.  Jane reveals to us that  our weights and measures for beauty are never based on the appearance of our face.  The taste of the mob and the size of our (or our husband's) wallet is what is really seen.

Better to be yourself and block your ears.
Posted by Kirsty Stonell Walker at 16:30