Book Review of 'Marriage of Inconvience' by Robert Brownell

I have to admit to a fairly typical curiosity when I heard there would be a new biography about the Ruskin marriage, especially as it promised new information.  Coming hot on the heels (well, actually now preceding it) of the new film about the sorry affair, I really wanted to know what on earth went on.  It's all common knowledge that she was the victim and him the heartless weirdo.  Apparently.  Enter Robert Brownell's new book... 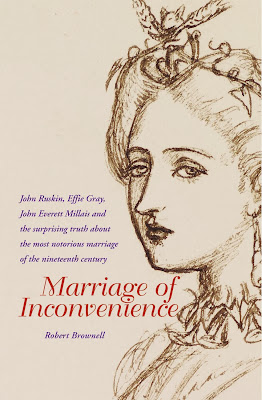 I have previously said that I have doubts about the accepted version of events (I may even be described as Team Ruskin).  I didn't like the way that things were assumed about the man from very little evidence and the words of interested parties.  This rang rather true of my involvement with Fanny Cornforth (that well-known illiterate cockney prostitute) and so have always wanted to know more.  Just the most cursory of fact-checking can dispel the 'fact' that he was a weird old man marrying an innocent child - She was 20, he was 29.  The casting of Greg Wise as Ruskin in the new film makes me cover my eyes in horror.  As gorgeous as Mr Wise is, he is a gentleman in his late 40s, almost 20 years older than the man he's playing and he looks like they have added a few more years too with his make up.  Imagine the difference in casting someone like Rupert Friend or Orlando Bloom (actually both too old, how about Robert Pattinson?  He's 28, so near enough.  R-Patz for Ruskin!  Lawks, imagine that cinema queue...), someone younger, nearer Effie's age, that would even the stakes a little.  In fact, that's the point of the book.  Imagine if Ruskin wasn't the worldly man of age, imagine he was just a romantic idiot.  What then?

I won't give away too much because I really want you to read the book but I will tell you this: Philip Larkin was right when he said 'They f- you up, your mum and dad'.  What a sorry mess.  It is wise to take all biography as being biased, but, my Lord, it is hard to see the good side of the behaviour of Mr and Mrs Ruskin and Mr and Mrs Gray.  One side seem to be scheming, the other side, over-protective idiots.  Money, money, everything flowing back to money.  If anything I wanted to slap a great many people, including Ruskin, for not seeing exactly how awful people can be when they are desperate.  The Ruskins didn't want their son to die of a tubercular broken heart, the Grays wanted their pretty, flirty daughter to keep them out of the poor house.  No-one asked too many questions and a lot of people complained that they didn't get a fair share of what wasn't theirs to start with.


Things I didn't know were that Millais and Effie knew each other before her marriage and that the Ruskins had some sort of agreement that they would abstain from sex until Effie's 25th birthday (because Ruskin wanted to complete his books and didn't want babies all over the place).  It would be easy to look on Effie as a little bit less than the innocent victim, due to her behaviour with all her many admirers, but then you could understand her seeking attention elsewhere is she wasn't getting it at home.  I found her rather callous attitude to the news that duels had been fought over her when they travelled abroad to be disconcerting, but I think it typifies her silliness, how utterly remote from real life she was, they both were.  That brings me to the wedding night...

I can never decide if it's a modern obsession or if it's eternal to wonder why John Ruskin did not consummate his marriage.  We seem to automatically take it as a big flashing sign of his weirdness.  It shapes our opinion of him.  It almost doesn't matter why he didn't, although in my time I have heard the following reasons - he didn't like body hair, she was having her period, he was gay, he liked little girls, and so on.  I had never heard that they had an agreement.  I have to admit it makes sense if the idea was to ensure there were no babies and they weren't the only ones.  Mind you, Brownell goes further and brings forth the piece of evidence that usually backs up the idea that Ruskin was a weirdo.  In a letter to her father in 1854, Effie revealed that Ruskin told her that 'he had imagined women were quite different to what he saw I was, and that the reason he did not make me his Wife was that he was disgusted with my person the first evening 10th April.'  That is usually taken to mean that Ruskin thought Effie would look like a marble statue, that her body hair (gasp!) was so repellent that he could not bring himself to look at her.  Taking this statement as fact, what if Ruskin used the word 'person' to mean not the body, but the personality.  Read the book before you judge him for this horrible statement because after 535 pages, I'm not wild about any of their persons either.

So now we wait for the film which is due in the Spring.  I would very much urge you to read the book beforehand because I am guessing from the casting that Mr Wise's grey sideburns will mean he is playing old Ruskin rather than hot Ruskin.  Not that I don't think old Ruskin was hot.  Oh dear, I better move on.  Make your own mind up and as always, my dear friends, question everything that is assumed.

Marriage of Inconvenience can be purchased here (UK) or at your local bookshop.
Posted by Kirsty Stonell Walker at 13:27