Happy Birthday Dante Gabriel Rossetti!  It only seems five minutes ago that you were a baby, but 185 years later you're all grown up, so I think it's about time we had a look at the many faces of the artist we know and love...

This is reportedly the first portrait of Rossetti as a teenager, drawn in Boulogne by the son of the family whom Rossetti was staying with.  William Michael regarded it as little more than a caricature of his brother but admitted that it was still like him.  While it is completely unlike all portraits that followed, it is possible to discern the large Disney eyes and the pouty lips.  He certainly looks far more Mediterranean than in any of his own portraits or those by his friends.  How interesting that he seemed to have found his romantic groove by 1845...

Well, he grew his hair out for the medallion, and this image gives some credence to everyone's favourite portrait of Rossetti.  Brace yourself, the screaming is about to start....


He's late teens and looking as hot as York in August.  All the girls love this image of the revolutionary artist, forming the brotherhood and working on his smolder.  Look at the faint shadow forming on the bridge of his nose between his eyebrows.  That deepens as the years pass, but in 1848 he was looking beardless and gorgeous.

Millais is an artist who spoke the truth, especially in his sketches, so in the detail sketch on the right, you have a very honest image of the young, flowing-haired man, not completely removed from the very romantic self-portrait.  It's possible to discern the curl of his hair on his forehead.  I think I better have a bit of a sit down.

What a difference a year makes.  By 1849, Rossetti has started morphing into a more familiar figure.  Bearded, slightly unkempt and looking strangely haunted due to the emphasis on the large eyes, Rossetti appears to be whippet-thin and has had his lovely long locks all cut.  What a shame.

As if you needed concrete proof that by the early 1850s, DGR was not the fabulous-haired cupcake he had been in his late teens, here is a photo from 1853.  The brothers look like stray members of a Prog Rock group on a particularly arty concept album cover.  He should not have been allowed to stand with his hands on his hips, it's not a good look.  Anyway, despite being rather foggy, that outline, the profile, is unmistakable.

We don't need to squint through the fog, Holman Hunt conveniently did a portrait the same year.  The crease on the bridge of his nose is missing, but those enormous eyes glimmer with the sort of intrigue and naughtiness that should make a lady grasp her sixpence.

It is then almost ten years until the next clear image of Rossetti is taken, this time in photo form, where nothing can be glammed up, airbrushed or faked.  If you had no notion of what had occurred in the years between 1853 and 1862, surely the look on his face would tell you something devastating had happened...

A mere ten months after the death of his wife and their unborn child and Rossetti faces a camera.  Put in that context, this just breaks my heart.  He looks like his coat: he is holding it all together, but he is slowly coming undone.


A year later, and he had settled into Cheyne Walk with a vengeance   The series of photographs taken by Charles Lutwidge Dodgson (better known as Lewis Carroll), show Rossetti of the Middle Years, plump and vaguely dapper.  I don't think it is even vaguely ironic that he is pictured playing games with his family.


The formality and control appears to have returned to Rossetti in this very self-aware portrait.  He looks like someone has actually pressed his clothes for a change.  Comparing the image to the year before, you can see how much he has pulled himself back in.  He is neat, he is ready and he knows people are looking.


In between those two images lies this series of oddities.  Really, I don't know where to start with how peculiar this now appears.  No, Bell Scott, no-one wants to hold your hand, you horrible man.  Mind you, Rossetti just got further with Ruskin than Effie did. Moving on.

The portraits then become quite same-y for a period.  His neatly shaved beard and tidy little suits don't seem to differ even though we know that he went through some appalling emotional upheavals during this period.  Looking at his self-portrait in 1870, it's hard to imagine this was a man on the brink of a series of appalling breakdowns after the disturbance of his wife's grave.

Interestingly, this portrait from the same time by someone else shows a slightly less chipper little fellow.  Rossetti didn't like this picture and quickly handed it over to Fanny for her 'Elephant's Hole' of pictures.  I agree, I don't like it much either, I find the head to be rather 'skull-like' and that wavy hair is not in evidence. Everything looks ghost-like and haunted all at once.

The few lines of this pencil portrait give a very clear picture of the painter towards the end of his life.  He looks unravelled, transient, but those large eyes and that line between them catch you as everything else is barely rendered.

Curious one this, not sure if I believe it is Rossetti, but as we have very little to compare it to, apart from the sketch above, it's hard to call either way.  He looks peculiar in the image but then, he was peculiar at this point, having broken with Jane Morris and tumbling into the last troubled years of his life.

The end came all too soon and despite his wishes not to be recorded in death, both 2- and 3-dimensional renderings were taken.

Thinking about the rights and wrongs of the situation, it's hard to accept that my own wishes to see an actual cast of Rossetti's face overrides the man's wishes.  I find it all rather heartless, but yet another example of how his family owned him because he gave up control to them too readily.

In my opinion the worst portrait of Rossetti is the memorial by Ford Madox Brown where he resembles a Panto Shakespeare... 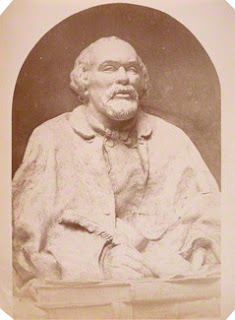 So there it should end, but just as Rossetti's fame cause his dead body to be recorded, then too, his likeness rose again with the advent of film and television.  You want your Rossetti alive again?  Well, how about this...

In my humble opinion, Oliver Reed makes such an outstanding Rossetti that no-one else should have bothered.  Despite bringing a certain level of hotness to the role, he also brought the charisma.  He made you feel irritation, pity and happiness, plus he oozed utter madness.  The film is bonkers but I like it because it has courage of its bonkers convictions.

Beautifully displaying the youthful enthusiasm of the young Rossetti is Ben Kingsley, a brilliant actor even on his off days.  I want to see more than just the snippet on YouTube, BBC, release this soon!

Arguably the portrayal Rossetti would have liked the best has to be Mr Turner's hot gitweasel because Rossetti was a vain man and Aidan Turner is an exceptionally handsome man.  However, the characterization of Rossetti bore as much relevance to the internal machinations of the man himself as Brown's plaster bust resembled the outside.  This does him no service and is poor thanks for the beautiful art he gave the world.  Shame on you BBC.

His life was lived in the public eye, reflected and captured in art from his teenage years onwards.  As Rossetti created image from others, he too was flattened and caught on canvas and plate.  We see him in hope and expectation, we see him in despair, we see him as he cannot see himself and through all of it he stands before us, not shielded by his canvas, not armed with his brush, but waiting for us in a moment that is gone in an instant but will exist forever, a candle that can never be blown out.


Posted by Kirsty Stonell Walker at 07:38