Review: Jane Morris: The Burden of History by Wendy Parkins

I rarely think of Rossetti and common sense in the same moment, but this sums up exactly my feelings towards modern trends of biography:

'if Byron f-ed his sister, he f-ed his sister and there's an end, - an absolute end, in my opinion, as far as the vital interest of his poetry goes, which is all we have to do with.' (Letter dated 15 September 1869)

Quite so, Rossetti, and this in some ways is a keynote of the new book on Jane Morris, Jane Morris: The Burden of History by Wendy Parkins and published by Edinburgh University Press.  Instead of being a straight biography, this book attempts a rather more novel approach to Jane Morris, examining what others have said about her and whether being fixated on who she 'f-ed' is ever enough in evaluating the life of a silent woman.

One of the thrusts of the book is how we as art explorers approach our subjects, especially if our subjects are women.  Being a nineteenth century woman is fraught with trouble, even the simplest matter such as name can be heavy with meaning.  Parkins spends a worthwhile and interesting passage discussing her issues in choosing what to call the object of her attention. Is it 'Jane' or 'Janey', or even more properly 'Morris', as you would use when talking about her husband.  Isn't it rather presumptive and familiar to use first names, in some way trivialising the subject which we would never do with a man.  Then there is the problem arising by calling her 'Jane Morris' when we more usually refer to 'Elizabeth Siddal' rather than 'Elizabeth Rossetti'. Why not then 'Jane Burden'? That's before we've even started...

May I just say that I have never used the word 'trope' so often as I have over the last few days while discussing this book in the Walker household.  In case you didn't know what a 'trope' was, it is a common or overused theme or device, sort of like a stereotype. Tropes seem to be hot right now, so you'll probably hear that word a lot.  Anyway, there is much discussion of Jane Morris fulfilling the tropes of femme fatale and of Victorian female invalid and how these easy shorthands have come to define her within a little pigeonhole that does her a disservice.  One of the joys of this books is that Parkins points out when an assumption is being made (a trope alarm goes off) and how most of the time these constructions of Jane's character are entirely without basis in fact.  If ever a woman was built on the whimsied eye of the prejudiced audience, it has to be Jane.

Well, I can't go much further without exclaiming in delight about the pleasure in seeing Wilfrid Scawen Blunt's diaries examined for the self-stroking pile of narcissistic flim-flam they were (I've just spent a good few minutes debating the exchange of the word 'narcissistic' for the one I originally wanted to use, which was a great deal ruder and rhymed with his name). Blunt is a prime example of projection, very obviously exhibited.  His love affair with Rossetti colours the romance he feels for Jane (and for Marie Stillman, who seems to have had the sense to hold him a little removed, only removing a glove for him) and Parkins shows Blunt's swirling descriptions of his creepy adoration together with Jane's puzzlement at why he would describe her as melancholic, tragic or mystic. 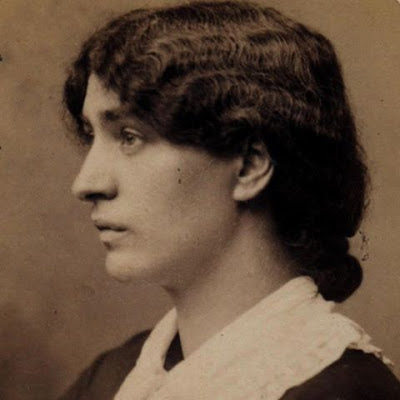 The book is split into five sections: Scandal, Silence, Class, Icon and Home.  In Scandal, Parkins considers Jane and Rossetti, and Jane and Blunt.  Both self-consciously painted pictures of her for the public, one with paint and one with words.  Jane's character tended to be constructed through portraits by others without any consideration that the portraits of Jane say more about the painters than the model.  Similarly in the chapter entitled 'Silence' we experience Jane through a cavalcade of reporters.  Henry James, for example, describes her as a wonder 'who haunts me still'.  To take it to its most absurd heights, even when presenting her guest, Richard Le Gallienne, with a jar of jam, he describes Jane as The Blessed Damozel or Helen of Troy.  If that isn't projection of image, I don't know what is and it is arguably her silence, either by design or dint of her gender that rendered her at the mercy of such fanciful narrators. 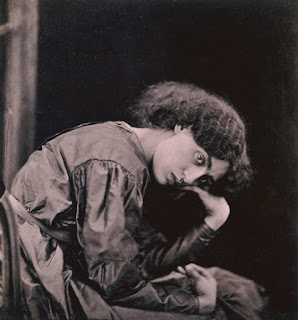 I had never considered Jane in relation to her class, unlike Fanny who was always firmly held down in the class where she started, despite her fiscal and social mobility.  Jane is described as having shame in her origins and this is often interpreted as class-orientated by those commentator who judge things via class.  While it is true that Jane resisted retellings of her roots or pictures of her family home being included in any biography of her husband, she never elaborated her reasoning, or at least her reasons have been lost.  Again, her blanks are there to be filled by us, pouring in our own opinions as we fill in the words in her blank speech bubbles.

I especially enjoyed the discussion of Jane as 'Icon'.  I feel as an art historian, it is the easiest trap for me to fall into, believing that the Jane that inhabits Rossetti's works is the real woman.  The problems lie in the fact that they look so alike, but that would be as stupid as to believe an actor is a part he plays just because they look the same.  Take these two pictures... 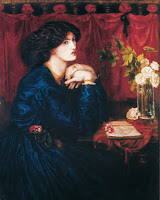 One of these women is the sad, unloved wife, but the problem is that they both look the same, so how are we to tell which is which?  It is easy to confuse Jane for the Icon and is useful to have that reality exposed.  Jane and Lizzie are especially vulnerable to this, in the attempts of others (and possibly themselves) to conform to a more aesthetic ideal.  To a lesser extent Fanny is often mistaken for the more earthy good-time girls of Rossetti's early 1860s period, but she never exuded the silent stillness of the Rossetti muse in real life.

In Home, Parkins examines how Jane is placed within the appropriate Victorian female sphere of the Home, how she created the beautiful embroidery in that setting and how the majority of her commentators experienced her within the domestic scene, and how all of that in itself built a narrative of her.  Much of the description of Jane is external, very little actual fact is spoken about her character.  When picked apart it is fascinating to see how many stories and descriptions of Jane are entirely concerned with her appearance rather than any description of her actions, her words or her personality.  In fact, the preference of the biographer seemed to be to watch her from a distance, self-affirming the tropes that bound together to make the woman.  Were people frightened of her?  Were people frightened to find out that she was not the goddess that walked among them but a normal woman?  Possibly each biographer wished Jane to be what they made of her, but it seems that it is not for her benefit they read her.  Jane is thus because it means that her lover is thus.  Maybe Blunt wasn't far off the mark when he slept with Jane Morris to get closer to Rossetti.  Lord knows it seems that most other commentator were also making the same mistake. 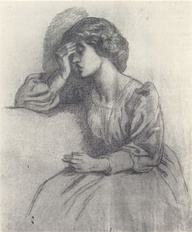 Jane said 'Why should there by any special record of me when I have never done any special work?', but record of her there has been, in vast array.  Jane as goddess, Jane as deceiver, Jane as malevolent presence, the silent spectre of her own portrait, fading and aging as the audience push to get a better view from a safe distance.  Rossetti's view of Jane is problematic as so little of their actual contact remains beyond his fictional portrayals of his muse.  I did not realise that he called her 'Moocow' which now makes me wonder about all the emphasis that is placed on his naming of Fanny as 'Elephant'.  No particular interest has been shown on a nickname that likens Jane to a cow, but then it does not fit with our narrative of Jane. 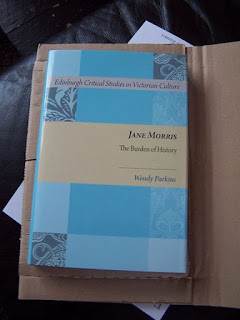 Yes, the book is expensive at £70, but that's why Jesus gave us libraries and anyone who wishes to understand Stunners will appreciate this angle of investigation.  It may not tell you anything you didn't know but I guarantee it will make you consider all that you know in a new light.  If Parkins book does anything, it makes you appreciate the sad truth that the majority we 'know' about Jane tends to be based on the surface, as if the record was of a painting rather than the woman.

We should never stop questioning anything.
Posted by Kirsty Stonell Walker at 22:17