Welcome back, and well done for sticking with what has been a bit grim, I'm grateful for the company.  It was all a little bit odd and tawdry yesterday, so where does that leave us?  Can we ever look at a picture of a Victorian child without feeling suspicion?  What was going on with all those Victorian chaps?

I know I often give the appearance of falling against my keyboard and accidentally posting nonsense, but this series of blogs has been in the pipeline for a while.  At Christmas I read a fabulous book entitled Men in Wonderland which informed a lot of my thinking about the defence of the otherwise indefensible, and managed to change my thinking on what was going on behind those all too familiar images.  It reinforced for me the idea that in many ways we have to learn how to see Victorian pictures through their eyes, and it is possible that just because it's a recognisable image (i.e. that of a child) it doesn't mean that we completely understand what we are viewing or should judge using our morals and prejudices.

I wanted to show some images of girls that I am quite relaxed with, that I would gladly have on my wall.  I'll start with Ford Madox Brown and The Irish Girl (1860). 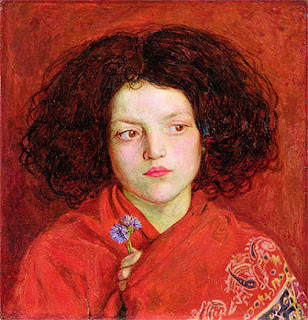 It's tonally gorgeous and beautiful, her dark hair contrasting with her pale skin and the vivid red.  There seems to be nothing exploitative or suggestive about the image, it's both powerful and innocent.  This is in contrast to Mauvais Sujet (1863). 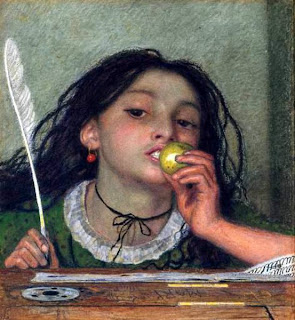 Oh dear, where to start.  Is it the apple, or the ribbon?  Maybe its the red earring, but this is a bad girl.  Her name may be 'Mary' (as graffitied on the desk) but I get a terrible suspicion that we won't be prefixing that with'Virgin'.  You can say that it is an honest portrayal of precocious teenage sexuality, a precursor to Lolita, or you can say 'Ford!  Really!'  I still like The Irish Girl, it's far more dignified.

Okay, while I'm in the realm of the wrong, let me just share this with you....

We do actually own a print involving children, it's very special to us indeed at Chez Walker...


We liked this picture so much our daughter is named for it.  The use of the light source, the dark and white, it's an exquisite picture, just this side of well-known.  We saw it at the Tate's Sargent exhibition in the late 90s and I have loved it ever since.  May I just clarify that my daughter's name is 'Lily-Rose' not 'Carnation-Lily-Lily-Rose'.  That would border on child abuse...

See it is possible to not stray into weirdness (or dog whips) when picturing little girls.  I turn to my good friend Rossetti for further inspiration...

Without context or comment, this is a beautiful chalk portrait of Jane Alice (Jenny) Morris.  It is beautiful without being anything else, it's not whimsical, cute or inappropriately sexy, just an image of quiet gentleness.  This is quite a triumph if you think about it, as unlike family groups, it is when the girls are pictured alone then we tend to stray into the realms of wrong or weird.  I'm not going to repost Cherry Ripe here as I don't want to encourage Millais, but the use of ripe fruit to symbolise the child's 'ripeness' (yuck) is wide-spread and makes me want to bathe in disinfectant.  Cherry Ripe is the least of our problems, there are far more worrying variations.  And don't get me started on apples.  Yes, Ford Madox Brown, I'm looking at you.  Shame on you.

It is a marvellous image of a teenage girl sniffing a big showy flower, unaware that the perfume is coming from the little violets in her hand.  Okay, so it's a comment on Watt's marriage, that he felt his child-bride was more interested in glamour rather than substance, but we all could have told him how that would end.  Plus, he married Ellen Terry, known for her drama. Maybe before marrying her, Watts should have asked his bride what she wanted to be when she grew up. Never mind, they were both happy in the end, and it is a rather touching image of childish fickleness (which is why we shouldn't marry them, Watts, my dear chap).

So, imagine me at Christmas, thinking about these posts, and I thought about Julia Margaret Cameron.  I love her pictures of children, they are beautiful and imaginative, but also as straightforward as a photograph can be.  Take Annie, My First Success of 1864... 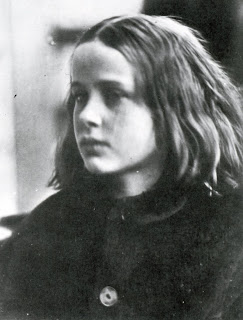 It's marvellously modern, like many of Cameron's works it would be hard to date it because this could easily be a child from the 1930s or even 1960s.  This got me thinking, and I am one to put my money where my mouth is, so together with Miss Lily-Rose Walker, I began to plan our own interpretation of the Victorian child aesthetic.  I think my favourite Cameron image is Call, I follow, I follow, let me die! from 1867... 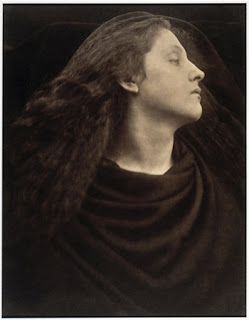 With this in mind, Miss Walker and I put on our very best Pre-Raphaelite expressions and I took some photographs.  The result is this...


I think what I've gained from researching these posts is that sometimes it's all too easy to apply our prejudice to the past.  It is undeniable that knowledge/hysteria about the threat of paedophiles has never been as rampant as it is now, and in our legitimate quest to protect our children from any threat we tend to perceive it where possibly it isn't.  Arguably, this is one of those subjects where we cannot allow grey areas to exist, it's just too risky, but in this rush to protect, we might be throwing out the 'art' with the 'porn'.  Mind you, Victorian child art is under no threat of extinction.  Check out the marvellous 'I am a Child' blog for more pictures than you can shake a dog whip at.  It seems a shame that the phrase 'Victorian Child Art' has only two connotations, granny jigsaw or porn (blimey, who'd put those together?  I guess it depends on your granny...) and so it's time to celebrate the finer aesthetic.  For ever In Disgrace (and God knows there are lots of them...) there is The Irish Girl or Choosing, for every The New Whip there is Jenny Morris.  It's time that girls in Victorian art were given the respect that they deserve. 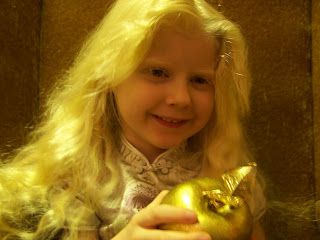 Posted by Kirsty Stonell Walker at 21:41