From Obsession Comes Results or Alexa Yet Again

Really, this will probably be the last Alexa Wilding post for a goodly while, I promise.  As mentioned by Clara at the end of my previous Alexa post, there is a very illuminating Appendix in the new collected letters of Rossetti (and also available here for free), which I read as part of my endless, endless research into Alexa's life.  Now, I must admit the worst thing about writing non-fiction (and a huge reason why I really don't want to write another full length biography) is when you do loads of research and then find someone else has published first.  However, this is me and I still have a trick up my sleeve.

Okay, friends, here we go...as I suggested in my earlier post on Alexa, there is the small confused matter of her two children in the 1881 census, but we now all agree that they are Alexa's kids.  I managed to turn up the birth certificate for Charles, her eldest, via Ancestry (God, I love Ancestry) and she is down as 'Alexa' rather than 'Alice'.  So, naughty Alexa did have her kiddiwinks out of wedlock, while living a rather nice life in South Kensington.  Neither child was buried with her, and according to the Appendix, Charles and possibly also Nellie (or Eleanor) emigrated to South Africa.  As Fanny's step-son Cecil also went to South Africa, I begin to wonder if it is compulsory for children of Stunners to clear off to South Africa...

Also, and most excitingly for me, the Appendix contains a nice new photo of Alexa!  You may remember I have shown the following couple before...


Now, I didn't realise that the picture on the right was from 1866, which would make Alexa about 19 at the time.  In the Appendix, there is an expanded version of the 1875 picture, which shows you the rest of Alexa's dress... 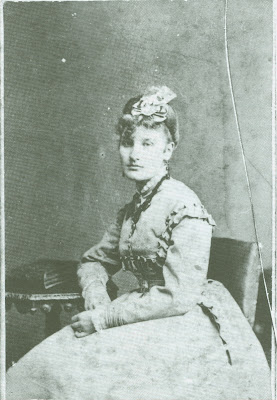 It's all quite frilly, but it does show Alexa in her late 20s, and she does look like a very beautiful young woman.  The new picture that the book contains is as follows....

Now, this is a sister-image to the other 1866 portrait, but shows her full-on.  It's not an overwhelmingly flattering shot, but does show a rather relaxed looking Stunner, waiting for life to happen to her.  Her hair is smoothed back, parted down the centre and caught in a net behind.  Compare this to the 1875 image with her fluffy hair, all secured in a ball on the top.  Alexa in 1875 looks like she's had a bit of life happen to her and she's lost the rather arch expression of her previous portrait.  One explanation of this is given in the Appendix, that possibly she was the lover of G E Shelley, gun-loving, bird-watching playboy and Victorian cliche.  He is allegedly the father of her children, rather than the 'fictional' Charles Wilding, travelling salesman, who is listed on Charles and Nellie's birth certificates, and as 'householder' of Alexa's house in the records.  While it is indisputable that Shelley knew Alexa and was intimate enough with her to be present when she died, I'm not sure if more can be stated for certain, and I do like to be for certain because otherwise it's tempting to hurry down the route of a good story, rather than fact, and that road leads to nut-slinging illiterate tarts.

To add to the facts of Alexa's life I do have a new piece, previously (I hope, and as far as I know) unpublished...

When Rossetti discovered Alexa in the street in 1865, I doubt he quite realised how she would rescue his finances.  However, rapidly Alexa became the object of Rossetti's vision, appearing repeatedly in 1866 and early 1867, in Regina Cordium, Monna Vanna, Lady Lilith, Sibylla Palmifera and other works, earning him money and causing him to pay her a regular wage in order to secure her services.  He allowed her to sit for two other people: his studio assistant Henry Treffry-Dunn and George Price Boyce, both of whom were somewhat besotted by her.  However in February 1868, Rossetti bemoaned Alexa's disappearance in a letter to Boyce: 'I fear you may fail in finishing Miss W's head after all, as that young person has gone out of town for some time as I understand - an inconvenience to me...' (letter to George Boyce, 10 February 1868).  Rossetti used other models during 1867 and 1868 until Alexa reappeared in late 1868/69.  Jane Morris began to dominate the canvases, along with Ellen Smith and even a couple of portraits of Fanny.  It has been suggested that Alexa, only 21 at the time had gone off on some love affair or just been flaky and unreliable.  On the contrary, Alexa was not only in town but had a good reason for not appearing in the studio.  She was heavily pregnant.

Unlike her subsequent children, there is no pretence of a husband or a father on the baptism certificate.  Alexa's name alone (as 'Alexa Wilding') appears, alongside her daughter's when Maria was baptised at Trinity Church, Marylebone, in September of 1868.  She is listed as living in Bywater Street, Chelsea (just round the corner from Fanny Cornforth at Royal Avenue and Rossetti at Cheyne Walk), no longer living in her Newgate Market home with her Grandma and her Uncles.  I wonder if Maria was named for her Great-Grandma, Mary, but in any case Maria vanishes from the records and is not heard of after that (not that she was heard of before).  What happened to baby Maria?  Was she adopted?  Did she die?  Did anyone know that Alexa had given birth?  The tone of Rossetti's letter is peevish and sulky, not like he knew his model was in trouble.  The Appendix suggests that Alexa may have made the acquaintance of G E Shelley in 1870, but that the love affair was unlikely to have started until mid 1870s because Alexa had been too busy modelling.  That counts double for the period 1866 to early 1867, the only people she spent time with seem to have been the artists, especially Rossetti and Boyce.

Now, isn't that something to consider...?
Posted by Kirsty Stonell Walker at 16:36