You know me, I like a challenge as much as I like a good painting.  A combination of these two marvellous things has arisen this week, just by chance.
Picture me, sat on my sofa at home, assisting Mr Walker with the research for a piece he is writing on the lovely TM Rooke.  I am idly flicking through the Public Catalogue Foundation catalogue for and I spy a very lovely picture indeed that is in the Russell-Cotes collection.  On enquiring, I discover that it sadly cannot be displayed at present as it urgently needs conservation work and is in a queue for raising funds.
‘What do we know of the artist?’ I asked, and Mr Walker gave a considered look and replied it wasn’t a familiar name.  ‘Aha!’ I cried, ‘I shall find out more!’
The artist in question is May Louise Greville Cooksey, and this is what I have found out.
This is the picture I spied in the PCF catalogue for …

I was struck by it as it reminded me of the very well known image by Marianne Stokes, that graced our Christmas postage stamps a couple of years ago.
From searching Bridgeman and the Your Paintings website (PCF catalogue online via the BBC) I think this may be the only Cooksey in a public collection, although there may be others, possibly in .  I’d love to know if anyone knows of any more of Cooksey pictures in galleries.  Anyway, on with the story…
May Louise Greville Cooksey was born in on 7th November 1878, the eldest of five children.  Her parents were Harry Smith Cooksey and Catherine Ellen Williams Cooksey.  Harry had been an agent for Mansell Brewery, but set up his own removals and storage business, first of all in a pub, then in its own premises.  Harry came from originally, but his parents had moved to Tuffley in Gloucestershire when he and his siblings were young and there he met Catherine.  They moved up to Leamington Priors, where they remained almost to the end of their lives, before moving to .  May and her siblings all attended school, with May attending the and the of Art.  In 1899, at the age of 20, May converted to the Catholic faith, being baptised at St Francis Xaviers in .  In 1901 she received a Liverpool City Travelling Scholarship which meant she could travel to and paint.  She became a member of the Liverpool Academy of Arts, living out the rest of her life at 1 Bold Place, St Luke's Chambers, Liverpool, then moving to Crosby in Lancashire, where she died in 1943.

Her work is very attractive, what you can find of it, which is why I am eager to see more.  Take, for example, this rather beautiful portrait… 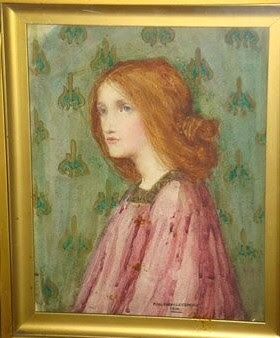 There is a rather soften-Pre-Raphaelite style to it, reminiscent of Gwen John and Eleanor Fortescue Brickdale (there are two names I didn’t expect to say in the same breath).  Also, I can recognise the style of Boyce in the patterned background and single, beautiful figure.  Her work also covered tempera-styled panels, referencing murals and aestheticism…
There are obvious parallels to the work of Sandys or Rossetti, with lush Renaissance ladies displaying their beauty.  I’m intrigued by her colour palette, seemingly changing radically from one image to the next.  Although the two ladies above are quite similar in subject and mechanics, and may even be the same model, the difference of the powder-pastels of the Honesty picture is striking when compared to the rich colour of Dolce Far Niente.  Look at the orange and blue in that dress!  Stunning.
I’m not much good with cityscapes and landscapes, I do like my pictures to be about people, but her work done while travelling is attractive and interesting.
She seems slightly impressionistic and used light well.  Venezia makes me long for summer and the glint of sunlight on a canal, although it is not that glamorous down the Kennet and on the whole.
I think where May Cooksey has suffered is that she never produced anything that was a blockbuster, she never had her one killer image that made her famous and got people collecting her art.  A possible reason for this was that she specialised in religious art during and after the First World War.  A bit like TM Rooke, that is not going to make you fashionable, however lovely your work is.  May produced a series of oils on The Stations of the Cross for Our Lady of Mount Carmel Roman Catholic Church and Presbytery in in 1928, which are on display and mentioned in their listing.

Despite exhibiting at the (possibly where Merton Russell-Cotes saw Maria Virgo) and extensively at The Walker Gallery in (great name for a gallery.  I will be up there to claim it one day), May Cooksey is one of the forgotten gems of Edwardian art, which is a shame as I want to know more and see more.
Posted by Kirsty Stonell Walker at 19:42