Beauty on a Hillside

Last time, we gazed in wonder at the work of George Frederic Watts.  This time it is the turn of the woman known as ‘Mrs Watts’, or Mary Seton Watts. Mary designed and co-ordinated the building of the Watts Mortuary Chapel, begun in 1895, and she maintained the Watts Gallery (1903-4) to preserve her husband’s work for the nation.
A short walk from the Watts Gallery is the tiny little mortuary chapel, set on a steep bank surrounded by a graveyard. If you approach the Gallery from the east, you will probably pass it on your way and do a double-take as you drive past, as there, in the middle of some fairly unassuming English countryside, sits a rouged-up Celtic wonder that is obscenely beautiful. 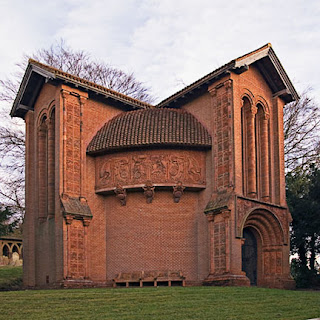 The rounded, single-roomed chapel is rich terracotta red and sits halfway up the hillside, surrounded by gravestones and yew trees. On the outside, angelic faces mingle with birds and words, swirling in Art Nouveau and Celtic symbolism that is almost too much to take in. Transepts that symbolise the cross of faith quarter the circular shape of the chapel and divide the domed roof into sections, each with a rich frieze panel beneath. 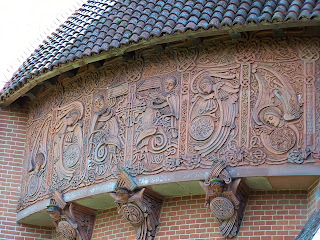 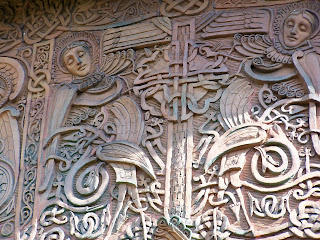 As you can see in the first picture, the frieze has angel ‘brackets’ beneath it, with words behind the angels. The main frieze has Celtic angularity which is softened by the peaceful faces gazing down, while birds and small animals clamber around in the twist of roots and shoots that make up the patterns of the panels. The birds pictured in amongst the foliage represent Hope (Peacock), Truth (Owl), Love (Pelican) and an explosion of a circle of light and stars represents holy Light.

The angel brackets, which seem to have peacock tails, hold circles that represent the Truth, the Life, and the Way.
I’m not sure where to begin with the layers and layers of symbolism on the panels, entire books are written on them, so I would not be able to do it justice in a short piece. On the face of it, the panels are simply a gorgeous riot of swirls and benevolent women, and the complexity of the scenes are a joy to behold. For the next bit, it helps to go on a very bright day. Trust me.
Then you go inside…and look up… 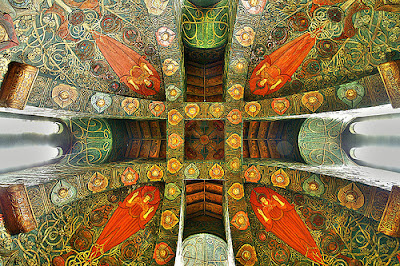 I’m not sure what I was expecting, but it wasn’t this. Oh my giddy aunt, it is just magical. Pointed arches are separated by two windows, the door and the alter, holding angels and yet more tangled vines and roots. 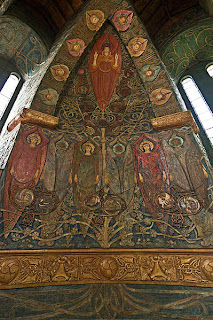 Here we go then…four large red angels are joined by four sets of six smaller angels, split into pairs. Each pair has one angel that faces you and one with its back to you and they hold a pair of medallions. The medallions represent contrasting ideas as if they are flip sides of a coin, viewed at once, so we have work and rest, life and death, night and day and so on.
The tree of life springs up through the golden band or ‘girdle’, spreading its branches through the scenes, offering bunches of grapes up to heaven. Tiny flowers, including primroses, lilies and a daffodil, dotted above the gold band were painted by the children from the village. The tiny pastel cherubs dot the ‘ribs’ of the interior and frame a central point of the ceiling. These heavy beams give the impression of riches, fortification and safety, which is quite a tradition feeling for a church, but the fact that this tiny room can impart all the above is quite an achievement.
The central point is, in theory, the alter, although it does have to compete with quite a lot of decoration to gain your attention. 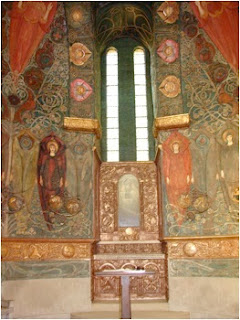 The painting behind the alter (the reredos) is The All-Pervading by G F Watts, completed shortly before he died. Mary placed her husband’s ashes in a gessoed casket she had made and placed them on the central pedestal of the Chapel. They now rest in a small, plain grave further up in the graveyard. 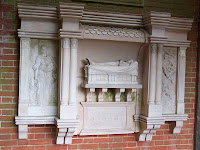 ﻿ ﻿
An easy way to spot the grave is to find the wall plaque for Watts in the covered corridor at the top of the graveyard and the grave is just outside the gates, opposite. The graveyard is definitely worth a tour as some of the graves, made in the same style as the Chapel, are stunning. 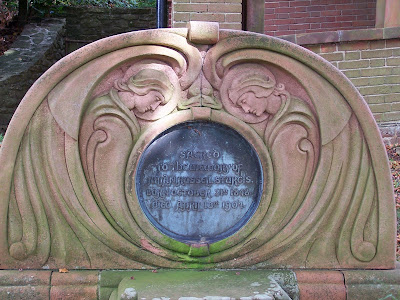 When Mary died in 1938, she was placed beside her husband in the shadow of the chapel that is her finest achievement.
There are many fine pages of images on the internet of the chapel, and a dedicated site to it. Again, like the Watts Gallery, I cannot recommend a visit too much, it is astonishingly beautiful, open daily and free.
Posted by Kirsty Stonell Walker at 20:06