I have spent a naughty amount of time recently think about being a Victorian seamstress.  Why naughty? Because it is to do with the novel I should not be writing until I have finished redrafting Stunner.  Yet I find myself contemplating the fate of a young woman, apprenticed into sewing and millinery in 1860s .  This post is my way of getting it all out of my system until after I’ve finished with the second edition of Fanny’s biography.  In theory.
Before I started my research, I didn’t have much idea of what it was like to be a Victorian seamstress.  Fanny went straight from being a housemaid to being a good-time girl, so it was never part of my research for Stunner.  I guessed it would be miserable, as most forms of work seem to have been, so I was unsurprised by the grimness of some of the illustrations I’ll show you below.  Among the pictures I found, there were also some fairly charming ones, like Millais’ Stitch! Stitch! Stitch! which is typical of his portraits of women during this period.  The loose-handling of dark paint draws attention to the pale face, seen in profile.  The girl has paused, possibly lost in thought, but the title of the picture, taken from the poem ‘The Song of the Shirt’, pushes her on in her work.  The image has a typical sort of simplicity, the focus being on her face and expression, with her hands partially hidden as they hold her work.
Oh, well this is a little grimmer.  Mother and daughter seem to be stitching but there is not enough to keep a roof over their head it seems.  At this point you have to fall back on your pitiful female state in order to persuade.  The main thing I didn’t realise about sewing was the difference between being a slop worker and working in a shop.  The character in my book works in a shop, possibly in hope of an apprenticeship, but many women worked from home.  There were positives and negatives to do with both arrangements.  To be an apprentice meant you were guaranteed food and lodgings (how much and what quality was another matter) but you were then tied to your place of work, your hours could be extended beyond reason as you were trapped.  To work from home kept you with your family, but your earnings could be much less and you risked losing your home and livelihood in the uncertainty.

Another thing that was news to me was the sneaky growth of this employment among the struggling middle-class.  Women who found themselves poor but not working class could take in piecework or ‘slop work’ and be a seamstress with a kind of respectability.  You may be working (bad) but at least you are sewing (not so bad), so doing a genteel trade which as a nice lady you would be indulging in as a hobby.  Widows and spinsters seemed especially vulnerable to the vagaries of income and so pictures such as Kennington’s could be seen as representative of their position.
The iconic seamstress poem must be ‘The Song of the Shirt’ by Thomas Hood.  It is a powerful poem that makes me smile in recognition, as it gives a timeless expression of hard work.  I especially love the passage where the seamstress admits she works so hard ‘Till over the buttons I fall asleep, And sew them on in a dream!’ which makes me think of when I type late at night and find myself dreaming that I am still typing only to wake and find I have printed the letter ‘a’ for three pages, like a long scream.  At least I won’t starve to death or have to go on the game, which is the fate that awaits these poor women who wish for one short hour of rest in their endless task, day and night.

Here we go then, first out of the stalls is Edward Radford’s lovely picture of such a sad subject.  The girl almost seems to bathe in the light, her poor belongings around her and her child asleep in her bed.  I never like to see a cracked basin in a painting, it never bodes well.  She looks absolutely exhausted, almost unable to sit up or hold her work, dressed in what Hood refers to as ‘unwomanly rags’.

This seamstress is a little better dressed, praying for an hour of peace and rest.  The green of her dress possibly refers to the rich grass she fantasises about wandering in.  Again, she is in the light by a window, possibly referring to how they are trapped inside, needing the light but unable to go outside.

Yet more mournful maidens, pausing in exhaustion and thought.  I especially love Peele’s woman’s expression and the detail in her room, although that mug on the cupboard is looking a bit chipped.  By contrast, Rossiter’s miserable girl doesn’t seem too bad, at least she gets a cup of tea and her jugs are very much intact.

That’s more like it - burnt down candle, chipped ceramics and no rug on the floor.  That’s good, old fashioned, black and white misery.  It looks like it’s about two o’clock in the morning.  I think if I was still sewing at that hour I’d want an hour off to tip-toe in the grass.  There is just no time for her to relax and on she sews until she collapses in exhaustion or goes blind.  Blimey, how grim…

Hang about, this looks like fun!  See, if you go and work in a shop it’s all gossip and jolly ribbon with your chums…I’m surprised any dresses or hats ever got made if this was the level of work that went on.
So which was the truth?  Working to death or gossiping with the girls?  Possibly somewhere in between, although the season in the Spring and Summer, then at Christmas, seemed to bring on working weeks of dizzying length. 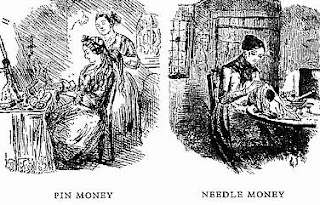 It is impressive that the level of awareness was as good as it was.  Much as we care about sweat-shops now, the concern for the well being of seamstresses seems to be very vocal and the images of broken-down women no doubt aided the strength of the argument.  Piece-workers especially seem to have been exploited with low wages and the work, although not obviously physically gruelling, was a challenge of endurance, long hours and poor light.  The desperation must have been intense and the knife-edge of work and ability must have shortened many a seamstress’ life.  Not the jolliest subject for a book, but I look forward to writing my heroine’s plight.  Type! Type! Type!
Posted by Kirsty Stonell Walker at 14:39